INTJ Loyalty: What Being Loyal Means to the INTJ 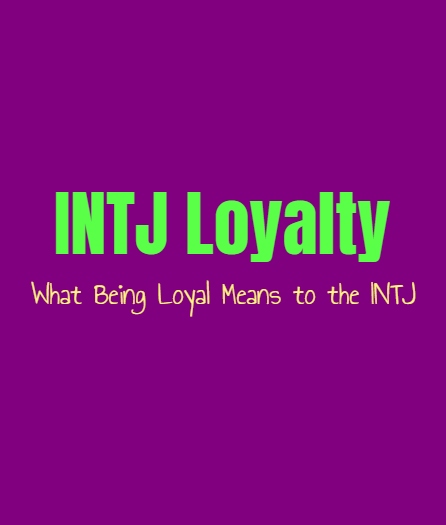 INTJ Loyalty: What Being Loyal Means to the INTJ

While INTJs might not be the most emotional people, they do have deep values which they hold very dear. When it comes to loyalty, the INTJ seriously believes in holding onto this part of themselves and searches for it in those they are close to. Loyalty is actually one of the non-negotiable traits for the INTJ, and so they believe in waiting until they find people who share this ideal. They might not be outwardly emotional and expressive people, that doesn’t mean their relationships aren’t deeply meaningful and important to the INTJ. This is why loyalty is something they believe in and don’t want to compromise on this.

What Loyalty Means to the INTJ

For the INTJ loyalty is actually a top priority when it comes to their friendships, business relationships and romantic connections. Anyone who is close to the INTJ will feel this loyalty from them, as well as this will be expected of those people in return. For the INTJ there are certain things they are searching for in their relationships and this is certainly on the top of the list. They won’t stand for people who aren’t willing to give this type of respect and loyalty, and so this is often part of why the INTJ appears so guarded. They will wait it out until they can find someone who shares these values, since the INTJ is not so desperate for connection that they will accept less than what they know they deserve and need.

For the INTJ loyalty means always being honest with one another and never hiding things which should be shared. When someone is secretive about the important things and chooses to lie to the INTJ, then they will see this as a betrayal and someone who is not capable of being loyal. This is why INTJs value honestly so much as well, since to them this ties into a sense of loyalty and respect for those around them. They believe that when someone is truly loyal they will be honest and upfront, instead of hiding things or lying to those they are supposed to care for. The INTJ won’t tolerate someone who does it, and takes this as quite the betrayal if they cannot seem to be straightforward with them. This isn’t the type of person the INTJ wants around and they definitely see this as a lack of loyalty.

The INTJ also believes that someone who is loyal will stand by them and support their choices. This doesn’t mean that person needs to constantly agree with them, as INTJs value loved ones who can debate and give them different perspectives. They want honesty no matter what, they just also believe that someone who is loyal will stand by their loved ones even when they disagree with them. They want people who will show their support and allow the INTJ to get things done on their own terms. Someone who is loyal will not betray their trust by going behind their back or by allowing someone to talk poorly about them. INTJs believe in their loved ones and want to see them succeed in the ways they know they can. This is why they don’t believe in allowing others to talk poorly about those closest to them, even if that person is making mistakes. INTJs stand by those they love, they just might try to push them to improve and be better versions of themselves in the process.

This is why fidelity is also important for the INTJ when it comes to romantic relationships. For them it is about being honest, and if they have a connection which they have agreed to remain monogamous, then nothing should stand in the way of this. Of course if the INTJ has a more open relationship that is different, but even in this case they believe in honesty and a partner who does not hide things from them. They believe in standing by their word and so for the INTJ that is a major part of being loyal and sincere with those they love. Someone who betrays their trust and does not stand by their word, is not someone the INTJ wants to waste their time and energy with. This is why INTJs don’t really want to have a lot of close relationships, since they don’t like making this type of bond without knowing they are sure of the person they are connecting with.

For the INTJ being betrayed by someone they trusted is not something they take lightly. While some might be capable of forgiveness, this is not something that comes easily for the INTJ. They don’t simply let go of a transgression, especially since it takes a lot for them to trust in the first place. Of course, small mistakes are things the INTJ can often get over, especially if they can see that this person did not intend to make these errors. Someone who is truly remorseful and can show signs of changing their ways, is something the INTJ can certainly move on from. There are more serious betrayals though, ones which show that this person really should not be trusted, and in these situations the INTJ will not find it easy to forgive. They are likely to cut people out of their lives who show that they cannot be loyal and who continue to betray the trust of the INTJ. While this might be difficult and certainly will hurt for the INTJ, they don’t want to be foolish and allow emotions to prevent them from making the smart choice.