ENFJ Loyalty: What Being Loyal Means to the ENFJ 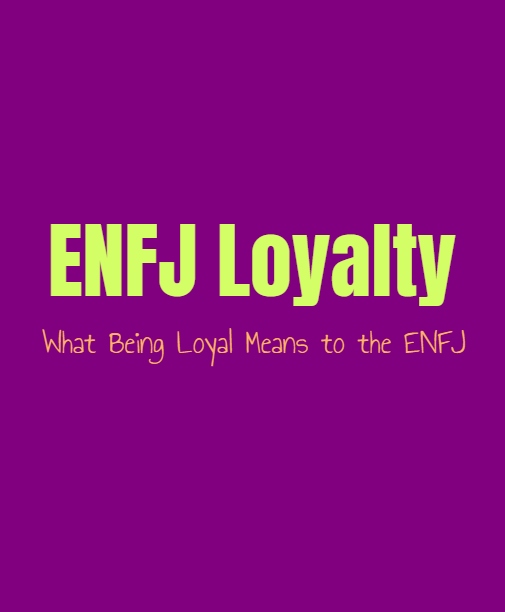 ENFJ Loyalty: What Being Loyal Means to the ENFJ

For the ENFJ loyalty is truly important, since they take their relationships seriously. When they make a commitment they don’t believe in allowing anything to stand in the way of this. For the ENFJ their connections and their loved ones are truly the most important things in their lives, this is why loyalty is something they value and hold dear. This is something which can be overwhelming for the ENFJ, since they hold such a high importance to making their loved ones happy and always being able to be there for them no matter what this means for their own personal needs.

What Loyalty Means to the ENFJ

For the ENFJ loyalty means being there for someone no matter what, and always being their support. For the ENFJ loyalty is something which should hold rather high standards for its definition. They don’t just see it as something small, for the ENFJ loyalty is a big deal and should be held as something valuable and meaningful. They believe that if you are loyal to someone, you should stand up for them when others do not. It means defending that person, and even fighting for them against people who seek to cause them harm or put them down. The ENFJ believes that you do not turn your back on someone you love, even when they are struggling or making mistakes in life. So long as that person does not betray the ENFJs trust, then they will remain loyal and be there for them even when they struggle and fail at their tasks in life. For them loyalty is not something you can only have sporadically, and should be unconditional.

ENFJs also believe that loyalty means being supportive of this person, and being there to help when they can. ENFJs go out of their way to take care of their loved ones, and don’t believe in doing anything less. They care deeply for the people in their lives, and prioritize their happiness above everything. This is why loyalty is so valuable for the ENFJ, and is something they search for in relationships. They don’t want to be without loyalty in their relationships, especially when it comes to romantic connections. For the ENFJ fidelity is also a major part of loyalty, and they really want their partner to be capable of remaining faithful to them no matter what. For the ENFJ this is about trust, and not wanting someone who will betray this. They believe in being honest and open with their loved ones, as this is part of being sincerely loyal to them.

ENFJs only hold such high standards of loyalty because they believe in valuing their relationships. They want to be someone who can always be there for those close to them and they want something close to this in return. ENFJs might struggle when it comes to flirting and don’t necessarily see being friendly as being disloyal. For them it is more about standing by someone and always showing their support and love no matter what. They don’t have these standards in an unrealistic manner, they just want to have connections which are important and don’t consist of betrayal which leaves them feeling hurt and distant. ENFJs don’t want to be betrayed by the people they love, and so they strive not to betray them as well. For them it is important to avoid hurting people, especially the people they care for most. They want to protect their hearts and be the person who makes them happy, not causes them pain.

ENFJs struggle with betrayal, especially from the people they love and trust most. This is something which causes the ENFJ immense pain and they will often try their best to decide whether or not they should forgive or if the betrayal is too much. When the ENFJ realizes this person is going to continue to hurt and betray them, they are capable of shutting them out of their lives. This is a decision which takes a lot of time and pain for the ENFJ to come to, as they don’t like letting go of people they love. The ENFJ simply realizes that they need to give themselves to people who are appreciative of this gift. When they see that someone is going to continue to betray them and is not capable of true loyalty, then they will do their best to let go and move on from this relationship. ENFJs don’t come to this decision lightly, and this betrayal is something which will likely sit with them forever, even if they don’t show this to others. ENFJs don’t really handle betrayal well at all, but this is understandable since they give so much to the people they love. ENFJs go out of their way to constantly provide for the people around them, and are often very focused on their well-being.