Do You Like Being Accessible to Others, Based on Your Personality Type 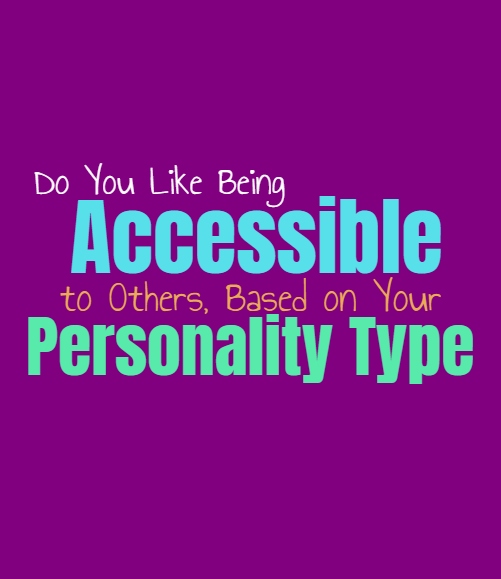 Do You Like Being Accessible to Others, Based on Your Personality Type

Some people want to be more accessible and open to those around them, while others prefer a bit more space and don’t really want to be all that approachable. Here is how much you like being accessible to others, based on your personality type.

INFJs do want to be accessible but might have a hard time opening themselves up to this. They want to be open to people and connecting with them, but it can be difficult. INFJs can be afraid of taking risks and of really being vulnerable, so they appear a bit more closed off at times and less accessible than they might want to be. For the INFJ making themselves more accessible just means being less fearful of getting hurt, since they are naturally empathetic people who others can easily feel connected to and drawn to.

ENFJs are often very accessible people, who try hard to connect with others. They want to be someone that others can feel comfortable and open with. For the ENFJ it is important to make sure others feel completely at ease around them, and feel safe approaching them. They want to be accessible to the ones they love, especially the people who they feel need them and their guidance. ENFJs can become wrapped up in other things but they don’t want to ever seem like they are too busy for others.

INFPs often appear more accessible depending on their mood and what is going on inside of their minds. When they are so wrapped up in their own inner worlds and really just want to be alone, they do often appear much less accessible but this is done intentionally. During these times the INFP just wants to be on their own and really doesn’t want people invading their space. Other times when they are receptive to connecting with others, this will show outwardly since INFPs are expressive and sincere people.

ENFPs do appear rather accessible most of the time, unless they are in a sincerely bad mood. When they are feeling a bit grumpy or distant, then this shows outwardly and makes them seem a little bit standoffish. When the ENFP is feeling like their normal bubbly selves, they certainly appear accessible and truly receptive to making connections. ENFPs are outgoing people who do enjoy making friends and getting to know people. This sense of openness and vibrancy makes them much more accessible than some other types.

INTJs don’t really want to appear that accessible most of the time, since they prefer their space. There are times when they are receptive to connecting with people and definitely want to be more accessible. INTJs just aren’t naturally open people, and can be closed off even during times when they don’t want to be. It is easier for them to keep their distance most of the time, since they prefer to have time to themselves to think things through and not feel overwhelmed by the needs of those around them.

ENTJs do sometimes seem accessible to others, especially when they are open to making these connections. They are outgoing people but they also have times when they want to focus on getting things done. When the ENTJ is focused and in work-mode they often appear less accessible and maybe a bit intimidating for some people. They don’t intend to seem this way, they just believe in being efficient and focused when they are trying to get something done a certain way.

INTPs don’t always appear that accessible to others, since they can be a bit closed off. INTPs are very much inside of their own minds, and this can make them seem distracted. When the INTP is buried in their thoughts they often appear standoffish and possible intimidating based on their outward expressions. While the INTP might be open to connecting with people it doesn’t always show this way to those around them. Because of their naturally internalized personalities, the INTP doesn’t always appear that accessible to others.

ENTPs are complex people who can often seem to be two things simultaneously. They are often rather outgoing and social, which does make them seem accessible in some situations. There are other times when the ENTP is so focused on something and caught up in their own heads, that they seem distant and even a bit aloof to those around them. They are complex people who don’t really find it all that easy to express their inner emotions, and so they might not always be that accessible because of this.

ISTJs don’t want to appear to standoffish, since they care about making the right connections. At the same time they don’t like when people invade their space, especially when they are focused on something. When the ISTJ is really focused on getting something done then they don’t appear very accessible, and often seem distant and distracted. For the ESTJ it is important to find balance in their lives, but being accessible isn’t always the most important thing.

ESTJs don’t always care that much about being accessible, since they prefer to focus on getting things done. When they have a lot they are focusing on the ESTJ doesn’t want anything to get in their way. They are efficient people and so sometimes this can be intimidating to those around them, making the ESTJ seem a bit less accessible.

ISFJs want to be accessible people, and they care about being open to those around them. They want to be someone that others feel safe around, and feel like they can approach them for anything. For the ISFJ it definitely is important to be accessible, especially to the people they truly care for. They don’t really want to feel like their privacy is being invaded, but ISFJ don’t want to let anyone down so they often compromise their own needs for this.

ESFJs do want to be accessible, especially to the people they care for or want to connect with. ESFJs want to show others that they are accessible and someone that they can come to when they need to. They want to make those around them feel comfortable and safe approaching them for anything. For the ESFJ being accessible is important because they are naturally people-pleasers, who care about making those around them happy and at ease.

ISTPs don’t really want to appear all that accessible most of the time, since they enjoy their space. They often appear aloof to those around them, and this is somewhat intentional and somewhat natural. ISTPs just don’t want to be completely open to others because they prefer to have most time to themselves without others trying to constantly demand something from them. ISTPs care about people, they just need to have distance to make their own choices.

ESTPs do care about being accessible when it comes to the people they love or care for. When it comes to strangers the ESTP doesn’t want to be completely accessible, since they can become impatient with some people. They are often this combination of social and distant, depending on the mood they are in and the people they are around. ESTPs do want to be accessible to their loved ones, but this isn’t always natural or easy for them.

ISFPs want to be accessible to the people they care for or are attracted to. When it comes to being open and accessible, the ISFP just wants to let this happen naturally. There are times when they might seem a bit aloof because of the fact that their minds can often wander in so many different directions. They want to feel free to explore different choices and options, but they do also want to be accessible to some extent.

ESFPs are outgoing and open people and so being accessible is important to them to some extent. ESFPs do want to maintain some sense of mystery when it comes to someone they are trying to attract, but most of the time they do like being accessible to others. ESFPs just want to connect with people and enjoy living in the moment without any restrictions. For them being closed off to others is something which can hold them back from really experiencing life the way they want to.