How Good You Are at Stalling, Based on Your Personality Type 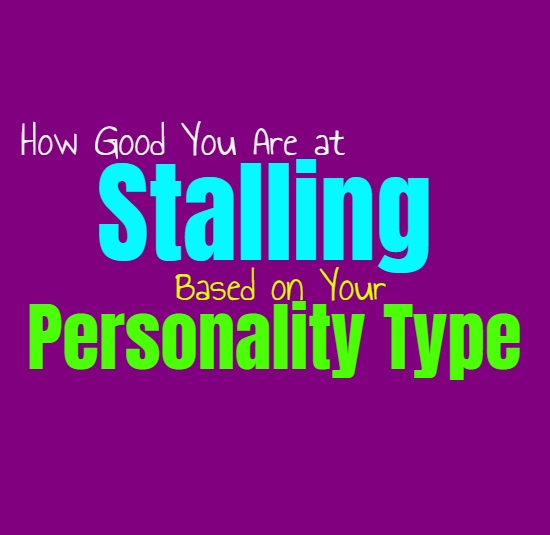 How Good You Are at Stalling, Based on Your Personality Type

Some people are great at stalling or holding things up when they need to. This can make them great at dragging the work hours out, or putting off doing certain things until they really need to. This can be a useful skill for some people, but for others it seems challenging to really utilize this. Here is how good you are at stalling, based on your personality type.

INFJs are certainly good at stalling, especially since they can easily drag things out for a while. They can often take one small details and analyze it and discuss it on a much larger scale. They can often take a small detail and find ways to really stall the conversation or situation for a rather long time. INFJs are good at this because they despise small talk, and so they can find something more valuable and complex to discuss which can go on forever. INFJs also know how to procrastinate or stall doing something, especially when they really don’t want to do it.

ENFJs are often capable of stalling when they absolutely have to, but it isn’t necessarily something they enjoy. ENFJs do focus on getting things done and can become a bit antsy when there are things they need to take care of. On the other hand there are circumstances where the ENFJ needs to stall or keep things going for a while, and they can often be very good at this. ENFJs are charismatic people and this helps them figure out the right things to say in order to keep things stalled for a while.

INFPs aren’t necessarily fans of the idea of having to stall a situation or person, but that doesn’t mean they cannot be excellent at it. INFPs are masters in the art of procrastination, and so they know exactly how to drag things out for a long time. They might have something they are trying to put off, and so they can find ways to really stall this for a rather long time. INFPs can do this by conversation as well, and can find so many in depth things to discuss for what seems like forever.

ENFPs can certainly stall a situation if they want to, and they are especially good at procrastinating. When the ENFP doesn’t want to do something they know exactly how to drag the situation out for as long as they need to. They are also rather charming people and this helps them to distract people and keep them entertained so they don’t realize that the ENFP is actually stalling something. They also know how to find other ways to keep themselves distracted, and can easily stall things for a long time.

INTJs don’t like procrastinating, especially with things they feel are deeply important. They will however do their best to stall if it is the most logical decision to make in that situation. There are times when they need to stall someone in order to get something properly done in time, and they are not opposed to doing whatever it takes. For the most part INTJs don’t stall simply because they want to procrastinate, since they actually enjoy being able to dive into things and really get them taken care of the right way.

ENTJs don’t really like having to stall things, since they believe in moving forward. They don’t want to feel stalled by things, they would much rather push forward and find ways to finish the job efficiently. There may be situations where the ENTJ does need to stall in order to take care of something important, and they are capable of this. When it is completely necessary ENTJs will find a way to stall the situation, sometimes using their ability to openly converse with others in order to keep them distracted on a more complex subject.

INTPs are often great at procrastinating and so this helps them to stall when they need to. INTPs can often drag things out for a long time, especially when they feel it is needed in a situation. They can talk about many different subjects and have rather creative inner minds. This sense of creativity is exactly what helps the INTP to stall things and really drag the situation out further. INTPs often find ways of stalling when they don’t want to do something, and will try their best to really keep everyone and themselves distracted.

ENTPs are often great at stalling things, since they do have a tendency to procrastinate. When there is something the ENTP just doesn’t want to do, they can often stall for a rather long time. They use their creativity, as well as their sense of charm to really keep people distracted and focused on something else. When the ENTP really needs to stall they have plenty of tricks up their sleeve in order to keep things from progressing for a while. This often depends on the circumstance and if they want to stall things, but they are definitely capable of it.

ISTJs don’t really enjoy stalling things or people, since they prefer to focus on efficiency and getting things done quickly. Having to stall often means something hasn’t been taken care of properly, and for the ISTJ this can feel a bit like a failure. They want to really focus on moving forward and don’t like when things are held back. ISTJs are not usually procrastinators, since this can actually stress them out more than anything else.

ESTJs usually don’t like stalling things or being stalled, they would much rather focus on moving forward. They believe in always striving for efficiency and so if they feel like they have to stall progress it often feels like they have failed. For the ESTJ being held back from getting things done is frustrating, which is why they really don’t like procrastinating anything. There may be things they don’t really want to do, but for the ESTJ having this hanging over their head is actually more stressful.

ISFJs don’t like having to stall things, especially since they believe in getting things done with a sense of pride. For them it is best to finish their projects and chores, instead of finding ways to put them off. There may be instances when they need to stall someone for the sake of someone they love, and they can actually be rather good at it. ISFJs will do their best to make small talk and really drag the conversation out for a while, ultimately stalling someone from doing something. They can also stall something by coming up with useful excuses and things they can do instead.

ESFJs can actually be great at stalling, especially when they feel it is necessary. There might be situations when a loved one really needs to stall an individual or event, and the ESFJ will do their best to take care of this for them. They are good at making conversation with people and will try to really drag things out for as long as they can. ESFJs can be surprisingly outgoing and charming people when they want to be, especially when they are doing it for someone they love.

ISTPs are actually really good at stalling, especially when they are trying to procrastinate something. When the ISTP doesn’t want to focus on a certain thing they are excellent at drawing attention elsewhere. They aren’t afraid of people recognizing their procrastinating, but sometimes it is easier to avoid this and simply find ways of stalling or distracting others. When the ISTP really wants to stall a person or situation, they will use just about every trick they have in order to do this.

ESTPs are actually great at stalling and can do this for a rather long time. They are natural procrastinators who really don’t like feeling rushed to get certain things done. When the ESTP wants to drag something out or really put something off, they will do their best to keep people distracted and stall the situation. They know how to use their charm and even be a bit humorous in order to keep people from noticing just how much they are stalling.

ISFPs are often capable of stalling when they need to, but don’t really like feeling like they are being insincere. Most of the time they just make it clear that they aren’t ready to do something, and people will have to accept this. When the ISFP does feel like they have to stall in order to avoid something, they will do their best to simply keep people distracted, or find other ways to keep the situation stalled for a way.

ESFPs are really good at stalling or distracting people, since they are natural procrastinators. When they want to drag something out for a while the ESFP simply uses their sense of humor and their outgoing nature in order to keep people focused elsewhere. They know how to keep conversations going with ease, and can often stall people without them even realizing what the ESFP is doing. They are good at keeping people distracted, and can often stall for a rather long time.