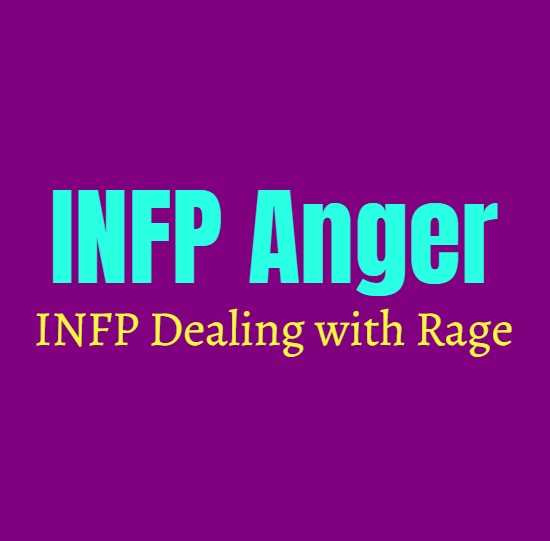 INFPs experience their emotions on a deep and rather powerful level, which makes them all somewhat intense. While INFPs want to avoid giving into anger, that doesn’t make them impervious to this emotion. Being someone who feels everything so deeply, makes it impossible for them to avoid some moments of rage or anger. For the INFP feeling overwhelmed by these types of emotions can be difficult, since they don’t want to allow anger to take control. They want to focus on things which are more positive, and can feel a sense of guilt for these types of feelings.

INFPs are not immune to feelings of anger, they simply try not to let themselves become overwhelmed by it. INFPs want to focus on their positive experiences and emotions, and can actually feel guilty when they allow anger to take over. Most of the time they are capable of controlling themselves, more so than people often realize. Because INFPs are so used to placing focus on their own emotions, it actually causes them to understand them better. Understanding where their anger is coming from can really help the INFP to process this in healthier ways. They will recognize those feelings and try to express them without allowing it to get out of hand. Once this happens they can find distractions or ways to move on from those momentary frustrations. While others might find it hard to really let go because they struggle to understand their own emotions or where they are really coming from. INFPs spend so much time in their own thoughts and feelings, and this actually helps them become better equipped to handle what they are experiencing.

While most of the time INFPs prefer to be in control of their anger, there are certainly times when this gets away from them. When someone truly betrays them, or attacks their character or someone the INFP loves, they can become truly angry. This is when the INFP can actually snap and unload on someone, using some of the sharpest and most pointed words in order to tear them down. This is not something which happens often, but when it does most people are shocked or even frightened with how intense the INFP can be. They experience all emotions on such a powerful level, that when they feel justified in this anger it can actually be somewhat overwhelming for those around them. After this is over the INFP feels emotionally and even physically exhausted by the experience, and might even feel guilt over it. Even though they only do this when it is justified for them, they still don’t feel happy hurting people. INFPs are more likely to be okay with the outburst if that person has harmed someone they love and care for, as they can be rather protective in these situations.

Coping with the INFP Rage

The aftermath of the INFP rage is often what is most difficult for them. INFPs feel a sense of guilt when they hurt others, even though it feels right in the moment. When the INFP does explode on someone it is often deeply justifiable for them, and comes from a place of feeling like they need to do this. They express anger towards a person who has truly wronged them or crossed a line they should not have crossed. The INFP in that moment believes it is the right thing to do, in order to set this person straight. They often want that person to realize what they have done wrong, and so they are very precise in the way they strike them down. This is something which the INFP rarely does, but when they do it is fierce and direct. It often leaves them feeling overwhelmed and emotionally exhausted, and they need to retreat for a while afterwards. For the INFP this is something which they can certainly feel bad about, since they don’t like causing harm to others even if they know it was the right thing to do and would not go back on their choice.

The most important thing for the INFP is to process their emotions, rather than allow others to force them to bottle it up. They need to be open about their feelings, even if they are only slightly angry or frustrated over something. Being free to vent or express things, helps the INFP to let go and really process what they are going through. Sometimes this means allowing themselves to share those feelings, other times it means being alone for a while to process them. When the INFP is alone they are using this time to filter through their many thoughts and emotions, and this is something which helps them work through what they are experiencing. After this time alone they can better decide how to deal with their anger, sometimes this means expressing their frustrations towards the person who made them angry. For the INFP this is the healthiest means of dealing, and can help them to move on much faster. Instead of some people who prefer to bottle things up, INFPs just don’t function properly this way. They need to be free to be themselves and to express their feelings when the situation calls for it. They want to be safe in doing so, or else they can become stifled and feel trapped.