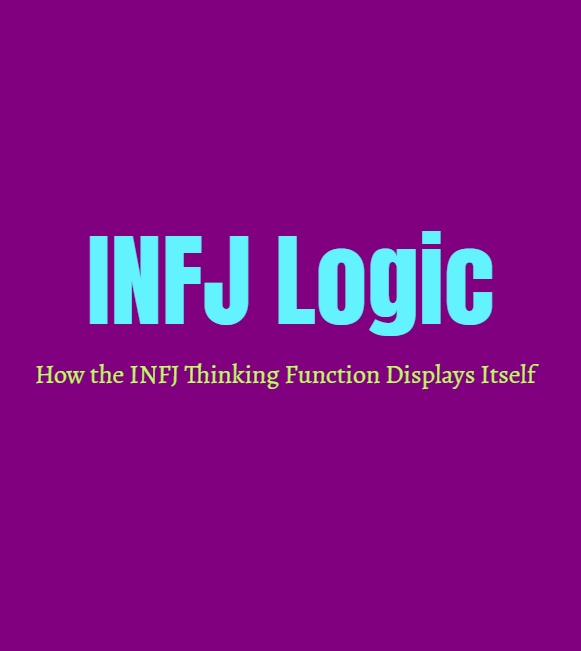 When it comes to logical thinking the INFJ is often pegged are more focused on emotions, but this is a misconception. While INFJs might not use their thinking function high up in their function stack, it is still an important part of who they are and how they respond to the world. The INFJ uses introverted thinking as their tertiary (third) function, and so it often displays itself in unexpected ways. This is why understanding how the INFJ really responds to logic and uses all of their functions is truly important in understanding them. They can often be viewed as contradictions, and the way they think and use logic is often just another part of this.

What many people don’t realize about the INFJ is that they are often very focused on logic and internal thinking, more than most feeling personality types. When the INFJ is around other people they do focus on tending to their needs and their emotions, since they are so naturally in touch with the feelings of others. Being that the INFJ spends time focusing on caring for others, causes people to see them as only emotionally based people when this isn’t true to who they are inside. INFJs care about others, but the way they behave when they are alone is often much different than how they are around other people. This is part of what makes the INFJ so difficult for people to fully understand, since they behave differently around others than they do when they are by themselves or around someone they completely trust. INFJs might care about the emotions of others, but they are actually one of the least emotional feeling types. The INFJ uses critical thinking skills to make most of their decisions, especially when those choices won’t affect anyone else.

INFJs use their introverted thinking in connection to their introverted intuition, which can sometimes create a loop and this is often what causes the INFJ to go into their own little world for long periods of time. Their dominant function is actually their introverted intuition, which is how the INFJ absorbs and understands the world around them. This intuition is what guides their choices and helps the INFJ come to useful conclusions about future outcomes. While this intuition is a big part of them, it also works quite a bit in connected to their introverted thinking function. The INFJ analyzes information and ideas for long periods of time, and actually enjoys absorbing information and facts. INFJs spend a lot of time researching and reading about new ideas and this is what makes them very intellectual people. Many people don’t realize just how much the INFJ craves knowledge and information, and why they enjoy spending so much time alone often reading and researching different things. INFJs actually aren’t all that connected to their own inner emotions, instead they spend more time focusing on their inner minds and all of the information and ideas floating around in there.

The INFJs introverted thinking is often more displayed in school or work settings, where they can express their knowledge base clearly. These settings are meant to focus more on information and facts, rather than the emotions of others. When the pressure is off the INFJ to tend to the needs of others, their introverted thinking skills can come into play in much more obvious ways. They might enjoy debating the information and expressing just how knowledgeable they are about something. The INFJ also has a tendency to do very well in school and in work settings which allow them to showcase their knowledge, and this is often an obvious way in which their thinking function expresses itself. The INFJ can be rather factual and actually enjoys using logic as a means of making decisions. The INFJ just doesn’t do this because they favor the needs of others over their own desires and wants in life. INFJs are definitely capable of using a sense of logic and they do enjoy utilizing their introverted thinking function alongside of their strong introverted intuition.

While INFJs might utilize introverted thinking in many ways, they still favor intuition as well as tending to the needs of others. When the INFJ tries to use logic more dominantly, they find themselves experiencing guilt over this. They care about their loved ones and want to make them happy, and this is often the most important thing for the INFJ. The battle between the heart and the head becomes a real struggle for the INFJ, especially when they feel a sense of guilt from the people closest to them. While they might want use their minds and sense of logic to make choices, the INFJ is driven by a desire to care for others. This feeling of wanting to end the pain of those around them, is something which often dominates their decision making even when they don’t entirely want it to. INFJs might be logical minded people, but this doesn’t always come to the forefront in ways that people recognize or understand.