Would You Make a Good Liaison, Based on Your Personality Type 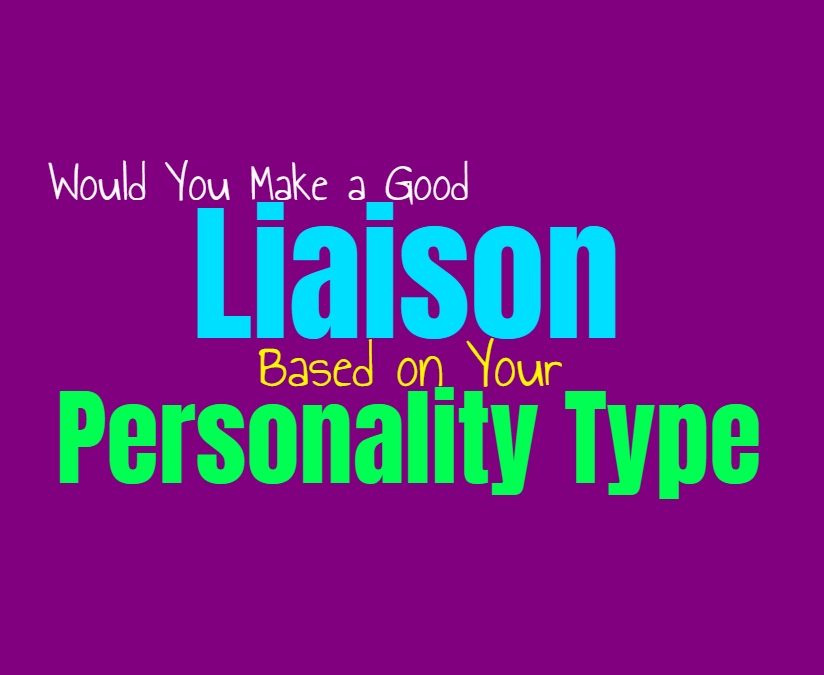 Would You Make a Good Liaison, Based on Your Personality Type

Some people are good at being the go between and this helps them become a good mediator or liaison in many situations. Others find it difficult to be the go-between and might find it stressful. Here is how good you would be as a liaison, based on your personality type.

INFJs are often good at being the go-between when they have to, but sometimes this type of job can feel overwhelming for them. They are capable of understanding both sides of the situation, and this is what helps them know how to be the middle person. They can connect with both people and find a way to bring them together so they can understand the goals of the situation. While INFJs are good at being this go-between, they do become drained with this type of constant interaction though and it might be difficult for them.

ENFJs are very capable of being liaisons, since they are good at being the person who helps bring others together. They know how to understand and connect with people, even the ones who seem a bit odd. ENFJs can connect with people and help them reach a better understanding of those around them. They know how to bring people together and so this is something that helps them be good as a liaison, or a go-between.

INFPs don’t often enjoy being the liaison in a situation, as this type of position is a bit draining for them. Having to be the go-between for others can leave the INFP feeling like there is just too much pressure on their shoulders. They need a more creative outlet than this, and can become stressed with this type of career. INFPs can connect with people, but they don’t often know how to be the one delivering messages back and forth.

ENFPs are often good at connecting with people, and this does help them in a position as a liaison. The part ENFPs are good at, is smoothing things over if the situation isn’t going as expected. They can make people feel happier about something, since they are charming and outgoing people. Where they struggle is when it comes to being able to really understand every situation, since they have such strong morals sometimes it leaves them disconnecting from certain people and ideas.

INTJs aren’t really fans of being in a liaison position, mostly because being the go-between is draining for them. INTJs are often the people on one end, who are requesting someone to liais for them. INTJs don’t like having to deal with constant social interaction and become drained if they have to do this for too long. They know how to get things done but would often prefer to avoid having to deal with people, since they can become short-tempered with inefficiency.

ENTJs can be good at being the go-between if need be, but they don’t necessarily do this in a soft or diplomatic manner. They are often better at being efficient and getting things done themselves, and make for good leaders because of this. ENTJs don’t like feeling forced to be the go-between, but they will take on this job if they have to. They are often the people who hire a liaison to help them make peace and merge groups together in order to follow through with their plans.

INTPs definitely aren’t made for being a liaison, since they don’t often like dealing with people. They prefer to focus on doing things their own way, and might actually be the type of people who require a liaison themselves. INTPs are creative people with vast inner minds filled with so many different ideas and possibilities. This helps them create new things and really be capable of coming up with different possible paths to take, but they aren’t great at dealing with people and will often prefer to have others help them.

ENTPs can be good at being liaisons if they have to, mostly because they are naturally charming people. They are good at connecting with others and can often find the link between them. ENTPs don’t much enjoy being in this type of situation though, since it becomes a bit draining after a while. They do their best to experience new things and to push themselves to improve their abilities. They might force themselves to be a liaison for someone, but after awhile they will find themselves jumping to something else.

ISTJs don’t really like having to be the go-between, mostly because they become drained by too much interaction. ISTJs do their best to get things done and don’t like feeling like there is anything they can’t do. If they have to become good at being the liaison for someone, they will do their best to learn how to handle this job. While they might be capable of it, this isn’t something they are all that interested in.

ESTJs might not be great at being the liaison in certain situations, mostly because they can be a bit tactless. This type of position often requires smoothing things over and even embellishing a bit, and ESTJs don’t like feeling like they are being insincere. They would much rather be honest and direct, so that they can focus on getting things done efficiently. For the ESTJ having to mess around with being tactful and sensitive, isn’t really natural for them.

ISFJs can certainly be good as liaisons, mostly because they are compassionate and empathetic people. They are good at understanding all of the different reasons behind people’s actions, and do their best to connect with others. This helps them when it comes to being the go-between and they do their best to bring people together. ISFJs want to make peace with others and so they can be skilled at helping them connect and understand each other.

ESFJs often make for excellent liaisons, especially since they are good at connecting with and understanding people. ESFJs really enjoy bringing people together and want to do their best to make others happy. They know how to be the go-between in these types of situations and can often help people understand each other and create a sort of connection between them.

ISTPs certainly wouldn’t enjoy being a liaison, since it requires them to communicate with people far too often. ISTPs enjoy their space and quiet, and having to constantly interact or help people understand each other, would be draining. ISTPs are factual people and so on some level they could use this to be a mediator, but it isn’t something they would enjoy all that much.

ESTPs wouldn’t really enjoy being a liaison, simply because they do have a tendency to become short with people. They don’t really have a lot of patience, and can become frustrated when people don’t listen or understand them. ESTPs do their best to connect with people, and they do have naturally charming personalities. While they will try to be the liaison in a situation, sometimes they find themselves being a bit tactless and distracted.

ISFPs don’t really enjoy being the liaison in a situation, since they often prefer to keep to themselves. Feeling forced to smooth things over can feel a bit insincere, especially if they don’t believe in what people are telling them to do. ISFPs will do their best to bring people together, but this isn’t something they feel natural doing. They would often rather find the people they connect with, and focus on them.

ESFPs can be capable of being a good liaison, mostly because they are friendly and outgoing people. They enjoy connecting with others and are good at using their charm to smooth things over. If things get a bit rocky the ESFP will do their best to make the situation better and will try to bring both sides into an agreement. They do this by trying to make the situation more lighthearted and fun.