Here’s What Your Corny Side is Like, Based on Your Personality Type 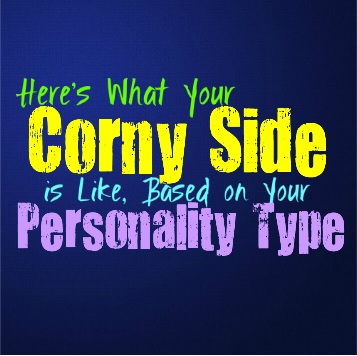 Here’s What Your Corny Side is Like, Based on Your Personality Type

While some people don’t like to think of themselves as being corny, we all have a bit of a corny side to us from time to time. This part of our personality often comes out in different ways, and sometimes it is kept completely hidden from others. Here is what your corny side is like, based on your personality type.

INFJs often do have a bit of a corny or cheesy side, they just don’t like sharing this with most people. They often keep their more vulnerable traits to themselves, fearing how people might react. When the INFJ does trust someone they can express this side of themselves, showing their corny interests and behaviors. They might consider themselves someone who enjoys looking at things from an artistic standpoint, but that doesn’t mean they don’t have the occasional guilty pleasures. INFJs might enjoy corny movies simply because they make them smile. Sometimes the sincerity of something is what makes it seem corny, and that is often what INFJs like about it.

ENFJs don’t usually mind being a little corny from time to time, especially if it makes someone smile. Their main focus is taking care of their loved ones, and they dislike doing anything that goes against this. ENFJs care deeply about others and do their best to please everyone in their lives. When the ENFJ is drawn to something corny or cheesy, they are rarely embarrassed by this. They might even be the type to have a corny sentence hanging in a painting on their wall, since they enjoy the sincerity of it. ENFJs want their lives to be filled with love and joy, and they don’t mind if that seems a bit corny sometimes.

INFPs don’t mind being corny, since it often means being completely sincere. They try to be as original as possible in what they do, but sometimes they can be drawn to things that are a bit corny or cheesy to others. INFPs just want to follow their hearts and do what feels right to them, no matter where that leads. If they find themselves fulfilled by something that seems corny to others, they aren’t afraid to be honest about it. They enjoy the occasional poetry, song or movie that might be corny, and these are often their guilty pleasures.

For the ENFP it is important to be original, but this is something they do naturally. Just because they like to branch out and experience new things, doesn’t mean they don’t have moments of being corny. When the ENFP expresses their feelings and deep sentiment, it can seem corny to others. This is simply because they don’t understand how sincere the ENFP is being and how deep their feelings truly run. They can be hopeless romantics and this is often how their corny side will present itself. It comes out when they feel strongly about someone and want to express these emotions outwardly.

INTJs try to avoid being corny, especially in front of others. They don’t like exposing anything that might seem like a vulnerability, especially around people they don’t entirely trust. INTJs often keep most things to themselves, and this means keeping their emotions inside as well. While INTJs are seen as stoic and focused people, that doesn’t mean they completely lack a corny side. They can be a bit corny when they openly express their emotions about someone they love, which is what makes them fearful of showing others this side of themselves. INTJs often have artistic souls, they just don’t show this to everyone they know- often the complexities inside of them are truly surprising.

ENTJs don’t often seem corny to most people, and they usually hide this side of themselves. They are focused on getting things done and don’t want anything to stand in their way. Most ENTJs are very guarded with their emotions and some of the more vulnerable aspects of their personality. They don’t want to expose anything that might appear as a weakness to those around them. ENTJs have a hard time letting people see any corny sides of themselves, but sometimes they do open up. They might seem a bit corny when they truly express their feelings towards someone they are in love with, which is why they often hide this.

INTPs do have some corny parts to themselves, especially since they are drawn to different things. They don’t like being pegged into one thing, and want to be able to expand and grow. INTPs can be seen as serious and intense people, but deep down they can be playful and even a bit corny. For them it depends on who they are around, and if they feel like they can actually trust someone to be vulnerable around them. The corny side of the INTP can often be just them making cheesy jokes, or even expressing such sincere emotion out of nowhere that it does seem a bit corny.

ENTPs can be a bit corny simply for the fun of it, especially when it comes to their humor. They enjoy being able to explore different sides of themselves and don’t like feeling stagnant. ENTPs don’t mind being corny once in a while, since they would rather play these other sides just to see how people respond. ENTPs also can be a bit corny when they care for someone, since deep down they are often hopeless romantics.

ISTJs don’t really appear corny to most people, especially since they can be a bit stoic. ISTJs don’t really expose their vulnerabilities to most people, and prefer to keep to themselves. They can be a bit different with their loved ones though, and will show other parts of themselves when they become more comfortable. ISTJs can be corny when it comes to the movies or shows they are interested in, and these will often be their guilty pleasures. ISTJs can also be corny sometimes with their sense of humor, especially with people who respond well to it.

ESTJs usually try to hide their corny side from people, since they aren’t really comfortable being vulnerable in this way. When the ESTJ trusts someone they can often show a corny side of themselves, especially when expressing their emotions. They are caring people but they don’t like having to expose themselves and this often is challenging for them. ESTJs can also have a corny sense of humor sometimes, making a few “dad jokes” for the sake of entertaining others.

ISFJs often do like things that are a little bit corny, since they are sentimental people. They don’t mind when something seems corny, especially if it feels sincere and heartwarming to them. ISFJs enjoy being around people who are comfortable with their corny side, and feel more at ease around them. The corny side of the ISFJ can present itself with their sense of humor, or their interest in movies and books. They feel connected to things that are deep and sincere, and really don’t mind being cheesy sometimes.

ESFJs can definitely have a corny side, which expresses itself in different ways. They don’t always enjoy sharing this with people though, especially if they feel like they will be judged. ESFJs might hide their corny side from most people, especially the ones who they don’t feel will accept it. When they are completely comfortable with someone then they can expose their corniness, which often lies in their interests. The ESFJ might like movies or even collecting things that seem a bit cheesy to others, but this comes from a deep sentimental place inside of them.

ISTPs don’t really behave as corny people most of the time, since they keep to themselves a lot. They can be a bit stoic around most people, and aren’t really viewed as expressive people. They do however have moments of being corny around the right people, especially with their sense of humor. ISTPs are themselves regardless of what other people think, and don’t like having to pretend to comfort others.

ESTPs don’t mind being corny around the people they love, especially or the sake of humor. Most of the time though ESTPs are seen as stoic and even a bit mysterious around most people. Their corny side is something they only share with a select few people who are deeply special to them. They don’t like feeling exposed in most situations and would rather be viewed as “cool” to strangers. Their corny side can be affectionate and silly, and they might enjoy expressing their emotions in a somewhat lovey and corny manner.

ISFPs don’t mind being a bit corny, especially when they are expressing their feelings about something. They are sincere people who don’t want to hide themselves in an effort to be seen as “cool”. ISFPs can sometimes be corny just for the fun of it, especially if it entertains their loved ones. They want to express themselves in an open manner, without having to pretend or hide who they truly are. ISFPs are definitely corny sometimes, mostly because they follow their hearts no matter where it might lead.

ESFPs usually aren’t afraid of expressing their corny side to others, and might even like sharing this. They are open about who they are and what they enjoy in life, and don’t want to hold back to impress others. ESFPs are fun and loving people, who live in the present and simply want to make the most out of life. When the ESFP is corny it can be expressed in their sense of humor, or possibly their interest in movies and TV shows.