Can You Handle an Emotional Roller Coaster, Based on Your Personality Type 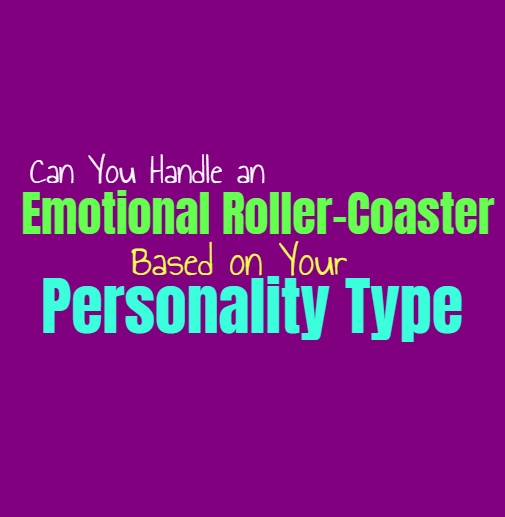 Can You Handle an Emotional Roller Coaster, Based on Your Personality Type

For some people going through the ups and downs of an emotional roller-coaster is both exhausting and upsetting. For others it is more thrilling to experience these emotions than to feel stuck in the same boring state all of the time. Here is how you handle an emotional roller coaster, based on your personality type.

INFJs don’t really appreciate having to endure an emotional roller coaster and would much prefer things be stable. They don’t enjoy boredom and stagnancy but feeling all over the place is overwhelming for them. INFJs want their emotions to be more in control, which is why they don’t like exposing themselves all that much to new people. INFJs would rather wait until they trust someone before opening up and taking the chance on their emotions. Having things all over the place in this way makes them feel out of sorts and often struggling to focus.

ENFJs really don’t cope with emotional roller coasters all that well, since they prefer more stability. For the ENFJ it is better to keep control over their emotions, rather than experience a roller coaster. They can become drained when this occurs, and don’t like feeling as if they have lost control on their lives or their feelings. While ENFJs care deeply about helping others, having someone push and pull on their feelings can be truly difficult for the ENFJ to handle or cope with after a while.

INFPs do their best to cope with any emotions they experience, even if these emotions tend to come in waves which aren’t predictable. INFPs are often used to feeling things on a deep level, and so sometimes they experience this type of emotional roller coaster. They do their best to handle these feelings without becoming too overwhelmed, just wanting to understand and process what is going on. While people see INFPs are emotional people, what they don’t realize is this makes them more equipped to handle emotional roller coasters because they are used to them.

ENFPs do their best to maintain an understanding of their own emotions without becoming too all over the place. They follow their feelings and want to be able to handle them as best they can. ENFPs feel things very deeply and sometimes they do experience emotions which feel like quite the roller coaster. While they might not always be capable of controlling their feelings, they have an ability to accept them and process them better than some other types might.

INTJs do their best to maintain a sense of control of their emotions and their personal lives. They don’t really enjoy dealing with drama or emotions, and would rather focus on facts and truth. When it comes to enduring an emotional roller coaster, this can be deeply exhausted for the INTJ. They really don’t equipped themselves to deal with their inner emotions and would often prefer to bury them. This can make it difficult for them to handle emotion roller coasters when they do occur.

ENTJs don’t really equipped themselves for emotional situations, since they try to bury them or ignore them. They would rather focus on practical things and uncovering cold hard facts of the situation. They don’t want to put themselves in these situations where they might feel emotional or incapable of controlling these feelings. For the ENTJ it can actually be really challenging to deal with an emotional roller coaster if it comes along, since they don’t prepare for it.

INTPs don’t really prepare themselves for any sort of emotional upset, since they try to bury their feelings most of the time. They would rather avoid diving into their emotions since they don’t fully know how to handle them. If something occurs which causes some sort of emotional roller coaster, this can be difficult for the INTP to fully cope with. They don’t equipped themselves for emotional situations and sometimes this can cause them to blow up.

ENTPs do often ignore their own emotions and focus more on facts and evidence. Because of this they might not always be prepared for emotional troubles, especially not being tossed into an emotional roller coaster. This can be something which leaves the ENTP feeling stressed and overwhelmed. They may not really know how to respond to these feelings, and can blow up a bit on people because of it.

ISTJs really don’t like having to dive into their own emotions, and so they might not be ready to handle an emotional upset. They can sometimes struggle to cope with these situations when they are forced into some sort of emotional roller coaster. Most of the time ISTJs can cope with the situation and try their best to focus on the facts. Usually they solve their issues with practical solutions and wok to avoid any sort of emotional roller coaster.

ESTJs are much more focused on being practical and don’t really believe in handling things with emotions. They try their best to bury any difficult emotions they have, not wanting it to overwhelm or control them. They would rather try to overcome these things and prefer to focus on problem solving. While they might avoid it most of the time, when these emotions boil over and send them into an emotional roller coaster it isn’t something the ESTJ handles all that well and they might be overly stressed.

ISFJs are warm and empathetic people, but they prefer to be in control of their own emotions. They can often neglect their own feelings to focus on tending to the needs of those around them. This can make it difficult for them to really deal with emotional roller coasters, since they actually try to avoid them or allowing these things to overtake them. The ISFJ might have times when they snap or have a short-fuse, mostly because they are trying to ignore these emotions.

ESFJs care about helping others and making them happy, but at the same time they don’t focus as much on their own emotions. They often try to bury their negative feelings so they can focus on tending to the needs of those around them. Because of this the ESFJ might struggle sometimes when it comes to enduring an emotional roller coaster. They try their best to be strong and overcome it, not wanting their feelings to harm anyone else. This can cause them to become a bit short-tempered and impatient though.

ISTPs don’t like dealing with emotions most of the time they prefer to focus on facts and evidence. When they are feeling frustrated or overwhelmed with certain situations, they try to find more realistic ways of dealing with it. If they have to endure some sort of emotional roller coaster it really isn’t something the ISTP appreciates dealing with.

ISFPs really try to accept their own emotions rather than neglecting them or pretending they do not exist. For the ISFP it can be draining to endure an emotional roller coaster, but they want to be able to deal with and accept it. For the ISFP it is better to feel their emotions rather than to pretend they do not exist. They will do their best to understand this up and down of emotions and cope with them however they need to.

ESTPs don’t enjoy stagnancy and so sometimes they dive into distressing situations just to see how it goes. They can get themselves into these tricky situations which might lead to a push and pull of their emotions. This is because ESFPs would rather live passionate and exciting lives, than boring and stagnant ones. They might be seen as dramatic sometimes because of this, but they do their best to focus on living their own path.