How Sarcastic Each Personality Type Can Be 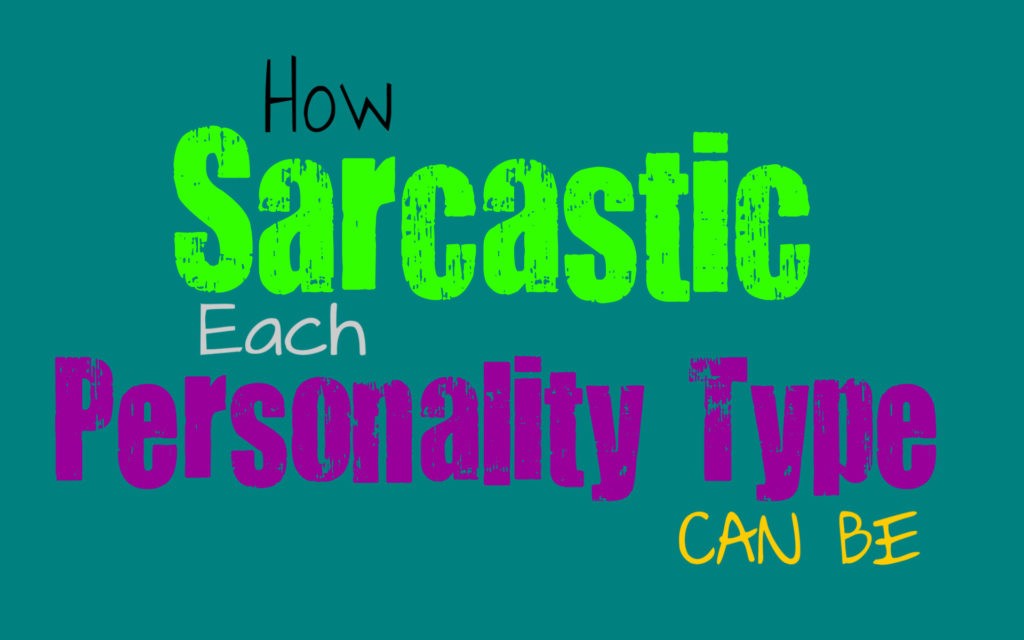 How Sarcastic Each Personality Type Can Be

Sarcasm can be a bit overwhelming for some people, but for others it is a constant form of communication. Here is how you handle sarcasm based on your personality type.

INFJs are extremely caring people and although they are compassionate and focus strongly on emotions, they are actually very witty. They enjoy researching different subjects and are very knowledgeable individuals. They do not want to be sarcastic in a way that hurts people, but they are generally very sarcastic people. INFJs are not all sunshine and rainbows, and actually do have a dark side to them. INFJs enjoy puns and any sort of comments that can utilize a much darker side to their personality. They enjoy using their words in a clever way, and often truly enjoy sarcasm.

ENFJs love to make others happy, but they do have a rather sarcastic side to their personality. They will often make sassy little remarks, especially when people are being foolish. They will often be capable of making these sarcastic comments without upsetting anyone, which is a great talent of the ENFJ. They are rather witty people, making them truly enjoy the use of wordplay. They will often take advantage of a situation where they can make a sarcastic comment or expression. They are good at getting their point across so that they don’t offend others, and can be sarcastic in a way that people understand.

INFPs can often be rather sarcastic, finding it to be a helpful way to express themselves. INFPs are sometimes cynical people, who can get caught up in the darker aspects of life. Their cynicism is often what keeps them going, helping them to express themselves and get out their emotions. INFPs are unhappy when they bottle things up for too long, and will often explode if they do this. Sarcasm can sometimes be an outlet for INFPs- a way to let out their feelings, even if those feelings are negative. They sometimes struggle with other peoples sarcasm though, and if the delivery is too dry they might become upset or misunderstand that person. They are very intelligent people but will occasionally be sensitive with individuals that they care about.

ENFPs can be extremely sarcastic people, and enjoy being playful. They often tease people as a way to show their affection, and will sometimes use sarcasm to do this. They enjoy being witty, and using wordplay to get their point across. ENFPs definitely do not shy away from sarcasm and enjoy messing with people in a lighthearted way. If someone is capable of being sarcastic and successfully teasing an ENFP, they may appear hurt at first but ultimately will enjoy that. ENFPs often love sarcasm, as long as it isn’t delivered in an overly cruel way.

Sarcasm is something that INTJs excel at, and they often truly enjoy it as a means of communication. They consider themselves realists, and sometimes this causes them to have a disdain for society as a whole. INTJs often use sarcasm as a coping mechanism, in order to deal with the constant disappointment of other people. INTJs truly dislike ignorance and unfortunately the world is filled with it. Using sarcasm can be a great way for them to express their frustrations without causing too much discord between others.

ENTJs are rather focused people, who value efficiency more than anything else. They work hard to accomplish their goals, and will push past many walls to get there. ENTJs will often push others to get things done as well, and can become frustrated when people seem to be failing. They aren’t often sarcastic, but they do have moments when they use sarcasm as a way to vent their frustrations. People can get on their nerves rather often and sometimes the best way for an ENTJ to express this, is simply by using a sarcastic comment.

INTPs are extremely intelligent and witty people, which makes them great at taking advantage of sarcasm. They are skilled at knowing their audience, and will even be good at delivering such a sarcastic line that people don’t even realize what has happened. INTPs often have a dry sense of wit, which leaves people completely baffled. They are capable of toning it down if they want others to understand them better, but they don’t always do this. Because they are so intelligent, INTPs often use sarcasm as a coping mechanism in order to deal with their sometimes frustrating surroundings.

ENTPs are often rather sarcastic individuals, especially since they enjoy different kinds of humor and wit. ENTPs are great at being sarcastic, and oftentimes make comments that go completely over peoples heads. They are often rather crude with their delivery, without much thought for how it will impact people. They simply want to entertain and often don’t realize when something might upset someone. If they see an opening for a perfect sarcastic comment, ENTPs will often take that opportunity. They enjoy putting thought into their humor, which ties into their sarcastic banter.

ISTJs appear very reserved, but are surprisingly sarcastic individuals. They often express their irritation through sarcasm, and can be rather witty people. They enjoy using sarcasm as a way to express themselves, which often makes them very funny to others. ISTJs use sarcasm as a way to be humorous, but also as a way to express their frustrations towards others. ISTJs are very smart people, who believe in doing your best at what you do, which can sometimes cause them to become frustrated by other people. Their cynicism can cause them to be very sarcastic in many situations.

ESTJs are rather upfront people, who would prefer to express their frustrations openly. They believe in efficiency which causes them to become rather irritated with people. When someone isn’t doing something correctly, ESTJs might use sarcasm as a way to express just how frustrated they are. Their sarcasm can come across as rude, since that is often their intention in a given situation. They believe in getting things done, which can cause them to have a rather short fuse. ESTJs are however very hardworking and caring individuals, they simply value efficiency.

ISFJs can become frustrated with sarcasm, especially if it is directed at them. They would prefer that people be upfront, and sometimes sarcasm can be rather hurtful. If someone is using their sarcasm as a way to avoid something, or to say something that hurts someone else, ISFJs will become very upset by this. They want to create harmony in their environment, and sometimes sarcasm can comes across as obnoxious to them. A bit of playful and light sarcasm is perfectly okay to an ISFJ, some of them even delight in the harmless side of it.

ESFJs are often products of their environments, simply because they enjoy making others happy. Many ESFJs do enjoy wit though, and might even be openly sarcastic people. They enjoy making others laugh, as much as they love being around people who can make them laugh. ESFJs will enjoy sarcasm as long as it doesn’t go too far and hurt other peoples feelings. Playful jesting is perfectly fine with them, and they can often take a joke at their own expense. When things go to far though, ESFJs will become rather upset and might be seen as sensitive in that situation.

ISTPs are very independent people, who enjoy sarcasm very much. They enjoy being able to make witty comments, and often like the fact that their dry delivery goes unnoticed by others. ISTPs often like their peace, but might become frustrated by others easily. When they get the chance to utilize sarcasm as a way to express themselves, it can be rather enjoyable for an ISTP. They are smart and witty individuals, who are rather laid-back people.

ESTPs prefer to live in the present moment, but they do enjoy wit and sarcasm. They enjoy making sarcastic comments and can be extremely fun people to be around. They have moments though of missing sarcasm if someone else’s delivery is far too dry. They prefer when someone can deliver a joke or sarcastic comment with a bit of inflection. ESTPs are often great at delivering a sarcastic response to something, and have very cynical and humorous personalities.

ISFPs may not fully enjoy sarcasm, since they prefer to be upfront and honest with things. They might even become upset if someone is being sarcastic and what they say is hurtful to those around them. ISFPs do have great senses of humor, but they might not always appreciate dry sarcasm. They aren’t completely against it, but might not be the biggest fans of constant sarcasm.

ESFPs may struggle with sarcasm from time to time, and prefer to live in the present moment. They like having fun and dislike anything that gets in the way of that. ESFPs love making other people smile, and are perfectly happy being the center of attention. They will often misunderstand someone when they are being sarcastic, and might completely miss the joke. They are smart people, but don’t always value the subtlety of sarcasm.