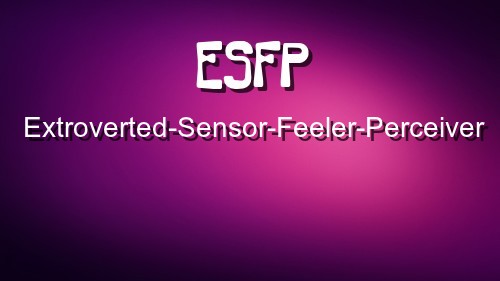 Extraverted Sensing (Se) is the main function of the ESFP. The ESFP uses this function to understand and observe the outer world. They take in the world primarily through their five senses: touch, feel, see, taste, and hear.

The ESFP is constantly scanning their environment. They can easily size up a situation and see where the strengths and weaknesses are. They live very much “in the moment” which can upset many other people that feel the ESFPs life should be more organized. The reality is, the ESFP is confident in their ability to “go with the flow” and they feel like they can get themselves out of any potential “trouble” they might get themselves in.

The ESFP also likes to “push their limits” to see just how far away they can get with something. The ESFP is a type to have the philosophy “it’s easier to say sorry, than it is to get permission.” And because of their curious nature, they are constantly apolozing for their actions. But they have enough charm to keep most people from being mad at them for very long.

The second function of the ESFP is Introverted Feeling (Fi). Introverted Feeling tends to be developed as the ESFP hits their mid-teen age. The ESFP can begin to introspect and reflect on feelings and their own personal values toward people and institutions. The ESFP can develop a strong sense of “right and wrong” that they believe is important to them. They can hold steady to believes and friendships that are close to them. The ESFP can develop loyalty and a sense of “purpose” for their life. The ESFPs nature to “do first, think later” can cause them to do things that might violate their Introverted Feeling. This can cause them to feel bad later and possibly regret some of their actions.

The ESFPs third function is Extraverted Thinking (Te). This function is developed a bit later in the ESFPs life. The ESFP can develop a desire to organize and structure their life and other people. They can start to become good at planning, and getting tasks done in a logical fashion. An ESFP might use this skill to plan parties, or to set up and organize businesses. ESFPs can also make good managers. With their natural people skills, combined with Extraverted Thinking, they can effectively delegate tasks in a way that keeps morale high.

The forth function of the ESFP is Introverted Intuition (Ni). This function never really becomes a strength of the ESFP. This function tends to manifest in a negative way for the ESFP. Introverted Intuition can appear when the ESFP is stressed out. They can start to read into problems and situations negatively. The ESFP can assume a perceived “slight” by reading too much into what somewhat said. The ESFP can also assume someone hates them and use perceived “facts” to support this intuition. The problem is, this function is very weak for the ESFP, so their assumptions are usually wrong. The ESFP can’t always realize this when they are stressed out, and have a problem with assuming they are true.