ENFJ Virtues: The Importance of Inner Morals for the ENFJ 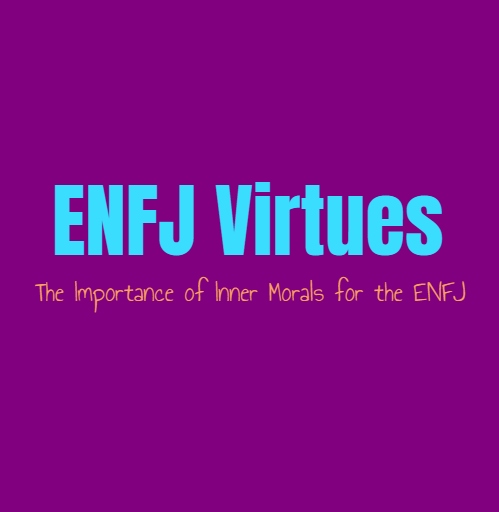 ENFJ Virtues: The Importance of Inner Morals for the ENFJ

ENFJs definitely have a strong sense of morals, ones which are very much connected to the well-being of others. ENFJs care about doing the right thing and don’t want to stray from these goals. They want to be able to consider themselves to be good, and so they want to be proud of their own actions and choices. When it comes to morals the ENFJ does focus a lot of energy on upholding their own beliefs, and they want to be able to stand firm with these values. They do spend a lot of time trying to make others happy, but this is something which the ENFJ holds as important to their own moral code as well.

What Being Virtuous Means to the ENFJ

The ENFJ sees a virtuous person as someone who also strives to do what is right, no matter what this means. Even when it is hard to do the right thing, they will fight for their beliefs and now allow the stress to overcome them. For the ENFJ a virtuous and moral person cares about others and wants to make their lives better. They search for ways to improve the world around them, rather than make things worse for people. Someone who is selfless is someone who has strong inner morals and cares about doing what they know to be right. Someone who only focuses on their own needs is not someone the ENFJ believes to be truly moral. Self-focused people really don’t fit into this category for them, and the ENFJ doesn’t have much respect for these types of people.

ENFJs believe that it is important to always try to do their best and make a positive difference in the world around them. The ENFJ feels that someone who is moral will always be trying to make the world better and help the people around them. This doesn’t just include their loved ones, but instead it includes strangers and people who are simply in need of someone to be kind and help them through whatever they are struggling with. This is often why the ENFJ focuses so much on helping others and wanting to make them happy, as this is certainly part of their own moral code of beliefs.

For the ENFJ their morals come from a combination of emotions and logic. ENFJs care about being practical with their choices and they certainly weigh these thoughts into their decision making process. While the ENFJ does want to be reasonable about their morals and beliefs, they are also focused on emotions and caring for others. Their morals aren’t just something which comes from within, since the ENFJ naturally focuses so much on those around them. They care about helping others and really want to do whatever they can to make them happy and make their lives better. Their moral code is often derived from these beliefs and this goal of helping others. ENFJs always want to consider how their actions will affect someone else, and this is a major part of where those morals comes from. For the ENFJ it is important to always strive to know the difference between right and wrong.

The ENFJs moral view is founded on the belief in helping others and trying to make their lives better. They care about helping people and really want to strive to lessen the pain of the people around them. They believe in being someone who always considers how their actions affect people and always want to do the right thing by helping. ENFJs believe that if they can help someone and stand up for them, then they should. They also believe in a sense of justice, as this is deeply important for their personal beliefs and goals. Doing what is right means standing up when no one else will and not being afraid of fighting against the expectations of the outside world. Their sense of morals causes the ENFJ to stand against injustice and makes them feel a strong need to defend people who cannot defend themselves. While they might not always make the right choices, the ENFJ believes it is important to keep trying no matter what happens.

For the ENFJ morals and being virtuous is part of who they are and the person they want to become. They know they cannot always live up to their own expectations, but they set them rather high in hopes that they can achieve those goals. They care about making a difference in the world, especially for the people around them. This is why ENFJs are happiest when they are doing something which helps people and can improve the well-being of others.