ENFP Virtues: The Importance of Inner Morals for the ENFP 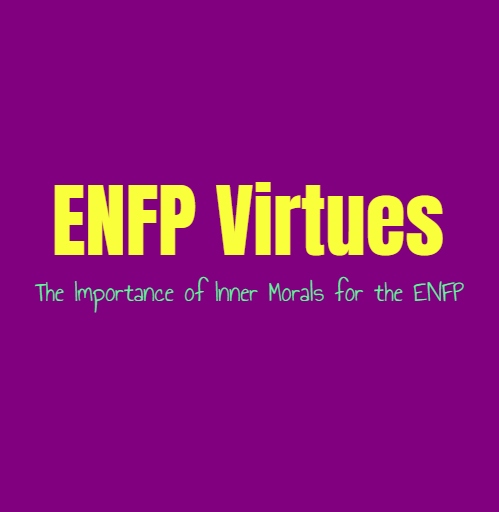 ENFP Virtues: The Importance of Inner Morals for the ENFP

ENFPs definitely have strong inner morals, which often guide them in life and help them to make the right choices. For the ENFP their sense of virtue is something deeply rooted within, and so it is rather personal for them. It takes time for the ENFP to develop these morals, since they are built over time and often make up a large part of who they are inside. They might not always see things like others do, but that doesn’t mean the ENFP doesn’t have strong values which are deeply important to them.

What Being Virtuous Means to the ENFP

For the ENFP being virtuous means being brave enough to always stand up for what they believe in. They see someone who is virtuous as being firm in their own moral code, and not allowing anything to stand in the way of this. For the ENFP this means standing up for their beliefs and following the right path, even when it can be difficult at times. They feel it is important to do what is right, even when other people are trying to force them to change their views. The ENFP often feels that someone who is truly moral will not sway or doubt themselves simply because of what other people believe or want from them. While ENFPs care about those around them, their sense of morals are something which comes from within.

For the ENFP a person who bases their own beliefs and morals off of what the rest of the world wants, is not someone who is truly virtuous. They don’t believe in bending to the will of the world, and can sometimes feel like challenging what they see around them because of this. This is why the ENFP can often challenge authority, since they don’t want to simply follow what people expect from them. Sometimes the pressure of the people around them can be frustrating for the ENFP, since they don’t want these feelings to prevent them from following what they know is right. They really do care about doing the right thing, and so they work hard to try and follow this path no matter what.

The ENFPs morals come from within, and are often deeply connected to their own internal emotions. They don’t believe in creating these morals based on the feelings and thoughts of others, as this feels disconnected for the ENFP. They care about others and this sense of caring is a big part of their moral beliefs, but they don’t make choices based on what people expect from them. The ENFP cares about people, and this is why they want to always strive to be kind and giving to other people. They certainly do believe in doing whatever they can to help others and to make a difference in the world around them. The ENFPs sense of morals are often developed over time, as they mature and grow these beliefs being stronger and more sturdy. They might go through changes in their lives, where certain inner beliefs and knowledge can be shaped and changed. This is something which can confuse some people, as they might see the ENFPs morals are less dependable because of it. The ENFP simply needs to sift through all of their internal thoughts and feelings, and sometimes they need to push boundaries in order to uncover the truth. This is why they can seem a bit scattered to others, but this is simply part of their process. They need to push the limits of others and of themselves in order to really figure out what they believe and what they stand for. Testing things out and exploring their options is an important step for the ENFP, as this helps them truly figure out who they are and what they see as right and wrong.

ENFPs have a moral view which is deeply rooted in their own inner thoughts and emotions, but this doesn’t make it less valuable. Instead the ENFP is firm in their beliefs because they are not swayed by those around them. They know what they believe in and will strive to always do what is right. ENFPs care about making a difference in the world and really want to be able to help other people. For the ENFP one of the most important things is to always do their best to help others, especially when they have the means to do so. They also have a deep desire to make a positive difference in the world around them, and this is something which often weighs heavily on their hearts until they can figure out some way of making it happen. For the ENFP being able to really find a purpose which is good and honest, is something they are often searching for throughout their lives.