Here’s How Petty You Can Be, Based on Your Personality Type 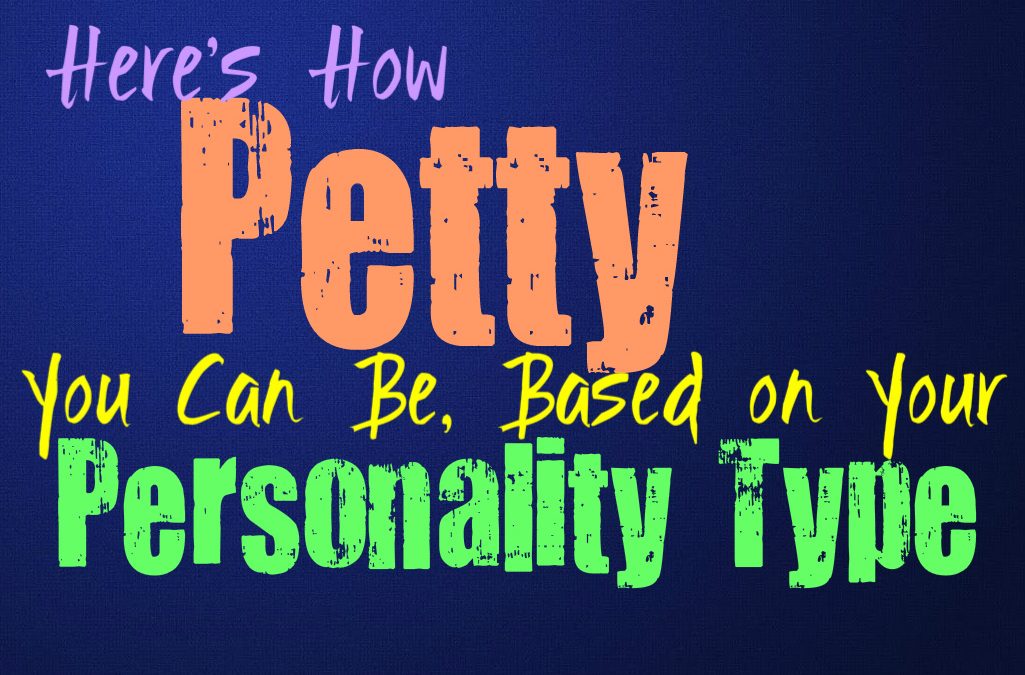 Here’s How Petty You Can Be, Based on Your Personality Type

Even the deepest and most reasonable person can have their moments of being a little bit petty. Here is how petty you can be and why, depending on your personality type.

INFJs don’t like to focus on trivial things and prefer to get to the real heart of the matter. While they are complex and deep people, they do have the potential to have petty moments. When the INFJ feels overwhelmed and exhausted by the way people behave, their own behavior can become a bit petty at times. This happens when the INFJ goes through a period of just feeling fed up with the people they encounter, and they become a bit petty with the things that bother them. Most of the time though the INFJ is thoughtful and unbelievably considerate of others. They simply have times when they weight of everything become too much to bear.

ENFJs aren’t usually seen as petty people, since they are considerate and compassionate towards others. In most situations the ENFJ focused on getting things done and simply wants to take care of their loved ones. They don’t like being petty and try to avoid behavior that seems childish or unnecessary. While the ENFJ likes to avoid being petty or being around this type of behavior, there are times when they become far too frustrated to be their usual selves. During these times when the ENFJ is pushed over the edge they can become petty and even a bit spiteful towards people who seem deserving of it.

INFPs aren’t often petty people, since they prefer to focus on the deeper meaning of things. If something is shallow or insignificant, the INFP wants no part of it. They don’t enjoy being around people who discuss petty thing or can be childish towards others. For the INFP being petty is distasteful and unappealing, and it isn’t the type of person they want to associate with. They are constantly trying to follow their strong sense of inner morals, and believe in doing what is right. The immature INFP might have moments where they get sucked into petty behavior by the people they think they can look up to, but this is something they grow out of quickly.

ENFPs aren’t petty people, but during their younger years it can seem otherwise. The young and immature ENFP is often afraid of being disliked, so they try hard to be someone that their friends approve of. If they are caught up in the wrong crowd it can cause the ENFP to behave in petty ways, and even be a bit childish towards others. In truth the ENFP possesses a depth of emotions and thoughts, and doesn’t enjoy being around people who are constantly petty. They simply need to learn to separate themselves from these people and find others who are like them.

INTJs are very focused internally and prefer to constantly be diving into information. While they are driven and intelligent people, INTJs do have their petty moments. They are complex and deep individuals, but at the same time they don’t always feel the need to be cordial with people. Where INTJs can get a bit petty is when they have to continuously interact with other people. They don’t have much patience for people they find to be a bit stupid, and have a hard time dealing with them. INTJs can handle ignorance if the person is willing and eager to learn, but someone who is willfully ignorant can spark true frustration in the INTJ. When they are around people like this their behavior can become both petty and even a bit biting.

ENTJs aren’t usually seen as petty people, since they are focused on efficiency. They don’t like becoming caught up in trivial things, and often feel like it is a waste of their time. People who are consistently immature and jabbering on about things that are meaningless, will certainly not be the types of people the ENTJ wants to be around. They are focused on growth and learning, and are always trying to build up something positive in their lives and the lives of their loved ones. While ENTJs are not often petty people, it takes someone truly irritating for them to go down a more trivial road.

INTPs aren’t often seen as petty people, simply because they dislike pointless drama. They are observers more than anything else, and prefer to pay attention to how others behave in any given situation. INTPs enjoy picking up on what is going on around them, and want to understand how to read others better. While they do become drained with drama after a while, there are some times when the INTP is drawn towards people who are a bit overdramatic. They certainly try to avoid being petty, but the immature INTP can become caught up in this sort of behavior if they become close to the wrong person.

ENTPs aren’t really interested in getting caught up in petty drama, but on the other hand they enjoy observing people. ENTPs want to dive into new things and try to experience them from every angle. For the ENTP it is important to constantly see things from each side, in order to fully learn about it. There are times when they might dive into certain behavior that is unlike them, just to understand it better and how to combat it. ENTPs aren’t naturally petty people but sometimes they can be jokingly this way when it seems amusing.

ISTJs really don’t like being around petty people, since they dislike any kind of useless drama. ISTJs are very focused on practical things and want to take care of their responsibilities. ISTJs don’t like getting caught up in childish things, and prefer to focus on what is truly important. They rarely become petty towards others, instead they want to try and be as cordial as possible. When the ISTJ dislikes someone they can certainly be passive aggressive towards them, but rarely does this reach petty levels.

While ESTJs are driven and hardworking people, they can have moments of being petty. They do prefer to focus on getting things done and dislike allowing anything to stand in their way. While ESTJs are focused people, they do value their social circles very much. They want to be a valued members of their community or their group, and find this very important. When the ESTJ encounters someone in the group that they dislike, they can certainly become a bit petty towards that person.

ISFJs are focused and responsible people, who believe in doing the right thing. They want to take care of their loved ones and always work hard to provide for them. The harmony of their environment is very important to ISFJs, which means petty behavior is something they aren’t fans of. Anything childish that might disrupt the peace in their group, is something that often bothers the ISFJ. While they do try to avoid anything petty, there are times when it comes out of them. If there is someone the ISFJ strongly disagrees with, or feels is immoral, they can certainly be petty when talking to or about that individual.

For ESFJs the most important thing is focusing on taking care of their loved ones. They want to provide for them and make them happy, and are natural people pleasers. ESFJs don’t want to do anything that can harm the peace in their environment, and often work hard to make sure everything is maintained. While ESFJs don’t like behaving in a way that could hurt someone, there are the occasional people who bring out their petty side. If they encounter someone who they strongly disagree with, or who seems to be an affront to who they are, the ESFJ can become a bit petty towards them.

ISTPs really aren’t petty people, since they prefer to focus on their own desires most of the time. ISTPs are internal people, who don’t feel the need to constantly be involved in drama. They would rather be around people who don’t frustrate them this way, and who simply want to enjoy living in the present. ISTPs are natural problem solvers, and would prefer to spend their time doing things that challenge them in a positive way.

ESTPs aren’t often seen as petty people but they have moments when it comes out. If they are frustrated with someone, or envious of what that person has- the ESTP can be a bit petty towards them. They might not even realize they are doing it, but will look to their friends for backup. ESTPs often prefer to live in the moment and want to let things like this slide, but occasionally it comes out in them. They simply become petty towards those people who seem to rub them the wrong way.

ISFPs really don’t like being petty, especially towards others. They prefer to focus on living in the moment and want to follow their hearts. While ISFPs aren’t seen as petty people, they can have moments of being this way when they are around someone they trust. If the ISFP is jealous of someone who they are in competition with, or someone who is dating someone they like- the ISFP can get a little bit petty towards them. They might not do anything that is outright rude, but behind that persons back the ISFP can be a little petty when chatting with someone they trust.

ESFPs definitely have their petty moments, simply because they are so caught up in their own emotions. They can bounce from one thing to the next so quickly that it is easy for them to become distracted. ESFPs are caring people who want to connect with their loved ones and enjoy living in the moment. While they don’t like to do anything that harms others, there are times when the ESFP can become a bit petty. If it seems like someone dislikes the ESFP or is insulting them, they can become both petty and standoffish towards that person.