What Your Creative Side Is Like Based On Your Personality Type 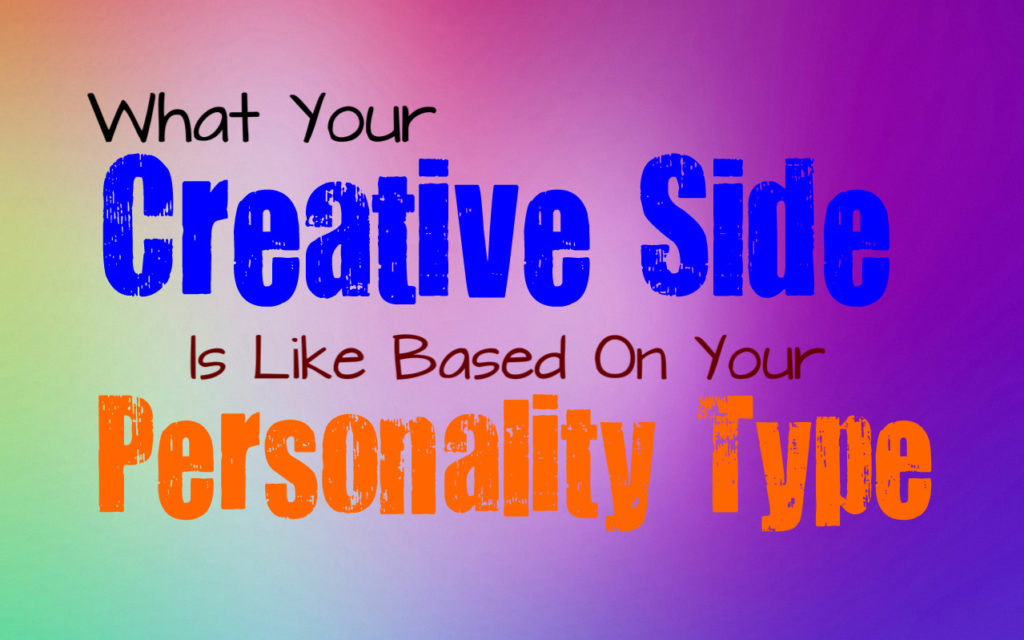 What Your Creative Side Is Like Based On Your Personality Type

Some people are naturally more creative than others, and they are great at outwardly expressing these talents. Other people have unique and less obvious ways of expressing their creativity. Here is what your creative side is like, based on your personality type.

INFJs have extremely vivid imaginations, with a magical and rich inner world. They often have a rather unique sense of creativity, and might even be artistic individuals. Their imagination is so powerful that their type of artwork or creative expression, might even seem odd to some people. INFJs are often some of the most talented people, and are prone to being writers. They are often skilled when it comes to the written word and might even enjoy expressing themselves in this way. INFJs have so much going on inside of them, that it is important for them to find creative ways to express this. They should take the time to invest in those things that fuel their passions and draw their interests.

ENFJs are very people focused, but they do have a rather rich inner world. They enjoy being around others and helping them and they often use their creativity to assist in this as well. ENFJs are great at coming up with new ideas and creative ways to enrich the lives of others. They often make great teachers and amazing parents because they are excellent at coming up with good ideas for projects and different activities. ENFJs are usually artistic people, even if it isn’t in the most conventional way. Their creative side can sometimes come out in unusual places, but it is important that they continue to fuel this side of themselves.

INFPs are often extremely creative people, with a knack for the arts. They are usually very talented individuals, and their creativity combines to make them excellent at different artistic skills. Whether they are talented writers, musicians or painters- INFPs are often very good at what they do. Many of the musicians we know today are actually INFPs. They are often capable of seeing a new way to create something, that other people just cannot visualize the way the INFP can. Their creativity is also what makes them so witty and often hilarious to the people around them. They are impressive individuals, with a rather rich creative side.

ENFPs are very enthusiastic people, who are often extremely creative. They are often rather artistic as well, and can use their creativity in this way. ENFPs usually are talented in a vast amount of skills, from artwork all the way to musical talents. They also use their creativity to come up with different stories, or even tell an existing story in a much more exciting way. ENFPs can sometimes use their creative talents to play pranks on people, or simply make a hilarious joke to keep them entertained. Their creative talents truly know no bounds, and will often take them to exciting places.

INTJs are often rather focused people, who favor logic over emotions. It is something that they don’t express to everyone, but INTJs are actually very creative people. They are often talented writers, with a skill for putting words together beautifully. It is important for INTJs to nurture their creative side, since they have rather vivid inner worlds that need to be expressed in one way or another. They are often rather skilled at coming up with incredible imagery, which stems from their incredible creative side.

ENTJs are often great at coming up with intelligent plans, but these are rather result oriented. They are definitely creative individuals, but oftentimes they are more focused on getting things done. They can often use their creative abilities in order to craft a helpful plan and move forward in the workplace. ENTJs are good at finding ways to satisfy people at work, and they utilize their creative abilities to do this. They might even have a talent for the arts, but this is something that might not be easily nurtured in them. If the ENTJ finds the time, or has people to inspire them, they can definitely find ways to dive into their creative process more often.

INTPs are often very logical people, but they have rather rich and vivid imaginations. They are constantly pondering new ideas and coming up with creative things inside of their minds. INTPs do not always outwardly express their creative side, but it is something that is always active. They often have new ideas streaming through their minds at a rapid pace, without any real way to slow it down. INTPs are creative people, but they often gear this towards logical thoughts and ideas. Some INTPs who have the chance to nurture their artistic side, are incredibly skilled in many different paths. It is important for them to allow for this creative part of themselves to blossom, in order for them to fully be themselves.

ENTPs are idea minded people, who are constantly running through thoughts and new creations inside of their minds. They love coming up with many different ideas, and trying out new things. ENTPs have rather powerful imaginations, which can sometimes get them into trouble but in most cases simply makes them talented individuals. ENTPs often use their creativity to make them wittier and more humorous individuals. They are oftentimes very skilled writers, with a knack for words. ENTPs do not always fully express their creativity, but it is rather prominent part of who they are.

ISTJs are very focused individuals, who find it important to get things done. They are goal oriented people and when they set their minds to something they are likely to accomplish it. They know what they want and will always go after it, working hard to get there. ISTJs do often have a creative side, even if they keep it a bit quiet. Whether they are talented at drawing, or even skilled writers- they simply might not make this skill known to other people. If they grow up in a household that nurtures their creativity, then ISTJs will definitely be capable of making this known to others.

ESTJs are often intelligent and forceful people, placing a strong value on efficiency. They often use their sense of creativity as a way to get important work done as best as they possibly can. ESTJs are result driven people, and will be more inclined to utilize their creative skills if they believe it will make something more efficient. Their creative side is often fueled by a desire to be more impressive, and to be a more useful individual.

ISFJs are often rather crafty people, and usually make excellent teachers. They are skilled at making things more beautiful and organized, in a way that will certainly please others. ISFJs aren’t always given the time to themselves in order to express their creative side, but when they do they are skilled at many different things. ISFJs can be surprisingly good at working with their hands, and might be the people you see frequenting the craft stores.

ESFJs will often be talented in many different things, but are rather people focused individuals. They will often bounce from one skill to the next, in order to make their loved ones happy. If they believe being good at something will impress someone they care for, ESFJs will work very hard at it. They are naturally talented individuals, who are usually capable of evolving in different situations. In many cases ESFJs creativity is focused on others, and how they can please their loved ones. When they do get time to themselves it is good for the ESFJ to be allowed to dive into something they are personally passionate about. They don’t always get this time unfortunately, but it is best for them to make time for themselves.

ISTPs are often not creative in the more traditional sense of the word. They are intelligent people, who are great at solving problems. Their creative side might not come out in an artistic way, but will often coming out when attempting to fix something. Where other people will often simply follow the rules, ISTPs will be skilled at finding a new way around the problem. They will be capable of coming up with the fastest and most efficient way to get something done. This is actually something that comes from the ISTPs sense of creativity, even if it isn’t in the more obvious sense.

ESTPs are intelligent people, who enjoy living in the present. They are often good at getting things done, and might be great problem solvers. The creative process of an ESTP is often rather quickly and in the moment. They will come up with ideas as they go, and will find way to edit them later on. ESTPs will often go with whatever feels right in the moment, as a way to get out their creative expression.

ISFPs are often rather artistic people, with creative and imaginative souls. They are capable of seeing beauty in their surroundings, and will often find ways to draw that out. ISFPs are usually talented in different types of art, such as painting, drawing or even music. Their creative side is more focused on making things more beautiful, and even whimsical.

ESFPs are surprisingly creative individuals, and often make excellent party planners because of this. They are good at seeing ways to make things more beautiful, which is a rather impressive skill. ESFPs often use their creativity to come up with amazing new ideas in order to optimize the fun in their surroundings. The reason they make great party planners is because they will often come up with new and exciting ideas, ones that most people couldn’t possibly dream up.