INTJ Teachers: How INTJs Respond to Being Teachers 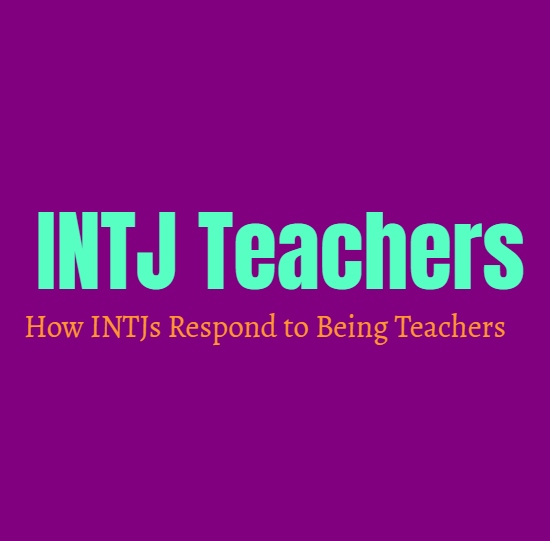 INTJ Teachers: How INTJs Respond to Being Teachers

Being a teacher can be a truly challenging but also rewarding career choice, especially for those who are passionate about it. While it can also be a thankless job at times, there are plenty of ways to feel rewarded by helping to change the lives of your students. Teachers are definitely an important part of our lives growing up and even into adulthood, and so they can truly affect how people see the world and how much they believe in themselves. The right teacher has the ability to change the lives of their students and to inspire them to go after their dreams in ways that other people cannot. Some personality types might seem more fitted to this type of job, and are likely to gain something different from the experience.

INTJs can be incredible at teaching others certain subjects, since they thirst for knowledge and want to learn to grow and expand. INTJs also enjoy being able to remove ignorance from the world in whatever ways they can, which makes teaching a positive for them in this way. Being able to help others learn and inspire them to feel that same thirst for knowledge, can be truly rewarding for the INTJ. There are certainly setbacks for them or challenges in this type of career, since they aren’t always the most patient people. For the INTJ teaching as a college professor is often ideal, since it gives them more

INTJs are passionate when it comes to learning, as well as being able to teach others. This is why they can become such inspired teachers, since they want to be able to spread information as best they can. INTJs don’t like feeling as if there is ignorance around them, and so they want to try and get rid of this wherever they can. They work hard to remove ignorance from themselves, but also seek out to remove it from the people around them. When they see that false information is being spread they want to fix this, and so this is why teaching can be useful for the INTJ. Being able to help others learn and grow is definitely fulfilling for the INTJ, and helps them feel like they have accomplished something meaningful. Being able to be someone who spreads the truth and can help others become inspired to learn is definitely something the INTJ is good at. They become very passionate about the subjects they are teaching and this is something people can sense and connect with. The INTJ might be a somewhat stern teacher at times, and they aren’t the most emotional people, but the way they become inspired by knowledge can really help others respond in the same way.

INTJs want their students to be independent and prefer to give them space to learn things in their own way. They don’t want to smother their students or force them to feel inspired by the subject matter. For the INTJ it is best to give their students room to figure out how they want to learn and if the information is really something they are excited about. They allow them to teach themselves in some ways and want to show them how to think independently. At the same time they become frustrated with students who don’t really care or want to learn. They would much rather teach people who are excited and really eager to learn about new things. INTJs don’t like forcing people or being their parental figures, instead they want to be someone who can provide information and help people see where they might have been unaware of the truth. They might even have times where they allow their students to choose how they want to learn, or how they want to apply their time.

They Are Efficient and Honest

They are also extremely efficient and know how to manage plenty of things at once. INTJs don’t like hiding things from their students or being indirect. Instead they want to be concise about what they expect and how the class is going to function. They are great at keeping things organized and efficient, which can make the class environment run very smoothly. They can plan out their lessons without becoming distracted, so what they are teaching is often rather clear. Some teachers might be all over the place and can say one thing while doing another, INTJs are highly unlikely to do this. Instead they know how to make things clear and let their students know what to expect from them. They plan things out and don’t become distracted by something new, instead they want to be sure that everything is efficient and rather focused on the subject matter.

The Struggles of the INTJ Teacher

No matter how good someone is as a teacher, there are still plenty of struggles for anyone in this career. For the INTJ one of the biggest things is patience, and having to deal with students who make poor choices. When the INTJ feels that someone just isn’t that smart or is lazy, they can become annoyed having to deal with them. INTJs aren’t always great at being patient with people when those people aren’t really showing a sincere interest in learning. This causes them to become annoyed and can be difficult for them to process this as a teacher. Anything people focused isn’t always the best for INTJs and can leave them feeling drained after a while. For them it is something they can certainly overcome, but it does pose a challenge for them.