What Do You Think About Uniformity, Based on Your Personality Type 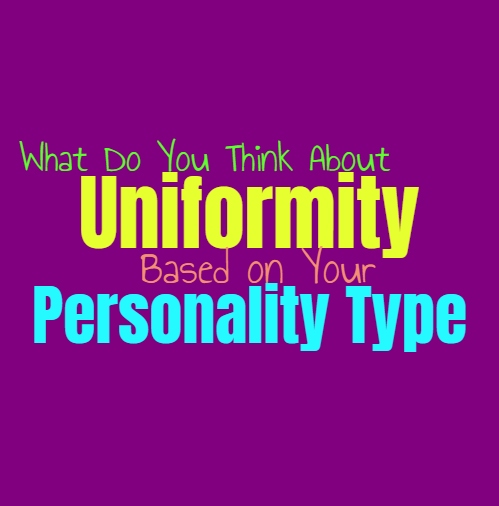 What Do You Think About Uniformity, Based on Your Personality Type

For some people a sense of uniformity can feel comforting, and this sense of organization and cohesiveness is actually exciting for them. For others anything which creates a sense of uniformity makes them feel a bit stifled, and they might prefer a bit of mess and chaos over this. Here is how you feel about uniformity, based on your personality type.

INFJs do sometimes enjoy uniformity when it comes to things they want organized and cohesive. For them it entirely depends on the situation and what they are trying to make more uniform. When uniformity is used to stifle creativity and keep people controlled, the INFJ is naturally going to rebel against this behavior. They want to people to feel free to be themselves, and to be different if that is who they are inside. For them uniformity in smaller ways can be pleasing, like having something organized neatly and having every piece of it connect in a uniform manner.

ENFJs do believe that uniformity is important in certain situations, especially when it comes to keeping things organized. When they see something which should be uniform and cohesive, and yet it is chaotic and messy, the ENFJ can become frustrated with this. They do believe that uniformity has its place and time where it holds a certain value. When they want something to be organized and cohesive, they enjoy a sense of uniformity in these circumstances. Of course, ENFJs are independent people who also believe that trying to force people to be uniform and the same, is definitely a horrible thing.

INFP
INFPs really don’t care much for uniformity, for them it can feel boring and mundane. They prefer to have things shaken up a bit and don’t mind chaos in their lives. For the INFP having to have things organized and uniform really feels a bit pointless and even a bit stifling. They want to be free to change their minds and have things in their life feel a little bit messy sometimes. For them it is more fulfilling when things are different and when everyone can feel free to change their minds and go against what is expected.

ENFPs don’t really care much for uniformity, unless it is visually stimulating. They prefer when things are a bit more chaotic, and actually challenges them a bit. For the ENFP feeling like things have to be organized and uniform, is actually going to drain them. They want to feel free to try something new and experience things on their own terms. ENFPs really enjoy being able to dive into something new and change their minds last minute without feeling obligated to some sort of schedule or organized sense of uniformity.

INTJs do enjoy uniformity in certain situations, since they like to keep things organized. When something is too chaotic it can be a bit unnerving for them, since they want to be able to maintain a sense of control. For the INTJ it is best when they can really pay attention to the details and so a sense of uniformity can be useful sometimes. They don’t feel like everything in life should be this way by any means, only the smaller things which need to be this way in order to keep them organized and cohesive.

ENTJs enjoy when things can be organized and so sometimes being uniform is a good thing. They want things to be cohesive in a way that makes sense and isn’t chaotic. For the ENTJ mess or chaos can cause things to be inefficient and this is not something they are okay with. They want to keep things cohesive and stable so that they can maintain a sense of control over what is happening around them. ENTJs don’t feel like everything in life needs to be this way, and they do support a sense of independence in people in general.

INTPs aren’t really much for uniformity, instead they like when things can be a bit chaotic. They are more focused on learning from the world around them, and their minds are often going off in different directions. Having things too uniform can feel stifling for the INTP, making them feel like they are trapped or forced into a narrow view. They want to be able to change their minds and enjoy when there is a bit of chaos around them sometimes.

ENTPs aren’t usually fans of having things uniform, since they enjoy when things are a little more chaotic and unexpected. For the ENTP having everything organized or uniform can feel stifling and boring. They want to be able to change their minds, and sometimes a little bit of chaos can be energizing for them. For the ENTP uniformity can cause them to feel trapped or like someone is trying to control them. They don’t mind when things are a tad messy or even confusing for others, since they take this as a challenge to figure out.

ISTJs do enjoy a sense of uniformity in their lives, since they like when things are organized and cohesive. For the ISTJ having chaos or things which are not uniform and don’t make sense together, is unnerving. They enjoy having things done a certain way, especially since they value efficiency. In order for things to be truly efficient they need some sort of uniformity, since this helps to bring everything together and have it make clear sense.

ESTJs do enjoy uniformity in certain things, especially when it helps to create a more efficient environment. They want things to be organized so that they can be sure they are doing everything right. ESTJs believe in being very focused on the task at hand, and they work hard to get it done better than anyone else. For the ESTJ when things are more uniform it helps to really keep track of what is going on and maintain a more cohesive and organized environment.

ISFJs do enjoy when things are uniform to some extent, especially on a smaller scale. For them having things chaotic or messy can really leave them feeling uneasy and out of control. ISFJs want to be able to maintain a sense of control in their environment, since they want to always be efficient. ISFJs put a lot of pressure on themselves to perform well, and so sometimes having things more uniform can help them feel stable and in control.

ESFJs do enjoy having some things be more uniform in life, since they want to be able to maintain a sense of control. For the ESFJ uniformity can help keep things more organized and cohesive, and this is something they do enjoy. ESFJs don’t like when everything is uniform and this can become boring, but with smaller things they want a more cohesive setting. For them this is about being able to be efficient and maintain control, so that they don’t make mistakes or get things wrong.

ISTPs aren’t really fans of uniformity, since they prefer more freedom in their lives. They would rather things be open and even a bit messy if they have to be. For the ISTP uniformity feel stifling and controlling, and is not something they often support. They want to feel like they can experience things on their own terms without everything around them having to be done in a uniform manner. ISTPs enjoy a bit of mess in their lives, especially when it excites and challenges them.

ESTPs don’t care for uniformity with most things, since they want to feel a little more freedom than this. ESTPs want to be able to experience things on their own terms, rather than needing to follow some strict organization and schedule. For the ESTP uniformity means being controlled and feeling forced to behave how someone else expects. They don’t mind when things are messy or chaotic in their personal lives, and might even prefer it this way.

ISFPs aren’t really uniform people, since they might prefer a more organized sense of chaos. FOr the ISFP it is better to be open and feel free to go things their own way. When everything needs to be uniform around them, it can leave the ISFP feeling trapped and stifled. They want to be free to be different and to change their minds without it being something that they are judged for.

ESFPs don’t really need things to be uniform, instead they enjoy being a bit different. They want things to be a little messy sometimes, since the chaos can be rewarding and exciting. ESFPs don’t want everything to be expected or scheduled in their lives, and so when things need to be uniform it can actually be a bit exhausting for them. For the ESFP it is more exciting to live their lives on their own terms, and sometimes this means a being messy and chaotic.