Are You a Self-Starter, According to Your Personality Type 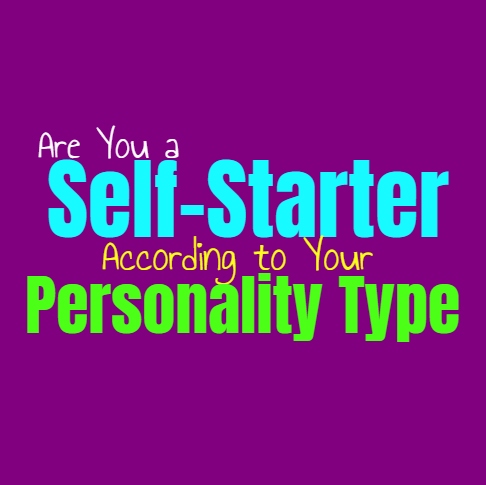 Are You a Self-Starter, According to Your Personality Type

Some people are far more inclined to motivating themselves and really taking charge without needing to be told to do so. While others might be more likely to just do what is expected of them, and so they might struggle with motivation sometimes. Here is how much of a self-started you are, based on your personality type.

INFJ
INFJs sometimes struggle to be self-starters when they are in situations which don’t inspire them. If they dislike their job or lifestyle and feel a bit trapped, then they don’t feel inclined to be self-starters. For them it requires doing something they love, something which brings out their passion and excitement for life. If the INFJ is around people they love and are doing something they truly enjoy, then they are easily self-starters who will go above and beyond the call of duty. They are often highly capable perfectionists, and so really it just depends on how inspired they are by what they are doing.

ENFJs are definitely self-starters, and want to always be ahead of things. They work hard to be someone others can look up, and can certainly be perfectionists in life. For the ENFJ it is better to motivate themselves and always be one step ahead of everyone around them. This is because they are competitive, but also because they don’t want to feel like they are failing or could be doing better. Because of this need to be somewhere close to perfect, ENFJs are easily self-starters who push to get things done.

INFP
INFPs can struggle to be self-starters, since they often lack motivation in their daily lives. If something just doesn’t inspire the INFP, they have a hard time pushing themselves to get it done. They need to find things which spark their passions in order for the INFP to be self-starters. Most of the time they will simply do the bare minimum, struggling to find the motivation to get stuff done in a timely fashion. This is because they need to feel inspired, and they need to be around people and things which bring them up.

ENFP
ENFPs are capable of being self-starters when they are excited and inspired by something. If there are chores or tasks which they really don’t want to do, the ENFP might struggle to motivate themselves. When it comes to the workplace or house tasks, they might need someone else to give them incentives or motivate them to do it. ENFPs aren’t really self-starters when it comes to these things, since they would rather be doing something which excites and inspires them most.

INTJs are absolutely self-starters who don’t really need the motivation of others to get them moving. When they set goals they work hard to go after them and even push themselves to be a few steps ahead. They don’t like just being stagnant and allowing others to beat them to the finish line with anything. For the INTJ it is natural for them to be self-starters, since they are independent people who do not rely on others to get things done for them. If they have something they need to do, the INTJ is often ready to motivate themselves forward.

ENTJs are definitely self-starters in most situations, and don’t really rely on others to motivate them. When there is something they need to get done they push themselves to move forward. They are very driven people, and are also perfectionists in everything they do. This inner desire to be efficient and accomplish their goals, makes it important for the ENTJ to be self-starters in order to create the life they desire. They don’t like sitting around waiting for things to happen, instead they work to make it happen.

INTPs are self-starters to some extent, but at the same time they can struggle when it comes to feel uninspired. They don’t really find it easy to gather motivation, especially with things they aren’t excited about. INTPs lose interest and can find themselves distracted if they are in a job which bores them, and in these positions it can be challenging for them to be self-starters. Their motivation comes from feeling challenged and inspired by something, and in these situations they are eager to take things on and keep moving forward.

ENTPs are complicated when it comes to their ability to be self-starters, since it depends on the situation. If the ENTP is excited about something and in a career where they are constantly feeling challenged, then they are certainly going to be self-starters. They will be eager to learn and ready to push themselves forward on a constant basis. If the ENTP is bored and lacking inspiring in a stagnant position, then they will struggle to care enough to be motivated.

ISTJs are definitely self-starters, since they are independent people who believe in being efficient. They don’t need others to motivate them or push them to move forward, instead they are often capable of doing this themselves. ISTJs are always trying to work hard in order to accomplish their goals, and so they need to be self-starters in order to get what they want from life. They are often capable of going above and beyond the expectations people set for them, since they want to be someone who can advance quickly.

ESTJs are definitely self-starters in life, especially with things which will help them towards their goals. They are focused people who don’t like allowing anything to stand in their way. ESTJs believe that being efficient and hardworking is truly important, and so for them being able to motivate themselves is vital. ESTJs will go above and beyond what is expected of them, without having to be asked to do so. This is because they are goal-oriented people who want to be able to make something of themselves.

ISFJs are often self-starters when it comes to their personal goals and the things they want to accomplish. They are good at motivating when their loved ones are in need and they know they should be working on something important. ISFJs aren’t necessarily self-starters in the sense that they will try to take initiative in the workplace, instead they often just work hard to accomplish what is expected of them in an impressive manner. Sometimes they can be nervous about stepping out and taking risks which might lead to failure.

ESFJ
ESFJs try to be self-starters when it comes to certain things in life, since they do want to make others proud. They are very hard working and focused on being able to please and impress their loved ones. When the ESFJ is working in a job which does not inspire them, they will simply do their best and work hard but may struggle to really be self-starters. When they find themselves excited about something which might lead to a better lifestyle, they are certainly capable of being self-starters.

ISTPs are often self-motivated when it comes to the things which inspire them, but might struggle with other things in life. If they are eager to take on the challenge then they can be self-starters in these situations. When it comes to jobs or positions which aren’t all that enjoyable for the ISTP, they can struggle to really motivate and be self-starters in these careers. They try their best to focus on the things which challenge their minds, and so for the ISTP their ability to be self-starters depends on their environment.

ESTPs aren’t always self-starters since there are times when they just lack the motivation. Their minds can often be going in different directions which can make it difficult for them to find proper motivation. For the ESTP it needs to be something which excites them or else they can become bored rather easily. When they are stagnant it becomes challenging for them to self-motivate and they often feel easily distracted in the workplace.

ISFPs can sometimes struggle with motivation and so they really aren’t known for being self-starters. This doesn’t mean they cannot be motivated about something which they are truly passionate for. ISFPs just don’t like feeling forced to progress in a career which does not inspire them and so being self-starters isn’t something which they are naturally inclined towards. ISFPs want to enjoy living in the present instead of constantly chasing after some ambitious goal.

ESFPs might struggle to be self-starters with things they really are not that excited about. When they aren’t passionate about something they have a hard time feeling inspired. ESFPs want to focus on living in the present and enjoying the things which make them feel excited. They aren’t really self-starters because they lack motivation towards things like chores and tasks which are just not fulfilling for them.