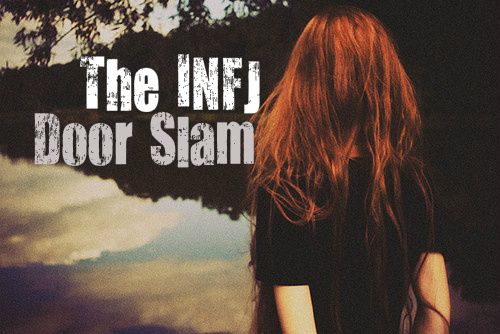 You may have heard of the notorious INFJ Door Slam. This is when the INFJ completely closes the door on someone, shutting them out of their lives for good. It seems like a fairly harsh action for such a warm and caring type. Hopefully we can bring some information about this “INFJ Door Slam” to better light.

INFJs are deeply emotional individuals, although they may not show it constantly. They care very strongly about others and feel emotions on a powerful level. When they care about someone they devote much of their lives to making them happy. INFJs rarely spend time tending to their own needs, often dedicating their lives to the needs of others. Their biggest goal is to help people and they often hope to make a real difference in the world around them. They take their connections to others very seriously, making it very hard for the INFJ to leave even a bad relationship behind. The INFJ does not “Door Slam” someone lightly, this is something that takes a lot of time before the emotion builds up much too strong for them to continue.

There are a few basic reasons why the INFJ will shut someone out of their lives completely, but it all boils down to too much abusive behavior. INFJs will often endure a lot before they are forced to “Door Slam” someone. This often happens because they care very much about people, often allowing them to push them too far. Eventually the INFJ realizes they can no longer deal with this sort of emotional abuse from someone that they love, so they must remove them from their lives. The INFJ often feels that if they do not remove this person completely, they will be too upset to actually let go of them. The INFJ doesn’t do this lightly, and the process often hurts them very much. They want to believe in people, but even the strongest individuals can only take so much pain. Eventually the INFJ becomes completely emotionally burnt out, causing them to move on from someone’s life. This often takes time after time of the INFJ being upset and emotional, trying to resolve the problem. Eventually, they see no other option but to let go of the person that is harming them.

Another reason why the INFJ will Door Slam someone, is much easier for them to come to terms with. If a person harms someone that the INFJ loves, they will become very angry. They are very protective over the people that they care for, making them capable of becoming almost dangerous towards someone who harms them. It takes much less for the INFJ to Door Slam an individual who harms their loved ones. The INFJ finds this entirely necessary and justifiable, since it is for someone that they care about. They will shut this person out with ease, often done with a very clear and rational mind. The INFJs are extremely loving, which also makes them very protective people. There really is nothing worse than hurting someone they love and they will make that clear.

Before the action of shutting someone out of their lives occurs, the INFJ goes through a very long stream of attempts to resolve the problems. They will most likely be emotional and put their best effort into fixing the issue. They do not want to cut people from their lives, especially not someone they once cared deeply for. The INFJ often takes time to come to the decision that they must move on from a relationship. They take their commitments very seriously, wanting to build strong and lifelong connections. Because of this desire the INFJ truly does not want to have to let go of their relationships.

When the INFJ finally comes to the realization that they must move on, this looks nothing like the previously emotional state they were probably in. Once the INFJ has made the decision to shut someone out, they are very level-headed and rational. This may be frightening to people who are so used to seeing the warm and gentle INFJ. They often appear very collected and even cold when they are set on slamming the door on someone. They know what they have to do, and this often takes removing all emotions from their actions. They have to shut off from this person, almost as if they are dead to them. The INFJ considers the loss of a relationship much like a death, and they have already spent time mourning this loss. At this point they are simply removing the finale memories of the lost relationship. This is no longer the mourning period, the INFJ has completely come to terms with what has happened. If the INFJ is still emotional or upset, than there is hope to resolve the relationship. Once the Door Slam has happened there is no going back. The INFJ has made the decision to move on and to them it is already done.

How To Avoid It

Simply avoid being shut out by an INFJ, by being a reasonable human being. They will take a lot from the people they love, but eventually it becomes too much. They will only cut someone out for continuous emotional abuse, or for abusing someone that they love. If you are kind to the INFJ, they will see no reason to shut you out. They understand perfectly that people make mistakes, they will even be willing to help you resolve your issues. Being honest with the INFJ and trying not to hurt them, is all you truly need to do. It takes a great deal for an INFJ to finally Door Slam someone, meaning that this action is often well-deserved. Basically do not be the world’s biggest jerk, and you won’t suffer the consequences of the INFJ Door Slam.

The INFJ does not take the action of the Door Slam lightly. If this occurs there has likely been many warning signs beforehand. INFJs are extremely caring individuals, but everyone has their limits. The INFJ simply feels that they must “take out the trash” or else this person will continue to hurt them or the people that they love. It is simply a method of protection, since the person being door slammed has clearly taken advantage of the situation. No one deserves to be treated poorly on a constant abusive basis, the INFJ is simply doing what they must to move on with their lives. The Door Slam isn’t as entirely permanent as it may seem. If down the road (a long long way down the road) the person who was shut out appears to be changing their lives and making better choices, the INFJ may consider giving them another chance. They will definitely be more cautious, building walls to prevent this person from hurting them again. They may consider being friends with this person, but they will likely never regain the closeness that they had before.

INFJs are forgiving and loving individuals, who devote a lot of themselves to caring for others. When they reach their breaking point sometimes the Door Slam is simply a necessary action for them to move on. Sometimes it is best for the INFJ to take space from someone before they actually slam the door on them. This is a way that they can more obviously show the person what will occur if they do not change their ways. It will also help the INFJ gain space before they become too bitter to keep the person in their lives. It is important to remember just how giving the INFJ truly is, making sure to care for them the way that they deserve.

The Struggles of Being An Outgoing Introvert