Here’s How You Feel About Exposing Wrongdoing, Based on Your Personality Type 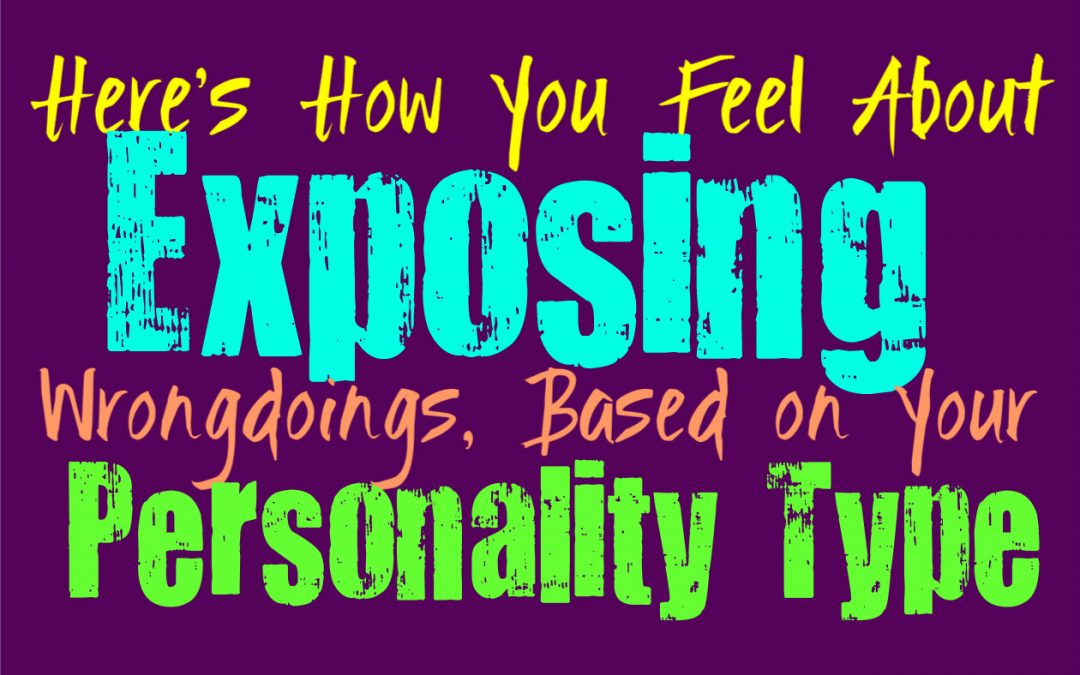 Here’s How You Feel About Exposing Wrongdoing, Based on Your Personality Type

For some people it is important to just mind their own business and try to avoid getting in the middle of things. For others it is truly important to expose the wrongdoings of others, especially when it is consistent. They believe that people who hide things and are insincere, should be exposed in front of others so that they cannot continue harming people. Here is how you feel about exposing others, based on your personality type.

INFJs often want to call people out when they are doing something truly bad, but at the same time they might struggle with actually doing this. INFJs can keep to themselves most of the time in order to avoid causing trouble or stirring things up. They aren’t afraid of standing up for the people they love, but in a social setting where they don’t feel extremely comfortable, the idea of calling someone out can be a struggle. They want to find ways to expose wrongdoings, and in some cases they might do this in a more subtle manner. Instead of directly calling someone out, the INFJ might find ways to expose the cracks in their story without making it obvious.

ENFJs can struggle with their desire to keep the peace, and their desire to expose injustice. If someone is consistently doing something harmful but has a way of keeping is secret, the ENFJ will want to expose them. They can often see through other people’s harmful actions, and will want to find a way to bring this into the light. The ENFJ may try to expose this person in a way that doesn’t make them the bad guy for doing so. They might attempt to show others how this person truly is, without being to blame for actually exposing them. If the ENFJ cannot do this in a subtle manner, then they will take whatever steps they must in order to truly out the person.

INFPs do want to expose people’s unjust actions, but they can sometimes struggle with actually doing it. They have a hard time being the one in the middle and don’t actually want to stir things up in a negative way. They might also be afraid that people won’t believe them, since they are already incapable of recognizing this person’s behavior. In this case it can be difficult for the INFP to come forward, and so they might do it in a more passive aggressive manner. If they feel someone is doing truly bad things without getting noticed for it, the INFP might subtly call out their actions in a way that exposes them but doesn’t actually make it completely obvious that the INFP intended to do this.

ENFPs don’t like seeing people who constantly do horrible things and go unnoticed for it. They might attempt to move forward and just ignore it for a while, but eventually it will boil over. The ENFP might snap one day and unload their information in a moment of frustration. They can often be quite clear with how they express themselves, especially when someone needs to be reprimanded for something. ENFPs aren’t afraid of exposing people who they feel deserve it, especially if they might harm someone else because of it.

INTJs aren’t afraid of exposing people who have behaved poorly, especially if they continue to do this. INTJs don’t intend to start drama, but at the same time they aren’t afraid of it. If the INTJ believes that someone needs to be called out for their actions, they will definitely be capable of doing so. They will assess the situation logically first, and figure out the best approach to truly expose this individual. INTJs are good at taking a step back before they act on something, which helps them find the best path. They will decide if they can out the person publicly, or if they need to take more subtle and undercover means of exposing them.

ENTJs aren’t afraid of exposing someone who has done something seriously wrong. They are upfront people who will likely express this in an aggressive and direct manner. ENTJs don’t pull any punches, and so they don’t feel trepidation over exposing someone in a public scenario. Some people might be afraid of the backlash, while most ENTJs are prepared to handle whatever comes their way. They will certainly be logical about the situation, but they aren’t afraid of stepping up and being the bad guy if they need to be. They simply don’t like allowing people to get away with doing shady things, and will want to expose their actions to others.

INTPs might hesitate when it comes to exposing someone who has done something wrong. INTPs often doubt themselves, and will analyze their thoughts and actions over and over again. Since they spend so much time going over any thought or idea, it can take time for them to come to conclusions about exposing someone. They will want to be sure that person deserves to be exposed, and will try to make sure that their emotions aren’t getting in the way. INTPs want to be logical about the situation, and approach it from a reasonable point of view. Once they believe someone is deserving of being exposed, it will often be something they need to take care of in a subtle and undercover manner.

ENTPs don’t mind exposing people who have done something wrong, especially if they believe it is deserved. ENTPs can accept small mistakes, but they dislike people who continue to do shady things but somehow get away with it. They can often see the more suspicious actions of others, and will certainly dislike seeing these people skate by without being reprimanded. They are often capable of exposing people who have done negative things, and know how to do this without upsetting anyone or seeming like the bad guy.

ISTJs don’t like having to get in the middle in most situations and would rather keep to themselves. They don’t often feel a strong need to expose others, although they can become annoyed when their actions go unnoticed. If someone is likely to hurt someone they love, then the ISTJ will decide to step in and make their actions known to others. They simply don’t like having to get into the middle of the drama, and would rather focus on their own tasks.

ESTJs don’t mind exposing people, but they don’t always feel a strong desire to. For them it is better to focus on doing what matters to them, and to move forward with their lives. If someone’s actions are likely to affect the ESTJ or their loved ones, then things change rather quickly for them. They will certainly expose someone whose negativity and behavior is going to seep into their lives. ESTJs aren’t afraid of getting involved, they simply don’t like to unless it is necessary.

ESFJs aren’t afraid of exposing someone who is doing something wrong, especially if that person continues to do so. They might have a hard time keeping it to themselves, since they dislike seeing people get away with being hurtful and toxic. ESFJs are often good at reading and understanding people, and so they might sense someone’s harmful intentions, even when others do not. This can be a challenging position for them, since it often requires waiting for that person to do something wrong, so that they can actually call them out.

ISTPs don’t like stirring things up if they don’t have to, especially if it forces them to interact too much. ISTPs will out someone if they can logically see that they deserve to be exposed. They don’t believe in involving their emotions in the situation though, and won’t simply do this because they “feel” they should. ISTPs want to be sure that someone’s behavior is well deserving of being outed, and will assess this situation before taking that next stop.

ESTPs don’t like seeing people get away with doing horrible things, but they can struggle to expose them in some instances. They want to be agreeable in the workplace and with their loved ones, and dislike feeling vulnerable when they expose someone else. They often realize when someone already has a positive foothold in a social setting, and so they will be hesitant to expose them if they believe it won’t actually do any good. While they can struggle with this for a while, the ESTP will likely let it show in more passive aggressive ways.

ISFPs don’t like witnessing injustices, but sometimes they can struggle to step forward in some situations. If someone is continuously doing something bad, yet they go unnoticed, the ISFP might be fearful of exposing them. They often realize that most people won’t see it the way they do, and so this will make them hesitate to speak up. The ISFP often needs a confidant they can trust with this information, someone who they know will stand by them no matter what. In this case they might work alongside this individual, in order to expose the deserving party.

ESFPs don’t like seeing people doing bad things and somehow they continue to get away with it. At the same time they strive to get along with people, and will do their best to continue on. ESFPs don’t like dwelling on negativity, and so sometimes their attention span can be a bit short with things like this. They will do their best to stick with people who make them happy and who they can have a good time with. ESFPs try to let go of the past and simply enjoy living in the present moment.