Here’s How You Feel About Hypocrisy, Based on Your Personality Type 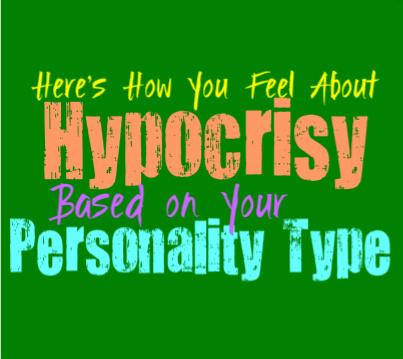 Here’s How You Feel About Hypocrisy, Based on Your Personality Type

While no one likes a hypocrite, to some this is truly one of their biggest pet peeves. Here is how you feel and respond to hypocrites, based on your personality type.

INFJs really don’t appreciate hypocrisy, since they try hard to follow the path they believe is right. At the same time they don’t like judging others for being different than themselves, they simply want them to be kind to those around them. For the INFJ it is important to give people a chance to be themselves, and at the same time this comes from a desire to not become a hypocrite themselves. They dislike when people say one thing and do something completely different. Many people who are hypocritical will judge someone else for the very thing they do, and this judgmental attitude is not something INFJs respect.

While ENFJs don’t enjoy being around hypocrites, they also aren’t fans of causing discord. They will often try to avoid being around the person who constantly says one thing and does another, instead of trying to start a fight with them. For the ENFJ it is best to live their lives focused on taking care of others, instead of putting them down. There are times when they will speak out however, when this person continues to push those around them and the ENFJ feels the need to stop it. They simply don’t like people who cannot be depended on to be sincere, and who constantly judge others for the very thing they do themselves.

For the INFP their inner morals are the most important things to them, and at times this can make them appear hypocritical to others. This doesn’t mean they truly are hypocrites, it simply means that people can’t quite understand where the INFP is coming. Their morals come from an extremely personal and private place, so those around them don’t often comprehend the depth inside of the INFP. They strive to follow a sincere path and want to do the right thing no matter what. Sometimes their morals can be confusing to those around them, especially when the INFP has a hard time being around certain people because of it. Personally INFPs dislike hypocritical behavior, and strive to live a life of honesty.

ENFPs aren’t fans of people who aren’t sincere, and will likely become really annoyed by this. At the same time they follow their own inner morals and beliefs which can be hard for others to truly understand. The ENFP can sometimes express a strong reaction to something someone else does, but have a hard time not doing it themselves. This isn’t done intentionally, since ENFPs are honest and open people. There are simply times when their emotions can cause them to respond to something with a strong reaction, when it was an easily made error.

INTJs really don’t enjoy being around hypocritical people, especially the ones who are guided by their own emotions. INTJs follow facts and evidence, instead of looking at their emotions to guide them. This helps give the INTJ a clear idea of what they believe is right and wrong, and helps them avoid being hypocritical. When someone is constantly saying one thing and doing something entirely different, the INTJ likely does not want to be around them. Not only do they find hypocrites to be annoyed, they also believe they are untrustworthy.

ENTJs really don’t appreciate hypocritical people, especially when it comes to working with them. Someone who constantly blames others and doesn’t take responsibilities for their actions, is someone the ENTJ cannot trust. A hypocrite will likely blame others for doing the very thing they do constantly, and this is someone the ENTJ does not respect at all. For them it is important to be around people who can always be trusted, and who stand by what they say.

For some hypocrites are extremely frustrated, but the INTP often approaches things differently. While they certainly don’t respect hypocritical people, INTPs don’t really trust the words of most individuals anyways. They prefer to pay closer attention to someone’s actions, than simply trust the words they say. INTPs are naturally skeptical people, which makes them avoid those who already seem untrustworthy. INTPs would much prefer to watch someone’s actions and pay close attention to what lies beyond their words and this often helps them decipher a hypocrite as well as liars.

ENTPs don’t simply believe what people say simply because they appear convincing. Because of this they often pay closer attention to their actions, which helps them look beyond their guise. They don’t respect those who are hypocrites in most situations, but sometimes the ENTP understands the desire to change one’s mind. They understand that people can be flighty and that often don’t really know what they are saying. ENTPs are more interested in paying attention to someone’s behavior in order to really read and understand them.

ISTJs really don’t respect hypocrites, and often want to avoid them. They don’t want to be around people who cannot be trusted to follow what they say they believe in. Someone who constantly says one thing yet does another, is definitely not someone the ISTJ values. They want to be around people who believe in doing what is right and will be trustworthy and loyal. ISTJs work hard to follow a clear path, and strive to follow what they express belief in.

ESTJs don’t like being around those who are hypocritical, especially when it directly affects them. They would rather just avoid trusting those individuals, and know they cannot believe their words. Once the trust of the ESTJ is broken it is truly hard for it be regained. They simply want to focus on people who are loyal and who will stand by their side no matter what. They can overlook many flaws, but ultimately loyalty is what matters most to them.

ISFJs often overlook the flaws of their loved ones, even those who are a bit hypocritical at times. They simply want to be there for the people closest to them, even if they do things that seem to frustrate the ISFJ. They work hard to care for others, and because of this they don’t want to cause discord. They want to be supportive and will try to avoid allowing things to become tense or unpleasant. While ISFJs definitely don’t like being around people they cannot trust, they are often good at reading others.

ESFJs often because extremely frustrated by hypocritical people, especially when those individuals don’t admit to their errors. They can become on edge around someone who foolishly judges others for doing the exact same things they do themselves. This type of person causes the ESFJ to see them as both untrustworthy and obnoxious. They would rather be around individuals who are open and honest, and actually enjoy this type of connection. For ESFJs it is more about being able to trust and communicate with someone openly, instead of dealing with their little inconsistencies.

ISTPs don’t really care much about how other people choose to live their lives, they simply dislike inaccuracies. If someone spreading incorrect information the ISTP is likely to point out there mistakes, and even point out their hypocrisy if that will help. For them it is more about neutralizing someone’s lies, in order to help people become properly informed. ISTPs understand that people are flaws, they just don’t want their actions affecting others or causing people to believe their inaccuracies.

ESTPs don’t appreciate hypocrisy, but more than anything they dislike people who spread misinformation. ESTPs can handle people who are inconsistent, since they themselves can jump around from time to time. Where they become truly annoyed is when someone allows this to make them spread false information. ESTPs are all about facts and evidence, and prefer to be around people who are more aware of the truth.

ISFPs definitely don’t appreciate people who cannot be trusted, but at the same time they don’t always recognize hypocrisy. ISFPs allow their emotions to be their guides and this can cause them to be inconsistent at times. They believe in doing what is right, but at the same time their inner morals can be somewhat different from others. ISFPs simply can become a bit flighty to others, because their emotions cause them to change their minds at times.

For the ESFP hypocrisy can be something they don’t easily recognize in others. They allow their emotions to be their guide and often jump around from one thing to the next. This causes the ESFP to be a bit hard to peg down, and makes it challenging for them to always follow what they say. Their emotions can cause them to do things a bit different than others expect, and this makes them less aware of their own hypocrisy at times. ESFPs are sincere people, they simply don’t stand still long enough and often change their minds.