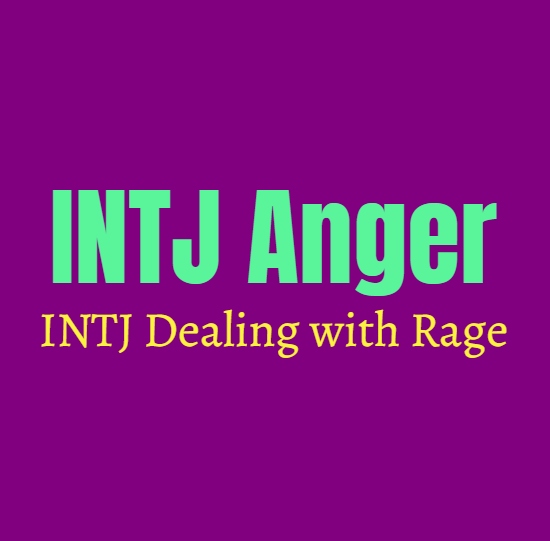 INTJs certainly experience anger, although they prefer to remain in control of their emotions as best they can. They don’t want to allow their inner feelings to dictate their choices, which can cause the INTJ to push these things aside in hopes of focusing on what is rational. At times this is easy for them to do, but other times burying these feelings causes them to seep out in other ways. The INTJ might find themselves having frustrated outbursts, without entirely realizing where this is coming from. When it comes to justified anger the INTJ is perfectly fine allowing this to be expressed, especially in situations where they feel it is necessary in order to get their point across.

One of the most frustrating things for the INTJ personality type, is dealing with ignorant or inefficient people. They understand if people are unaware of certain things, but when they are unwilling to learn or change it becomes extremely frustrating for them. They believe in growth and in always being open to learning, and when they witness people who won’t accept the truth it can certainly get them on edge. INTJs do their best to avoid being ignorant, constantly wanting to learn and do plenty of research on different subjects. When they are aware that they could be more informed, they take in as much information as they can and do their best to weigh this against their own critical thinking skills. For the INTJ people who are unwilling to learn and cure their own sense of ignorance, can be extremely frustrating. Being around people who refuse to listen to the truth and instead spew out inaccuracies, can really get the INTJ blood boiling. If these people are ignorant without spreading this information, they can often forgive this much easier. When they see people trying to spread their misinformation it can certainly cause the INTJ to become angry and even express this outwardly. They want to shut this person down and ensure that everyone witnesses just how ignorant and foolish they actually are. INTJs will use facts and details in order to call this person out, and they are very skilled at doing this in a direct and intense manner.

When it comes to inefficiency the INTJ can become frustrated as well, although they try not to let this get the best of them. The more they witness people who don’t take their job or tasks seriously, they can find themselves struggling to maintain their anger towards this person. The more they have to deal with these types of people on a daily basis, the harder it becomes for the INTJ to keep this to themselves. They value people who have a strong work ethic and who know how to be efficient in their tasks. Someone who is lazy and doesn’t try to improve, is honestly one of the most frustrating things for the INTJ.

Coping with the INTJ Rage

INTJs rarely feel guilty when they express anger or even reach points of rage. When they are angry at someone and need to express this, they often feel justified in this action. Usually this comes from dealing with people who are inefficient or who are completely ignorant, and the INTJ has little patience for these types of people. They do their best to process this without allowing themselves to snap, but there are moments when they just cannot keep it inside any longer. When the INTJ does unload on someone and express their anger, they often feel like it was a necessary choice to make. There are times when this might come out without the INTJ intending it to, and if they feel like they could have delivered it better they might feel a bit guilty over this. In most situations though, INTJs just want to move forward and feel justified in expressing the correct and accurate information towards someone who is being ignorant. Where they will feel bad or guilty, is when the INTJ expresses anger towards someone they love without intending to do so. When they are close to someone and value them, the last thing they want to do is snap at this person because of unrelated frustrations.

An important thing for the INTJ personality is to learn to process their emotions before they get out of hand. They have a tendency to bury their feelings because they want to focus on facts and rational thinking. Emotions can be a bit overwhelming for them and so they prefer things which they can tangibly and logically recognize and understand. While they are naturally logical minded people, it is still important to set some time aside for processing their emotions. In order to remain more in control of their own actions the INTJ does need to prioritize their own inner emotions from time to time. Simply sifting through and searching for ways to process those feelings in a healthy way, can help the INTJ regain control of them. They don’t need to apply too much focus on their feelings, since that would actually become draining and counterproductive for the INTJ. Simply accepting when they are upset or angry and finding a healthy way to express that anger, can help the INTJ move on and let go of whatever was bothering them in that moment.