ENFP Under Stress (Shadow Mode): The ENFPs Unhealthy Dark Side 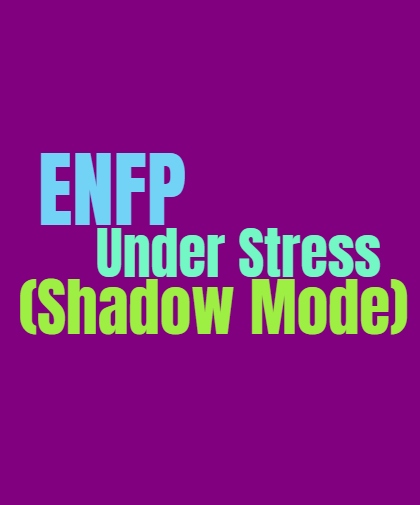 ENFP Under Stress (Shadow Mode): The ENFPs Unhealthy Dark Side

When it comes to extreme times of stress the ENFP can go into their shadow mode. This causes them to behave rather differently than their usual selves, which can be confusing for those around the ENFP. This of course, can also be confusing for the ENFP, causing them to second guess themselves and feel a bit lost when it comes to their choices. They are normally self-confident people who follow their own inner voice, but during this time when they are in their shadow it doesn’t seem like the ENFP is all that trusting in themselves or their belief system.

The dominant function of the ENFP is their Ne (extraverted intuition), this is what often makes the ENFP so creative. They use this to see patterns in the world around them, and often make various connections which most people would struggle to recognize. The ENFP can see various patterns and use this information to help them make decisions and problem solve rather well. ENFPs are often very creative people, who enjoy seeing things in different ways and use their sense of imagination to do so. They have rich inner minds filled with these various connections and ideas. ENFPs also use this to help them see the many possibilities around them, which is often why they dislike stagnancy and can become bored rather easily. The ENFP wants to experience different things, and enjoys being challenged in different ways.

The auxiliary function of the ENFP is their Fi (introverted feeling) this is where the ENFP processes their emotions and inner beliefs. This is often what causes the ENFP to have rather firm inner morals, ones which they believe in adhering to. ENFPs also develop a strong sense of self as they mature their Fi, and work to understand their own needs and desires. This helps the ENFP become more confident, knowing their own choices and what they believe is right. They care about making the right decisions and believe in always following their moral code. While ENFPs might be fun and playful people, they still care about doing what they believe is right even if people don’t always recognize this about them.

The tertiary function of the ENFP is their Te, which often aids the ENFP in remembering facts and information well. They can pick up on many different details and often catalog this information in their mind for a long time. This helps the ENFP when it comes to problem solving and makes them great at remembering little facts which they deem important. It also helps the ENFP remember certain facts which they might consider useless, but in truth this information is not useless at all. It helps them problem solve in many situations and figure out the best way to accomplish their goals.

The inferior function of the ENFP is their Si, which doesn’t present itself the same as it would for someone who uses this function dominantly. For the ENFP it can cause them to recall part details and information, but this helps them move forward rather than hold onto the past. They can also have times when they are nostalgic and enjoy reminiscing on past events, even if they don’t necessarily want to relive them. It can cause the ENFP to be more sentimental than some types, caring about their experiences they share with loved ones.

ENFP in Their Shadow

The normal dominant function of the ENFP is their Ne, which is replaced with Ni (introverted intuition). For the ENFP this function causes them to attempt to come up with future ideas based on a “feeling” they get. The ENFP can start to jump to conclusions, feeling as if they have something right not really having the information to back this up. They start to second guess their natural way of looking at the world and try and trust in some sort of sense of intuition which they don’t naturally rely on. The ENFP starts to get hunches about things, which can cause them to seem a bit paranoid to others. Constantly trying to trust in this gut feeling which doesn’t necessarily turn out to be correct most of the time.

The second function of the ENFP is normally Fi which focuses inward, but this becomes more focused on Fe (extraverted feeling). This causes the ENFP to stop relying on their inner sense of self, instead they start to turn to the group for reassurance. ENFPs are normally confident in their own beliefs and abilities, knowing what they feel and trusting in that. When they are in their shadow the ENFP starts turning to outsiders for information. They may rely on the feelings and thoughts of the group, trying to please them and searching for ways to fit into what they want. This is often a difficult time for the ENFP, since constantly searching for the approval of others is rather draining on their own spirit.

The ENFPs natural Te becomes more focused on introverted thinking or Ti. This causes the ENFP to try and search inward for these thoughts, cataloging facts and often being rather cold about it. The ENFP will start to express things in a much harsher manner, attempting to deliver these facts and pieces of information in a direct way. When this comes from the ENFP it definitely comes across as cold and much more calculated than usual. Naturally ENFPs are considerate people who don’t like hurting others, but in their shadow this might not seem to be the case. Their attempts to be factual can be overly cold and direct, causing people to be confused.

The inferior function of the ENFP normally being their Si, becomes more focused on Se (extraverted sensing). For the ENFP this can act out in more reckless ways, with them wanting to experience a thrill. They might not be as capable as following a respectful line with their loved ones, and find themselves crossing those boundaries constantly. They seek to experience the physical world but can become caught up in how to do this. ENFPs aren’t naturally in touch with more physical things, instead they are naturally imaginative people. They might start to recklessly seek out physical experiences, which can get them into trouble in these situations.

For the ENFP this either happens in times of serious stress, or in times of serious self-doubt. If their normal processes for getting things done just aren’t working, and are constantly being challenged by others, they can find themselves diving into this shadow mode. It happens when the ENFP is seeking other means of finding solutions to their problems, since they have lost faith in their own abilities for the time being. The ENFP often needs to reconnect with who they are, instead of constantly turning to others for advice and guidance. They need to relearn how to rely on themselves and this independent way of thinking which makes the ENFP so capable and imaginative.

When they are under serious duress the ENFP might go into this shadow mode, needing another way of coping with the situation. Since this stress causes their natural abilities to fail in that moment, they might need to seek other means of getting things done. This can also be a defensive response, which causes the ENFP to go into their shadow mode instead of focusing on the things which normally work for them.