INTJ Under Stress (Shadow Mode): The INTJs Unhealthy Dark Side 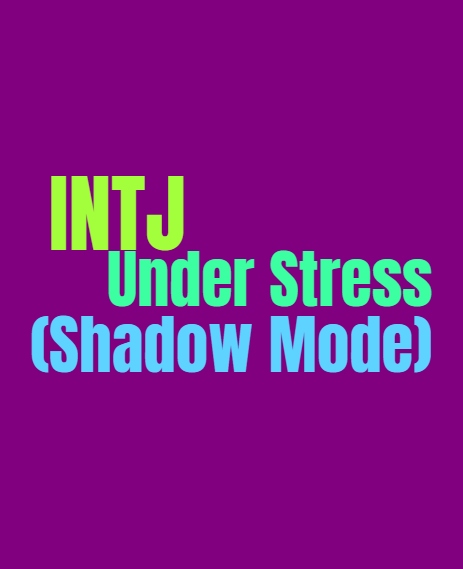 INTJ Under Stress (Shadow Mode): The INTJs Unhealthy Dark Side

When it comes to extreme stress many personality types end up going into their shadow, which can exhibit some rather unhealthy behavior as a result. For most this happens for a short time, but this serious trauma or consistent stress they might remain in this shadow mode for a long period of time. Stressful situations really make it difficult for anyone to behave at their best, and often we put up walls and defense mechanisms in order to adjust to this. For the INTJ it often requires a certain type of serious stress for them to go into their shadow mode, but when they do they behave much different than their usual selves and this can be jarring for those around them.

The dominant function for the INTJ is their Ni (introverted intuition), which helps them process information from around them in a more subconscious manner. Since INTJs are such naturally logical people, it is often easy to forget that their dominant function is actually their intuition. INTJs subconsciously catalog information, and process this through their internal intuition, as well as their external thinking processes. For the INTJ this helps them gain strong intuitive knowledge of future patterns, and helps them to predict the smartest strategic process.

The INTJs auxiliary function is their Te (extraverted thinking) function which drives them to look at facts and logic. They collect information and data and use this to come to logical conclusions and strategic plans for the future. INTJs use facts and information to help them make decisions and process their next move. They don’t want to follow emotions as a means of making choices, and would rather things which are solid and have been proven true. INTJs are also more organized people because they prefer to keep things laid out in front of them and have a clear path to follow.

The tertiary function of the INTJ is their Fi (introverted feeling) which focuses on their inner sense of morals and emotions. INTJs aren’t quite as in tune with their feelings, but they do use this as a means of understanding the things which are important to them. INTJs do have strong moral beliefs and standards, which comes from this introverted feeling function. They do believe in doing what is right, although their own idea of what is right and true is often a bit different for the INTJ than it might be for someone who has Fi as their dominant function.

The inferior function of the INTJ is their Se (extraverted feeling), which is certainly the weakest function for the INTJ. It can sometimes manifest in unusual ways, since they aren’t naturally in tune with the physical world around them. It can cause the INTJ to try and pick up on details around them, sometimes helping them recognizes changes. Most of the time though this function is hard for them to utilize the way someone who uses it as their dominant function would.

INTJs normally use Ni as their dominant function but in their shadow they focused on extraverted intuition (Ne). This often causes the INTJ to try and search for new patterns and possibilities, but finding them to be a bit too overwhelming. They begin looking outside of proven methods and facts they know, in hopes of finding things which might be more useful. Instead of trusting their normal intuitive abilities, the INTJ starts to branch out. This struggle to trust in themselves and their natural intuitive abilities, causes the INTJ to search for other means of understanding the best possible path. They find themselves looking at the different options and potential outcomes, searching and more than likely finding it difficult to peg one down. They try to use this information to really analyze and come up with proof for their ideas and beliefs. Most likely this happens because someone challenges their intuitive abilities, and so they want to come up with other means of proving themselves.

The auxiliary function of the INTJ is naturally their extraverted thinking, which becomes more focused on using Ti (introverted thinking). Naturally the INTJ prefers to move forward with things, but when they are in their shadow state they might find themselves analyzing more than usual. They prefer to look at the facts and use them logically, but in this mindset they might doubt this information. They will look at the details and want to find means of being sure of their solutions and information. They also become a bit more doubtful and challenging of other people and their information, having doubts that they can produce something factual.

When the INTJ uses Fe instead of their natural Fi, they become far more defensive of themselves and their actions. They might struggle to really take responsibility, finding outside excuses to answer their reasoning. They become more concerned with group harmony, but this can cause the INTJ to doubt themselves. The normally confident INTJ struggles to really process their own knowledge and morals, instead looking to the group harmony to make their choices on what they should do next. Often for the INTJ focusing on the needs and emotions of others is actually rather exhausting, and so in this situation they do find themselves becoming drained. They can become caught up with social rules and conventions, trying to behave in a certain manner.

The inferior function of the INTJ is naturally Se, in this case it becomes focused on Si. This tends to cause the INTJ to look at past methods and memories as negative, only seeing the bad in them and seeking to adjust these behaviors. They can become hard on themselves and others, struggling to really process the information accurately. They struggle to really focus on the past lessons which have helped them grow, and instead see the things which have negatively affected them and struggle to move forward from these situations.

This often occurs because of times of extreme stress or trauma, causing the INTJ to switch into their shadow mode. This also can occur when something happens to challenge their natural beliefs and knowledge, they find themselves struggling to trust in their normal practices. For the INTJ this can certainly send them into a confusing state of mind, but they often do their best to work through it and towards their normal selves. For the INTJ their shadow self causes them to be a bit more self-doubting, and constantly searching for more answers than they naturally would.

Most of the time INTJs are confident and self-assured people, who trust in their instincts and are very capable of getting things done. They are hardworking people with minds capable of following many different ideas and pieces of information, but in their shadow mode they do struggle a bit to really find the same balance. They appear less confident and less self-assured, constantly searching for answers outside of themselves and towards those around them.