ENTJ Sheltered: What Being Sheltered Does to the ENTJ Personality 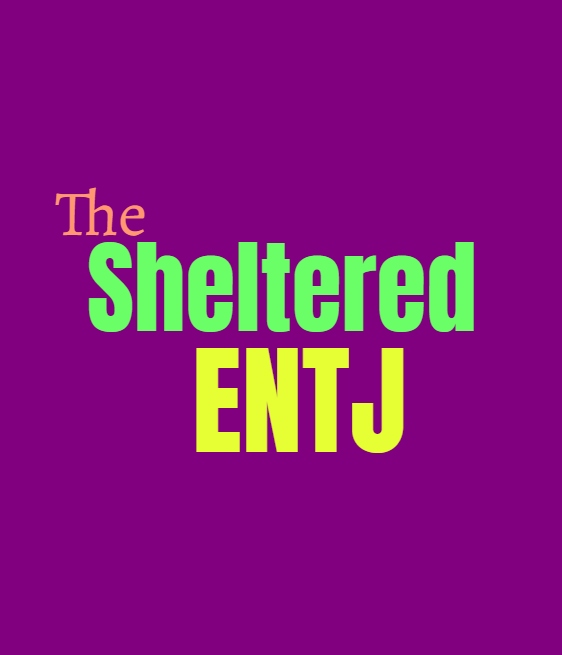 ENTJ Sheltered: What Being Sheltered Does to the ENTJ Personality

ENTJs who have been sheltered from the outside world might have a hard time ever hearing that they are wrong. While ENTJs are naturally stubborn people, the sheltered ENTJ becomes painfully stubborn. They don’t have much room for being tactful, and so they do appear rather arrogant and sometimes hard for people to be around. The sheltered ENTJ hasn’t learned to connect with people, and so they can actually be socially awkward and much more bossy. They struggle to strengthen those weaker functions, and only become focused on their extraverted thinking and introverted intuition. This gets them trapped inside of their own world, and it can be difficult for the ENTJ to overcome this as they get older.

When the ENTJ is sheltered they became so far distanced from the emotions of others, and this can cause them to be rather harsh. Most ENTJs know that it is important to learn how to be tactful so that they can express things and people will be receptive to them. While being honest and factual is most important to them, they can hold back when it is absolutely necessary. They start to learn this skill as they mature, and know how to balance honesty with being appropriate in how they express things. They have a hard time finding this middle ground and don’t really know how to hold themselves back. When they want to say something they speak outwardly, and sometimes go a bit too far with their crassness. They struggle to appreciate the emotions of others and this can make them insensitive and harsh. They focus too much on facts and logic and don’t know how to develop an appreciation for feelings and emotional needs.

The ENTJ who has been sheltered doesn’t consider all of the angles, because they are too caught up in their own internal approach to things. They try to focus hard on facts and logic, but these details can become a bit skewed. This happens because the ENTJ becomes so caught up in their own beliefs that they struggle to see what other people could offer. They can become stubborn to such a strong extent that they don’t know how to open themselves up to options. The ENTJ who has been sheltered is likely to only see their own opinions and beliefs as right, struggling to see that they could possibly be wrong. They become so focused on efficiency that they rely only on themselves, and don’t know how to take a chance on others. They become worried about the idea of working with someone else, and feel they cannot rely on people to get things right. This drive to be efficient is natural for ENTJs, but the sheltered ENTJ struggle to find this balance or grow. They don’t learn to become trusting and delegate to people who are capable of working well with them. Instead they try to handle things themselves and might struggle to accept any type of criticism. The sheltered ENTJ doesn’t know how to accept when someone disagrees with them and likely only sees them as foolish for arguing. They can be arrogant since they so strongly believe that they have all of the information correct, and aren’t open to hearing what someone else has to say.

The sheltered ENTJ can easily push people away with their arrogance, since they become so convinced that they know more than others. They also become rather caught up in their own inner worlds to the point where they struggle to step outside of this. The sheltered ENTJ often lacks perspective and can become so transfixed in a goal that this becomes all they can see or focus on. They obsess over the smallest details and want to be sure everything is perfect. This makes it hard for them to accept any type of failure. They become hard on themselves if they can’t make sure everything is perfect, and don’t really know how to properly cope with failure. Instead of finding ways to overcome the struggle and fix their mistakes, the sheltered ENTJ becomes overwhelmed and struggles to process it.

When the ENTJ reaches maturity they become capable of so much growth. They know how to navigate their skills and even develop more abilities. They learn how to better process their emotions and the emotions of those around them. They connect better with people and do their best to show support when someone they care for needs it. ENTJs can also learn how to delegate very well and can become great leaders because of this. Instead of being pushy and demanding, they help inspire people to grow and become great at what they do. They aren’t afraid of making mistakes as they grow, instead they pick themselves up and keep moving forward. They want to accomplish their goals but they are willing to learn from people. Instead of being afraid of being wrong, the mature ENTJ is open and willing to consider other angles in order to improve and become the best version of themselves.