How Do You Handle Societal Pressures, Based on Your Personality Type 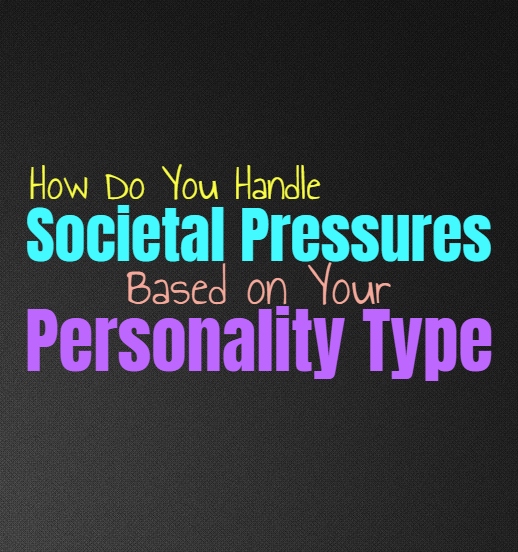 How Do You Handle Societal Pressures, Based on Your Personality Type

For some people the pressures from society can be overwhelming and they want to do their very best to fit in. For others it is merely a frustration and they don’t believe in following what society expects from then. Here is how you handle societal pressures, based on your personality type.

INFJs are often more rebellious when it comes to pressures from society, since they don’t like adhering to expectations from people who don’t even know or understand them. INFJs might find themselves following these pressures because of their family and loved ones, since they don’t want to disappoint them. INFJs usually dislike falling into these pressures and really don’t feel like they belong just blending into what other people expect from them. They deeply want to please their loved ones, but certain pressures can really be hard for them to cooperate with.

ENFJs are sometimes a bit rebellious when it comes to societal pressures, but at the same time they like to please those around them. They don’t like doing anything which might disappoint the people they love and care for. ENFJs work hard to tend to the needs of others, and so they want to be able to please and impress them. Sometimes this desire to please can make them feel obligated to follow certain societal pressures, but deep down it isn’t right for the ENFJ. They are independent people who need to make their own choices and sometimes this means going against the grain.

INFPs are not likely to follow into societal pressures, most of the time they neglect them completely. They don’t find it unnatural to try and follow what other people expect from them, especially society as a whole. INFPs don’t believe in doing something simply because everyone else is doing it, instead they often challenge these thoughts and ideas. INFPs need to think for themselves and follow their own moral beliefs and standards. For the INFP society standards are often very different than their own, which they can feel a bit odd most of the time.

ENFPs don’t like having to adhere to the pressures of society, since they want to be someone who stands on their own. They have strong inner morals and beliefs, and so for them simply doing what others expect can be challenging for them. They believe in doing what is right and often this goes against what society expects from them. ENFPs are independent and passionate people, who have very strong inner beliefs. While sometimes it can be difficult for them to go against what is expected, ENFPs are often good at being the rebel.

For the INTJ simply following what society expects from them, feels both foolish and exhausting. They have their own standards for what is right, and believe deeply in doing what is logical and smart. They don’t like being ignorant or blindly following what others do, so for them societal pressures often feel foolish. INTJs realize that there are certain standards and societal expectations in which they should go along with for more political reasons, but they are willing to go against them when it is right.

ENTJs don’t like being someone who blindly follows what society expects from them, and so they don’t like bending to societal pressures. For the ENTJ it is important to make the smart choices instead of simply doing what people expect them to do. When it comes to societal pressures ENTJs don’t fall into them easily, instead they choose to do what is right and what is the most logical action. For the ENTJ some societal pressures do seem to make sense and so they don’t mind being a bit political so people don’t misjudge them.

INTPs can have a hard time with societal pressures, especially around people who are strict and believe in adhering to these expectations. For the INTP it is difficult to follow what other people expect from them, simply they are independent people who believe in following their own path. They might actually have times where they try to adhere to these pressures, but it often feels very unnatural for the INTP and just isn’t something they can continuously cope with.

ENTPs really don’t enjoy feeling pressure from others, especially not society as a whole. The idea of having to adhere to what society expects from them, is both demeaning and exhausting. ENTPs want to follow their own path and feel free to make their own choices. For the ENTP feeling controlled is something they truly do not appreciate, and so they often find themselves rebelling against this any chance they get. For them it is best to walk their own path, one which does not simply adhere to the pressures of society.

ISTJs do sometimes find themselves adhering to certain society pressures, since they want to be considered a valuable member of society. For them it can be difficult to go against these expectations, especially if they are not morally opposed to them. Certain things the ISTJ really wants to adhere to, since they want to be someone that others respect and appreciate. They work hard and so for them being someone who is considered valuable in the community really is important.

ESTJs definitely struggle when it comes to societal pressures, since they want to be someone who is respected and considered to be a valuable member of society. They work hard to be someone that others can look up to and appreciate for their accomplishments and work ethic. For the ESTJ certain things which seem illogical or immoral, are not likely to be something they will follow or adhere to. When certain pressures don’t care them to go against their internal beliefs, then the ESTJ is likely to follow them.

ISFJs do sometimes care about the pressures and expectations of society, and so they do their best to adhere to them. They want to be someone who is appropriate and considered a respected member of the society. For the ISFJ it is truly important to be someone that others can look up to, and to always work hard to please their loved ones. They don’t want to follow societal expectations when they are immoral though, and in these cases the struggle for them can be overwhelming.

ESFJs really do care about following what is expected of them, especially for the sake of pleasing their loved ones. While they want to please those closest to them, the pressures of society often aren’t as important as people think. ESFJs truly just want to please the people they love most, and so sometimes this causes them to fall into societal pressures, if someone they love has a respect for these things. ESFJs don’t always believe in following the expectations of society, but for them the expectations of their loved ones are very important.

ISTPs don’t care much for the pressures of society, and prefer to follow their own path. They would much rather go their own way, sometimes preferring to challenge these societal expectations. ISTPs are naturally more rebellious people and so at heart they crave the chance to challenge what others expect of them. They may fall into certain pressures, if those things seem thrilling or exciting for some reason.

ESTPs do sometimes find themselves adhering to certain societal pressures, especially if everyone around them does this. They do want to be seen as someone to respect and admire, and so they want their loved ones to look up to them in some ways. Because of this desire to be liked, ESTPs do sometimes find themselves wanting to follow certain expectations, even ones they normally would challenge. ESTPs also have a rebellious nature though, especially when they are younger.

ISFPs really don’t find it natural to adhere to societal pressures, but that doesn’t mean they don’t feel their weight. For the ISFP it can be hard to challenge these expectations, since they don’t want their loved ones to judge them. At the same time ISFPs find it even more difficult to go against their inner morals and beliefs, and almost never find themselves capable of really doing this.

ESFPs do care about being someone that others like and respect, and so sometimes they can feel the weight of societal pressures. For the ESFP it can be challenging to adhere to these things, even though they find themselves wanting to be capable of this. They want to be liked and appreciated by others, but at the same time they want to be true to themselves. ESFPs often struggle to really follow the path that others expect of them, since they follow their hearts.