Here’s How You Handle Delays, Based on Your Personality Type 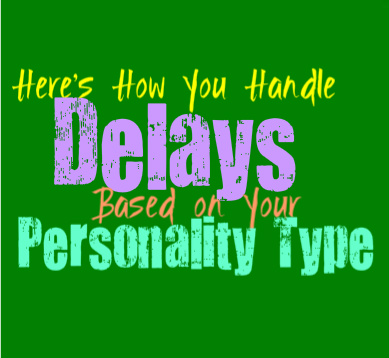 Here’s How You Handle Delays, Based on Your Personality Type

No one particularly enjoys when things are delayed or postponed, but some people handle this better than others. Whether it means a delay in a flight, a celebrating, already made plans or simply standing in line at the DMV, some people become much more frustrated by this than others. Here is how you handle delays, based on your personality type.

INFJs often become truly frustrated with delays and prefer to have things remain the way they planned. When their plans end up changing last minute it can be extremely frustrating for the INFJ. They also dislike when this occurs because someone simply doesn’t care to give a proper heads up. Having things delays can set the INFJ off since they prefer to be able to prepare for the future instead of walking into things blind. It can also be rather disappointing when they are expected something and now have to try and be patient while they wait.

ENFJs become extremely frustrated by delays, especially since they have so many things they keep juggling at once. They have so many things they are often taking care of all at once, and having to change their schedule can be rather upsetting. ENFJs try hard to take care of their loved ones, and don’t like when anything compromises that. They will often try to avoid letting this happen, but will do their best to overcome any delays that might occur.

INFPs often don’t mind a few delays, and will simply find something else to distract them. While they can become annoyed with certain disappointments, they don’t like to let this pull them down too much. INFPs prefer to focus on moving forward and don’t want to become overly negative when something does not go as planned. For them it feels normal when things change, and they might even enjoy being able to do something on their own while they wait.

While ENFPs don’t mind certain delays, things like waiting in line often frustrates them immensely. They can become anxious or annoyed when they have to remain in one place while they wait. ENFPs don’t mind delays when they have the time and opportunity to distract themselves while they wait. They simply don’t like being stuck in the same place without the change to find some way to entertain themselves and keep busy in some ways.

INTJs really dislike delays of any kind, since they prefer to keep things dependable. When something continues to change due to inefficiency or errors, this can be very annoying for the INTJ. This is why they often prefer to handle things themselves, but sometimes they have to rely on others and they definitely don’t enjoy it. INTJs believe in keeping their plans and commitments, and when something is delayed it often means they have to adjust or find some way to keep things in order.

ENTJs definitely don’t appreciate delays, and can actually become rather annoyed by them. They value efficiency and oftentimes when there is a delay or a long wait, it is because people aren’t quite taking care of their jobs properly. ENTJs can become annoyed by this, since they can often see ways that things could be taken care of much better. They want to keep things in order and often have many things they need to get done. Delays can leave them feeling frustrated, but they will certainly find a way to adapt.

INTPs don’t mind the occasional delay, they simply try to adapt to the situation. They are not afraid of changes, and often enjoy being able to take on the challenge. INTPs realize that life cannot always be planned or schedules, and sometimes they delay things themselves. They aren’t always great at keeping track of time and a strict schedule, INTPs prefer to be able to feel free to change their minds if they please.

ENTPs don’t mind having a delay here and there, as long as they don’t have to wait and stand still because of it. When something is delayed they often adapt and find something else to distract them. When the ENTP is stuck in the same place for too long or has to wait in a long line, this can cause them to lose their patience a bit. They can handle delays that give them the room and space to keep busy though, since they don’t mind having to adapt to changes.

ISTJs definitely dislike delays and can actually become immensely frustrated by them. They prefer to maintain a schedule and dislike when people cannot be efficient enough to keep things on a together. When a mistake or error causes a delay for the ISTJ, they definitely become annoyed by this. They will certainly try to find a way to move forward, but they prefer when things are done properly.

ESTJs definitely don’t appreciate having to deal with delays, and often prefer when things remain scheduled. They value efficiency and become truly annoyed when people cannot handle their jobs and this causes delays of some sort. For the ESTJ standing still and having to wait can be truly annoyed, they prefer to constantly be focusing on moving forward and getting things done.

ISFJs don’t enjoy having things changed on them, so delays can be rather annoying. They prefer to maintain a sense of commitment to their actions, and so they become annoyed when this changes. ISFJs are constantly trying to care for their loved ones, and believe it is important to do everything they can to maintain a sense of peace. When they experience delays it can often hold them up and leave them feeling a bit uneasy.

ESFJs often become extremely annoyed when they experience unexpected delays. They like to keep things organized and prefer to be able to predict what is coming next. They focus on taking care of their loved ones and delays can often get in the way of this. For the ESFJ making sure the people around them are happy is often their number one priority. They don’t enjoy delays or being forced to wait for long, since they prefer to keep busy.

ISTPs don’t mind the occasional delays, since they don’t need to live constantly by a schedule. ISTPs live in the present and want their lives to be filled with adventure and new experiences. They don’t want to feel constantly held back by a schedule, so the ISTP will definitely be able to adapt to delays or changes. ISTPs don’t like delays when they have to remain stagnant for too long or wait in line though, and will become annoyed by this.

ESTPs don’t mind the occasional delay, but they become frustrated when it holds them back. They enjoy having special days remembered, and don’t like when their exciting plans are cancelled. ESTPs prefer to live in the moment though and will try to make the most of whatever happens. For them delays can be annoying, but if they can find something to distract them it is fine.

ISFPs often try to overcome delays and don’t want to let these things pull them down. They believe in remaining positive and will often try to look on the bright side of things. ISFPs don’t mind when things change and simply prefer to live in the present. If they experience some sort of delay they will simply try to find something else to entertain or distract them while they wait.

ESFPs don’t like delays, especially when they hold them back in some way. They don’t mind when plans change but if it prevents them from experiencing something then it will certainly be annoying for them. The ESFP will often attempt to adapt and overcome the delays, and will want to find something to compensate for their lost time. They will likely jump into something new in order to distract them and entertain them.