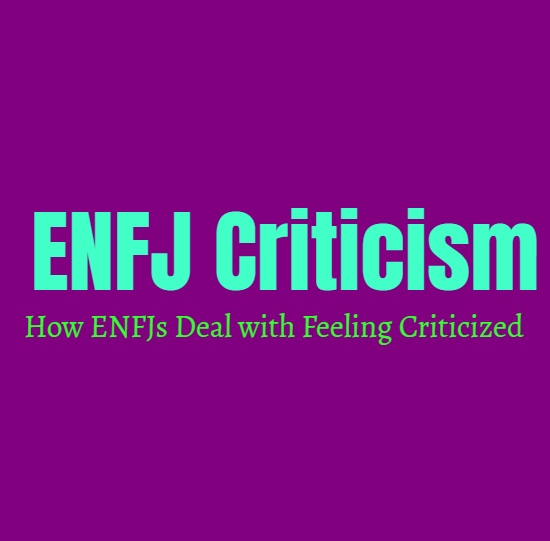 ENFJs don’t really cope well with criticism, since they already put a lot on themselves. They can be perfectionists and want to be sure that they do everything to the best of their ability. When someone shoots criticism at them it can be hurtful and hard to handle, even if they know it isn’t intended to be cruel. ENFJs might struggle with even constructive criticism, especially when it comes from someone they love and care for. They can often cope with this much better from outsiders or from a work environment, since they can process this as something they can improve upon rather than an imperfection their loved ones can see. ENFJs just have a hard time not living up to expectations and they try hard to fit into so many different roles.

ENFJs can certainly struggle when it comes to handling criticism, even in situations where it is meant to be helpful. For them it often depends on who is giving them this criticism, and how it is being delivered. In work settings the ENFJ can often handle criticism more effectively, since they realize they need to live up to certain expectations and standards. They can still take this harshly though, and feel like they have failed in some way if they are criticized. They simply try their best to process this by working harder and ensuring that they live up to certain standards. When it comes to strangers giving them criticism the ENFJ can often handle this better as well, and finds themselves trying to understand where the other person is coming from.

Where ENFJs might not process criticism very well, is when it comes from someone they love or care for. They often have a close inner circle of people they trust and consider truly important, and those people mean so much to the ENFJ. They invest all of their time and energy into making those special people happy, and so criticism from them becomes truly hurtful and can be hard for them to actually handle without becoming defensive.

ENFJs struggle with criticism because they put a lot of pressure on themselves to be perfect for everyone around them. ENFJs work hard to be everything to everyone, which can be a challenge and can wear on them after a while. They strive to be the best they can be for everyone and so criticism can actually hit them rather hard. When they receive criticism from someone they love it is even more challenging, since the ENFJ can take this personally. They might start to see it as that person not seeing the best in them, and it can make them feel insecure. ENFJs really care about how their loved ones view them, and they strive to be perfect for those people. Criticism makes them feel as if they have failed, or like they should have done better. They also spend a lot of time analyzing their mistakes and so they likely see the things that could have been done better. ENFJs can go beyond that even, and see themselves as flawed or messing up when what they have accomplished is actually impressive.

ENFJs just take so much on themselves and are often their own worst critic. They see all of their own mistakes and really don’t like feeling as if they have failed those around them. When they care about someone it becomes difficult for them to take any sort of criticism, even if it is something light or intended to be helpful. The ENFJ might take this wrong and see it as they could have done better and that someone they care for is disappointed in them and their actions. Being someone who gives so much to those around them can certainly cause the ENFJ to become sensitive to what people say or do. They try so hard to always be there for others, and so any sort of criticism can feel as if they aren’t being appreciated for how hard they work and push.

The important thing for ENFJs who struggle with criticism is to actually take time for themselves. They spend so much time giving to others and can sometimes base their own self-confidence on how others view them. It is vital that they take time to really figure out who they are and what they value most inside. The more confident they become in themselves and the better they get at setting boundaries, the better the ENFJ gets at dealing with criticism. This is certainly a process, since ENFJs naturally want to help those around them to the point of ehxuastion. They need to learn how to appreciate and love themselves without having to rely on those around them for validation. The more mature ENFJ will start to learn how to set these boundaries, and spend more time with themselves and their own inner feelings and desires. Once this happens they become more at ease with being imperfect and realize that they can make changes or adjustments without it being horrible. They don’t always have to live up to these unreasonable expectations of perfection, since no one can ever fit into that idea. They certainly push hard to be there for others and this is part of who they are, but that doesn’t mean they need to allow criticism to knock them down or forget how much they truly have to offer.