Here’s How You Feel About Internet Trolling, Based on Your Personality Type 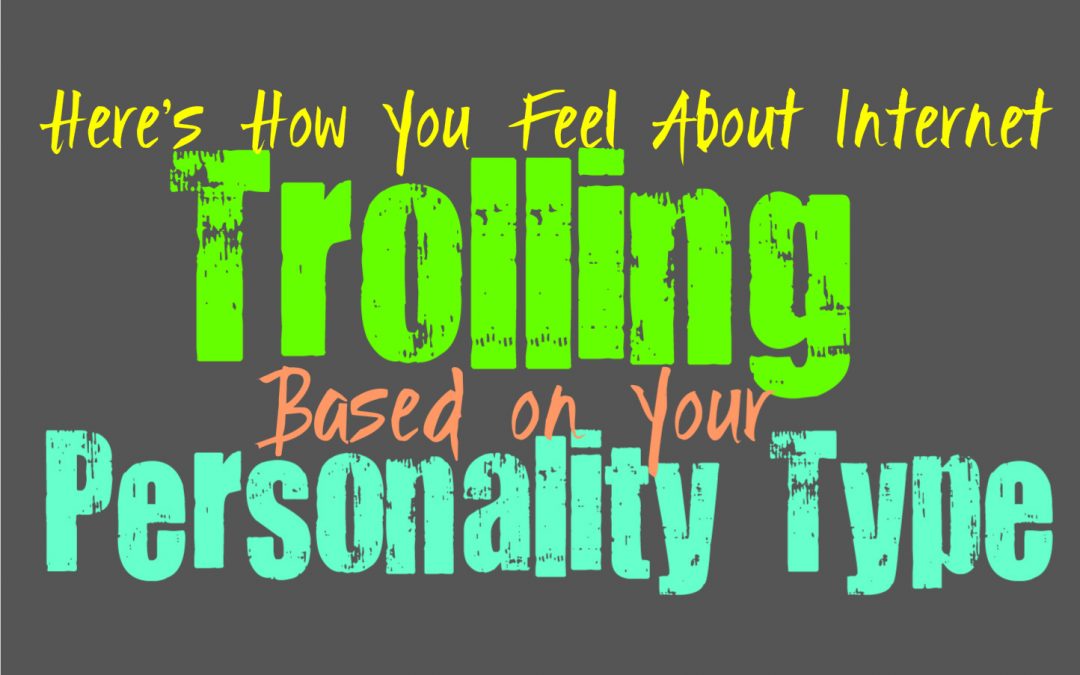 Here’s How You Feel About Internet Trolling, Based on Your Personality Type

While some people might find a bit of trolling amusing, others see it as obnoxious or even harmful. Here is how you feel about internet trolling, based on your personality type.

INFJs usually find internet trolling to be a bit obnoxious and pointless. They can become annoyed with people who feel like they are superior to others and can manipulate them in this way. INFJs are often very capable of being trolls if they want to be, since they are intelligent and can easily understand others. For them it often feels like a cruel way to deceive others, and they can recognize it rather easily. Most of the time the INFJ will want to uncover these trolls so that others are aware, but sometimes they will simply troll them back and beat them at their own game.

ENFJs aren’t usually interested in being around people who troll others, and often find this obnoxious. For the ENFJ it is better to be upfront and be themselves, they become truly frustrated with those who want to manipulate and control others. ENFJs often feel the need to defend people who are being abused or manipulated, so they might want to uncover the people who troll those around them. Most ENFJs aren’t fans of trolling, and will either want to ignore these people completely, or make sure that everyone is aware of who they are.

INFPs don’t usually appreciate internet trolls and might find them to be upsetting. For them it is more important to be honest and upfront, instead of trying to deceive others. For the INFP playful trolling isn’t a big deal though, like simply pretending something small in order to amuse others. Where they become upset is when someone is trolling others in order to frustrate them or make them feel stupid. INFPs dislike people who do things like this and will likely want to uncover them and their manipulative ways. INFPs have great senses of humor and enjoy being playful, they just don’t want this to be harmful to others.

ENFPs are very playful people who enjoy being able to cook up little tricks or pranks. For the trolling can be innocent, and simply a way to joke around with others. They will eventually admit to their scheme, and come clean about what they were trolling for. ENFPs don’t appreciate people who troll others to make them look stupid or to upset them, and will likely want to troll that person back. They want to beat these people at their own game so that they can manipulate and frustrate them even more than that person does to others.

INTJs can have different sides to their personalities, which makes them more difficult than other types to peg down. While some INTJs might be morally against the idea of trolling, others might use it as a means of entertainment. The more mature INTJ will become truly irritated with people who feel the need to troll others, and will likely work to shut that person down and embarrass them and their foolishness. While other INTJs might find it entertaining to see just how convincing they can be in their trolling efforts, using this as a way to understand the gullibility of others.

ENTJs usually don’t feel like they have time for things like trolling, but might occasionally participate in it. If the ENTJ is bored and wants to figure out how people will respond, they might see how well they can troll them They likely will admit to their actions afterwards though, and dislike taking anything like this to the point of completely dishonesty. ENTJs believe in providing people with accurate information, which is why they likely only want to troll so much. For them people who consistently troll and pretend to be something they are not, is actually rather annoying.

While INTPs might become frustrated with certain kinds of trolling, they also might get sucked into it at times. The younger INTP will likely find it entertaining to see how far they can take things, and to see if they can troll others effectively. They don’t do this in a malicious manner, they simply like to see how gullible people can be. They also put up a lot of walls and oftentimes being an internet troll is just another wall to build around themselves. INTPs will likely become annoyed with people who are cruel in their trolling habits though, and will want to uncover those people in front of others.

ENTPs can definitely have a troll side to them, since they like pushing boundaries. The ENTP will often troll others just to see how they respond and just how far they can take it. It can be truly entertaining for them to read others and see how convincing they can be with their trolling techniques. For the ENTP it is about seeing how far they can push the limits, and sometimes they can take it a bit too far. For them it is more about learning and understanding how people will respond, since ENTPs are often interested in different social experiments. And sometimes it is just entertaining to see what they can come up with and how far they can take things.

ISTJs don’t usually have the patience for being an internet troll, and are more interested in the real world around them. There are some ISTJs who might enjoy this as a source of entertainment though, especially to see how people will respond. Most ISTJs will find it exhausted when people constantly troll others, and prefer when people are upfront and honest about who they are. While it might be entertaining at first, this type of behavior usually becomes draining to them after a while.

ESTJs might have times when being an internet troll seems slightly amusing for them. They enjoy seeing how far they can take things, and can be a bit over the top sometimes. ESTJs do prefer to focus on the real world around them though, and would much rather be getting things done. If they have some downtime they are more likely to get into debates on the internet than they are to troll someone. The ESTJ is often a sincere person, who doesn’t like to pretend or hide who they are and what they believe.

ISFJs definitely don’t enjoy trolling and often feel like it is obnoxious and immature. People who feel the need to deceive others seems a bit pointless and even cruel to the ISFJ. They would rather people who upfront and honest, instead of constantly pretending for the sake of entertainment. This is a reason why many ISFJs can become frustrated with the internet, simply because they don’t want to deal with trolls and people who constantly want to argue.

ESFJs usually dislike internet trolls quite a bit, and will become frustrated by them. They would rather people be sincere and upfront about who they are and what they believe in. When someone is constantly trying to manipulate others through trolling the ESFJ might see this as truly immature. ESFJs don’t like when people do anything to harm others, and oftentimes they feel like trolling is hurtful. They also dislike when others act superior, and to them trolling is exactly that.

There are times when the ISTP might find a small amount of trolling to be entertaining, but only if it is done in a harmless manner. They prefer to use the internet to learn and also to inform others of facts. They dislike when people constantly spread misinformation, and would rather swoop in and correct them where they can. ISTPs can become annoyed with people who seek to constantly troll and manipulate others, but they are often good at uncovering them.

ESTPs who are more immature might enjoy trolling, simply as a way to entertain themselves. Seeing how far they can take things and how much they can push people. While some might enjoy this, most ESTPs are much more interested in debating online and finding people who they can inform and possibly learn from in some ways. ESTPs simply enjoy being able to learn and to teach others, since they are focused on facts and evidence.

ISFPs usually dislike internet trolls and even find them to be upsetting. They would rather be around people who are kind and considerate of others. When people constantly feel the need to troll others, the ISFP often feels like this is manipulative and mean. They dislike this type of behavior, and would rather focus on enjoying the present moment as much as they can.

ESFPs are very focused on living in the present, and because of this they rarely care about internet trolling. They might even be a bit gullible at times and not recognize when someone is being a troll. For ESFPs this type of behavior is obnoxious and even a bit cruel when they are deceiving others. ESFPs are more interested in living their lives in the moment and having fun, rather than constantly seeking to confuse others.