Are You Good at Creating a Build Up, Based on Your Personality Type 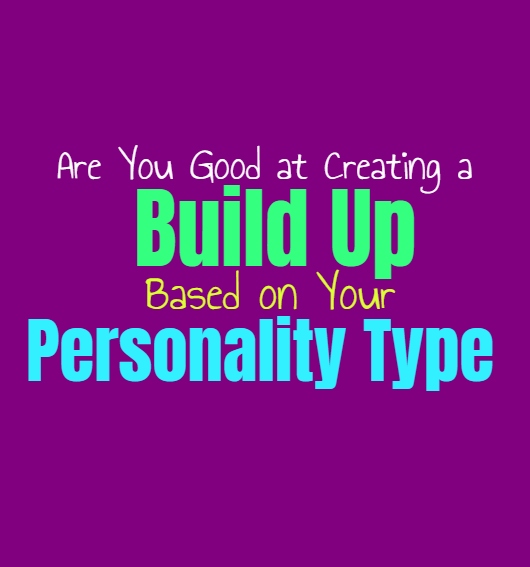 Are You Good at Creating a Build Up, Based on Your Personality Type

Some people are naturally good at creating a build up of intensity, especially when they want to lead up to something exciting. These people know how to generate some sort of hype by really building up to things. For others this can seem a bit draining and so they don’t really expend their energy trying to lead up to something, instead they simply introduce it as it. Here is how good at creating a build up you are, based on your personality type.

INFJs do sometimes create a build up when they are telling a story or expressing something exciting. They can certainly be capable of this type of drama and theatrics, especially when it is a positive thing. They enjoy being able to create this build up towards some some of happy news or exciting story. INFJs are certainly capable of this, but they don’t like doing it all of the time. There are many instances when they would rather not expend their energy trying to build up to something, and would rather just deliver the information directly.

ENFJs are often great at creating a build up, especially towards something exciting and rewarding. They enjoy creating this build up and want to make the story or news sound even more intense and thrilling for everyone involved. ENFJs can certainly be drawn to drama and theatrics, especially when it is done in a positive manner. They like being able to deliver this happy information to those around them, and so sometimes building up to it can prolong the moment and make the story even better.

While INFPs do keep to themselves a lot, they are surprisingly capable of creating drama and build up. INFPs can be theatrically inclined people, who enjoy artistic expressions of many kinds. Sometimes this draws the INFP towards the opportunity to create a sense of build up and excitement towards something. They might enjoy telling stories and being able create this build up of intensity so that others can really get involved and excitement about what is to come.

ENFPs are definitely good at creating a build up, but they might have a hard time holding onto it for too long. They might become a bit too excited themselves and want to express the punchline without being able to hold out. They will do their best to create this build up though, since they enjoy creating this drama and want to make things exciting for everyone involved. ENFPs enjoy storytelling and they enjoy being able to bring a sense of joy and intensity around them.

INTJs are capable of creating a build up if it seems necessary in order to get their point across. Most of the time though, INTJs prefer to be direct and to the point when it comes to expressing information. INTJs believe in spreading the truth and they prefer being direct as a means of ensuring that everything is delivered precisely and accurately. INTJs don’t want to mess around and build up to something when it is entirely necessary that they get to the point quickly.

ENTJs are capable of creating drama and can certainly build up to a punchline if it is helpful. They simply don’t like building up to things when it is the smartest choice to deliver the information in a more direct manner. ENTJs don’t like wasting time since they value efficiency more than most things, and so building up can be a bit foolish to them. There are certainly instances when they are telling an exciting story and want to build up to something, and ENTJs can be great at this. For them it just depends on the situation and whether or not a build up is necessary.

INTPs are capable of creating drama and building up to something often more than people realize. They can certainly have a more dramatic side to them, they just don’t let this out most of the time. When the INTP realizes that telling a story does require a dramatic build up, they are very capable of creating this. They simply don’t like doing this all of the time, since many instances require expressing the truth in a more direct manner.

ENTPs are sometimes dramatically inclined people, who do enjoy creating intensity. They want to be able to build up to something, especially when there is some sort of punchline or exciting finishing lines. ENTPs know when it is time to deliver the facts without creating a build up, instead they will be precise and to the point when it is needed. But that doesn’t mean they don’t enjoy building up to things and making the situation more intense when they can.

ISTJs don’t really like having to build up to something since they are more direct and to the point. They believe in getting things done and don’t like holding themselves back by trying to prolong things. ISTJs are not incapable of building up to things when they are telling a story, but they don’t like doing this in instances when they really should be getting to the point of things. They want to be capable of being direct so that they can ensure the job can get done.

ESTJs are capable of a build up, especially when they are telling some sort of story which requires this. When they are telling stories about their past or certain thrilling things which they think will entertain people, then they can certainly create a build up. When it comes to getting things done and focusing on getting their point across, the ESTJ does not like to create a build up since this seems inefficient and unnecessary.

ISFJs don’t really like having to build up to something when they should be focusing on getting to the point. They want to ensure a certain level of efficiency, mostly because they have so many things resting on their shoulders. They care about being able to make others happy and want to be able to get to the point in order to do so. When it comes to telling stories though, the ISFJ might be capable of building up to things if they think this type of drama is what others want and need.

ESFJs might not be great at building up to things when they are overly excited, and just want to express this to their loved ones. At the same time they learn from their environments and want to be able to take care of their loved ones and make them happy. ESFJs will do whatever they can to please others and sometimes a build up helps their good news sound even more exciting.

ISTPs are often good at creating drama if they want to, but they do sometimes prefer to get to the point. They live in the moment and experience things at their own pace, sometimes this means creating a build up for the effect of drama. ISTPs do like to make things a bit more exciting, especially when they are feeling stagnant or bored. When they are feeling a bit bored of the situation they might try to build up to something and create more intensity.

ESTPs are certainly capable of building up to things, especially when they want to create some more intensity. They care about making things a bit more thrilling and really dislike stagnancy or boredom. When the ESTP is feeling a bit stuck they might want to create some sort of build up so that the end result is more intense and thrilling for everyone involved. They do enjoy getting to the point with some information though, especially when they are trying to spread the facts.

ISFPs don’t mind creating a build up when it can make the end result or punchline a bit more thrilling. ISFPs do know how to build up to things especially when they want to make the situation more entertaining for everyone involved. They do enjoy a bit of drama in their lives, as long as it is done in a positive manner. Sometimes though the ISFP just doesn’t feel up for creating this build up, since they want to get to the end of the story in order to connect with someone.

ESFPs are great at creating drama and enjoy being able to build up to the the punchline. They enjoy making things a bit more exciting, especially if they are trying to tell a story. ESFPs are passionate people and they enjoy making things more entertaining for everyone involved. Sometimes creating a build up is the best way to create this type of drama and excitement and so they enjoy doing this.