Can You Bite Your Tongue When Necessary, Based on Your Personality Type 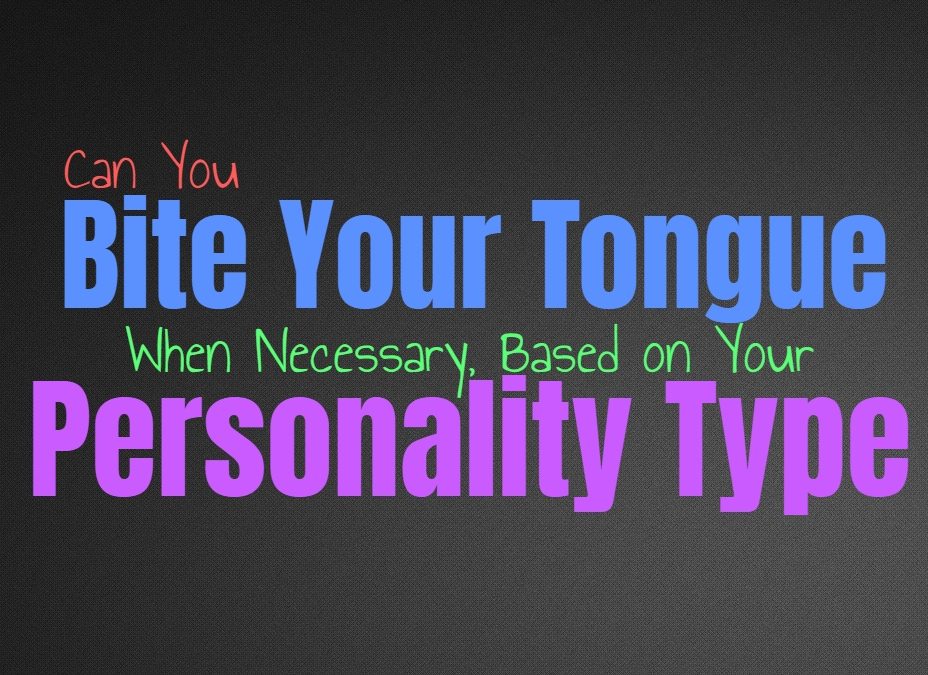 Can You Bite Your Tongue When Necessary, Based on Your Personality Type

Some people find it difficult to bite their tongue even in situations where it would be the most prudent choice. For others it is easy to keep quiet, and almost more natural than speaking up about something unnecessary. Here is how good you are at biting your tongue, based on your personality type.

INFJs are capable of holding their tongue when they realize it is the necessary thing to do. When it is best to keep quiet they are certainly capable of keeping to themselves. Most of the the INFJs are buried in their own inner thoughts anyways, and so constantly having to express their opinions isn’t necessary natural for them. INFJs are certainly capable of speaking out when they need to, but they don’t like opening their mouths with only harm will come from it.

ENFJs can be chatty and talkative people, but that doesn’t mean they can’t bite their tongue when it is the right thing to do. In situations where they realize keeping themselves quiet is going to the best thing for everyone around. This can be a bit difficult for them sometimes, especially if they have something they want to share. But ENFJs do their best to take care of their loved ones and so they don’t want their actions or words to be harmful in any way.

While INFPs don’t like feeling forced to bite their tongue about something, they can do this if they believe it is the right thing to do. INFPs speak out about what they believe in and aren’t afraid of stand up for themselves. At the same time, they don’t want to open their mouths if it is going to hurt others or be completely pointless. INFPs will try to be conscious of this, but it isn’t always easy for them to do so. They have a lot going on inside of their minds and sometimes they can speak before realizing they shouldn’t have.

ENFPs sometimes have a hard time biting their tongue, and might even want to get the last word in. They have so much going on inside of their minds that they can often speak without really realizing what the response will be. ENFPs also struggle to hold themselves back, especially when they are excited or passionate about something. They can become so caught up inside of their own thoughts and feelings and sometimes they just fail to bite their tongue even when it might be best.

INTJs aren’t afraid of speaking up, and rarely do they keep quiet to spare someone else’s feelings. At the same time, INTJs are capable of recognizing when biting their tongue will be the most prudent and wisest decision. If holding back is the smartest choice for the INTJ, then they certainly won’t be incapable of doing this. When they speak it is very intentional, and so they won’t simply open their mouths without thinking it through.

ENTJs do try to think things through before speaking, but sometimes they become a bit passionate about a subject. ENTJs can become so focused on progression and being efficient, that sometimes they fail to bite their tongue when maybe it would be the most prudent choice. They simply become caught up in the task and want to do whatever it takes to get things done and make sure that they are doing it to the best of their ability. For the ENTJ it is important to be conscious of their actions, but they aren’t always skilled at biting their tongues when they are focused on something else.

INTPs are great at biting their tongues, and find this more natural than speaking out. They often have to push themselves to really speak up about something, rather than struggle to keep it quiet, INTPs just aren’t the most chatty people, since they have so much going on inside of their minds all of the time. It feels easier for them to let things slide, than to constantly feel the need to open their mouths about what they see and feel.

ENTPs are often outgoing people and so sometimes they fail to bite their tongue when they probably should. This is often more intentional than it seems though, since the ENTP curiosity can get the better of them. They sometimes want to push the limits in order to see what will happen, instead of holding back even when they know it would be the more prudent decision. For ENTPs sometimes it is about taking risks in order to really learn about themselves and others.

ISTJs are definitely capable of biting their tongues, since this is often more natural for them. They aren’t always the chattiest people, and so they enjoy keeping quiet in most situations. ISTJs don’t have to struggle to bite their tongue most of the time, it just comes more naturally than speaking up about something. They have a lot going on inside of their minds and are often more comfortable doing things themselves. While they can certainly speak up when they need to, ISTJs are good at biting their tongues.

ESTJs can actually have a hard time biting their tongues, even when it might be the wiser choice. ESTJs often speak out about what is on their mind, even if that is a bit tactless and harsh. There are situations where the ESTJ will do their best to keep quiet and bite their tongue, but this is something they have to think about beforehand or else it become challenging for them. They simply are so focused on the task at hand and so sometimes they fail to keep themselves quiet.

ISFJs often find it easy to bite their tongue, especially to avoid hurting someone they love. ISFJs would rather keep quiet than speak out about something, especially if it is the right choice to do so. They don’t like opening their mouths when they know it is going to cause harm, and so ISFJs do their best to keep quiet. They often think about things before they speak, and sometimes are more hesitant than they are rash.

ESFJs are usually conscious of their words and like to avoid saying anything that might be harmful in some ways. They would rather bit their tongue if it is the right choice, especially if it is going to prevent them from hurting someone. ESFJs realize that sometimes it is best to keep quiet, even when it can be difficult at times. There are certain situations where the ESFJ might struggle to bite their tongue, but this is often when they are mad or worked up in some ways.

ISTPs aren’t always the most chatty people, and so they don’t often have to bite their tongues. It is often more conscious when they speak about something, and this is something that happens more in the moment. While ISTPs might not be the chattiest of people, they don’t often feel the need to hold back when they do want to discuss something. This can cause them trouble when they should bite their tongue, since they can get caught up in the moment.

ESTPs don’t always do well at biting their tongues, since they live so much in the present moment. They sometimes find themselves speaking about something when they know they shouldn’t. ESTPs sometimes struggle to really think things through before speaking, and can get so caught up in the moment that they speak before thinking if they should. Most of the time ESTPs will find a way around these situations, and can get themselves out of trouble that they have gotten themselves into.

ISFPs can be so caught up in the moment and following their emotions, that they struggle to bite their tongues sometimes. For the most part ISFPs do keep to themselves and aren’t always the chattiest people around strangers, but that doesn’t mean they are good at holding back when they are around loved ones. When the ISFP is with someone they are comfortable with, sometimes biting their tongue becomes difficult.

ESFPs are outgoing and chatty people, and so they do sometimes struggle when it comes to biting their tongues. They often speak before really thinking about whether or not they should, and this can get them into sticky situations sometimes. ESFPs don’t intend to upset anyone with their words, they simply become so caught up in living in the present and doing what feels right at that moment.