ENTP Virtues: The Importance of Inner Morals for the ENTP 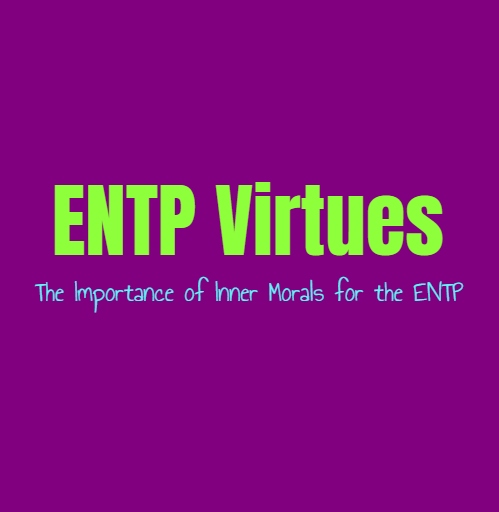 ENTP Virtues: The Importance of Inner Morals for the ENTP

ENTPs aren’t always viewed as the most moral people, but this is often a misunderstanding from people who don’t really know how the ENTP thinks. They do have their own set of morals, they just don’t often base them on emotions or inner feelings. Instead the ENTP uses logic and information as a means of deciding what they view as morally sound. ENTPs who are younger might appeal less moral to others, since they are still testing the limits and figuring out what they believe in and stand for. ENTPs are complex people who believe in growing and this does cause their views to change as they get older and form more concrete belief systems.

What Being Virtuous Means to the ENTP

ENTPs don’t always appear to moral people, and sometimes this is done intentionally. They don’t always portray and image which is accurate to who they are, since they don’t enjoy feeling vulnerable around others. The ENTP might not really view themselves as moral, since they rely more on logic than they do emotions. They might have this idea that someone who is virtuous is more focused on being kind and always caring about the emotions of others. This can cause the ENTP to see themselves as immoral, since they are much more interested in focusing on logic and practicality than they are the emotions of people or even their own emotions.

The ENTP might have developed this image of a virtuous person as being always noble and striving to tend to everyone around them. They can develop this idea based on the pressure they receive from those around them, and this can certainly cause the ENTP to view themselves as less than moral people. They see this idea of a virtuous person as someone who strives to always be honorable and who sacrifices themselves for the good of others. The ENTP sees someone who is always honest, but someone who will go above and beyond to take care of other people and make a real difference in their lives.

Where Their Virtues Come From

The ENTPs morals often come from years spent learning and pushing the boundaries around them. This is why ENTPs can appear immoral at times, since they learn from experiencing things and sometimes this means pushing those limits. They have to try and venture down different paths and sometimes this means dipping their toes in less savory waters. ENTPs do this because they believe in remaining open to different options in order to truly learn what they believe to be right. Without really exploring different ideas the ENTP doesn’t feel like they can be sure that they are making the right choices in life. This can certainly be something which confuses people around them, especially when the ENTP is pushing the buttons of other people in order to learn more about them.

The ENTPs morals often come from logic and reason, and from figuring out the results of their own actions. This can certainly cause the ENTP to get into sticky situations and even causes them to do things which they might end up believing to be less than moral. This isn’t something which the ENTP feels remorse from most of the time, because they believe in being able to learn from experience. They want to always be open to new things and different information, and believe that the pursuit of knowledge is a truly noble and important one. The young ENTP can seem less moral because they are still pushing those boundaries and testing different ideas before they actually come to their final conclusions about what is right and what is truly wrong. This is a process for the ENTP, and is something which takes a while for them to really come to understand themselves.

The mature ENTP might start to see morals in a different light, and this can be a good thing as they get older. They can start to shed those preconceived ideals of what a truly moral person is, helping the ENTP to meet their own moral expectations in life. When they stop searching for an idea of what is right or wrong based on other people’s expectations, the ENTP can actually begin to view themselves as morally good people. They do care about preventing harm to others, and don’t believe that their actions should constantly take from or hurt those around them. While ENTPs might not always focus on the feelings of others, they don’t believe in intentionally harming people for no reason whatsoever. They also believe in being sincere about who they are and what they want from others. To the ENTP being honest with someone even if it might hurt their feelings, is actually the right thing to do. They feel it is important if this sincerity is going to actually help this person and make them better educated and more self-aware. While their bluntness can be hurtful or seen as harsh to others, for the ENTP it is about always being honest and not hiding things which could actually help someone become better or make the right choices for their future.