Are You Good at Bouncing Back, Based on Your Personality Type 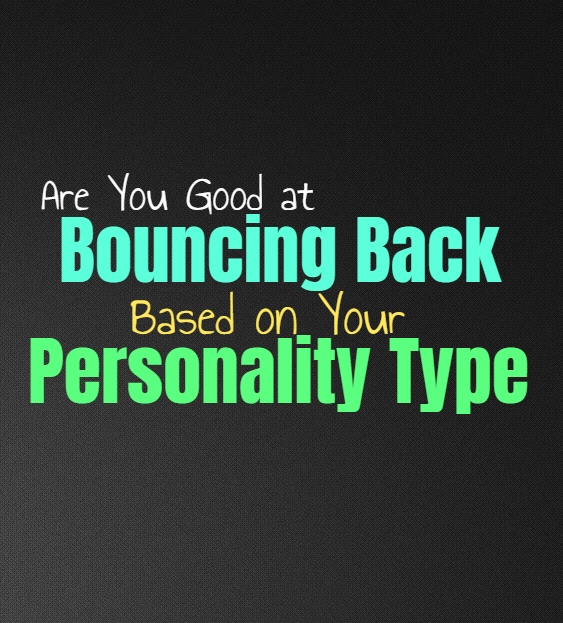 Are You Good at Bouncing Back, Based on Your Personality Type

Some people are naturally good at taking their failures and struggles and finding the best way to really bounce back. They don’t accept defeat and instead take on this challenge as an opportunity to advance and improve. Here is how good you are at bouncing back, based on your personality type.

INFJs do their best to bounce back, but at first they might need time to lick their wounds and analyze what has happened. They are hard on themselves most of the time, and don’t like feeling as if they are failed themselves or others. When they realize that have made a mistake they sometimes need to be alone for awhile in order to recharge and figure out how to really bounce back from this. INFJs need inspiration and people around them who will help motivate them and believe that they can really bounce back.

ENFJs are definitely about bouncing back and being able to continue moving forward. While they are capable of really bouncing back, they don’t like having to do this. ENFJs prefer to get things right the first time around and don’t like feeling as if they have failed. For then bouncing back just means they have to work even harder to make things right and to accomplish their task. They care about getting things done and want to be able to live up to their own high expectations.

INFPs do sometimes need time to recharge after they have endured some sort of failure or struggle. They need this time alone in order to analyze the situation and really find a way to figure out what went wrong. INFPs can certainly be hard on themselves even though most people might not see this about them. When they have failed they can sometimes feel the need to wallow and spend time feeling it before they can find a way to bounce back. They have warm and imaginative spirits, and are capable of overcoming many things and finding ways to bounce back.

ENFPs can have a hard time bouncing back from defeat right away, since they need time to really feel what has occured. They can be hard on themselves and don’t like feeling as if they have failed or let themselves down. ENFPs are dreamers and sometimes this strong sense of imagination and creativity is what makes it difficult for them to endure feeling as if they have failed themselves. They need to take this time to wallow and experience the situation, before they can bounce back and find their next endeavor.

INTJs are definitely capable of bouncing back from defeat or mistakes, since they don’t believe in simply backing down. When something does not go as expected they want to work hard and analyze the situation. The INTJ will do whatever it takes to overcome their failing and improve upon themselves. They care about getting things done to the highest of standards and so they don’t accept anything other than being capable of bouncing back.

ENTJs do whatever they must to bounce back, and will work hard to get things done right. They have very high standards and believe in being efficient with everything they do. ENTJs don’t believe in just backing down or allowing others to take advantage of their failings. If they make a mistake they want to reevaluate the situation and figure out the best ways to improve and bounce back even stronger and more capable than before.

INTPs do know how to bounce back, but they do have times when they take these failings harshly. They often need to take time alone to analyze and figure out what went wrong, but they need to be sure not to overanalyze. INTPs don’t like making mistakes, but they want to find out how they can learn from the situation. When they take the time to learn from any failings then they can really become stronger from it and bounce back even better than before.

ENTPs believe in taking a situation and finding the best ways to learn from it and improve. Their ability to grow and adapt is what helps them to bounce back even stronger than before. ENTPs don’t like just giving up and allowing a failure to define them, instead they almost always find the best way to bounce back. Where they might struggle is when it comes to getting hurt in relationships, in these situations they just need time before they can bounce back.

ISTJs do believe in bouncing back since they naturally are not quitters. They will do whatever it takes to get things done, and to live up to their own high expectations. Even when things are a bit challenging, the ISTJ wants to push themselves to improve and get things done. If they make any mistakes and fall behind, they will simply work hard and analyze the situation in order to bounce back stronger than before.

ESTJs are definitely capable of bouncing back and finding ways to improve when things don’t go as expected. ESTJs really don’t like making mistakes and so these situations can be frustrating for them, but they also don’t believe in quitting. If they fall behind or make mistakes they will analyze the situation and find ways to improve. ESTJs also back backup plans for when things don’t go as they had hoped and they will push themselves forward no matter what.

ISFJs do believe in bouncing back and trying to come back even stronger than before. They care about upholding their standards and being able to please their loved ones. For the ISFJ making mistakes is not something they are very happy with, but they will do their best to overcome these failings and find a way to bounce back. ISFJs might even want to overcompensate the next time around to make things better.

ESFJs will certainly be capable of bouncing back when things don’t go as expected. They don’t like failing though and can take this rather hashley. ESFJs often blame themselves and have a hard time really dealing with their mistakes at first. While they might be hard on themselves after failing, they do believe in bouncing back and trying their best to improve every area which may have failed beforehand.

ISTPs try to keep moving forward and don’t like allowing themselves to feel defeated. When something goes wrong they just want to keep progressing, which can be considered bouncing back. Instead of finding ways to combat their failings the ISTP just wants to continue growing and find others means of expanding and exploring new options.

ESTPs can bounce back but certain failings do weigh heavily on them. If they feel like they have made a mistake they can be rather hard on themselves. They don’t want to feel like they have failed their loved ones, and especially become unnerved if they cannot accomplish something they deeply want. When the ESTP does make a mistake or fail at something they often need time to cope before bouncing back.

ISFPs can take certain failings rather hard, but they will try to find ways to move on from these struggles. They care about following what feels right for them and if they lack inspiration they might want to change their path and move in a different direction. ISFPs don’t want to feel as if they have given up, but something they need to move in a different direction in order to feel inspired and motivated.

ESFPs don’t like allowing things to hold them back, and so when they are very capable of bouncing back. If something does not go as expected the ESFP will just find another way to improve and keep moving forward. They might need the support of their loved ones to truly bounce back, but they are definitely capable of doing this. They care about connecting with others and don’t like allowing themselves to give up.