Do You Know How to Assert Yourself, Based on Your Personality Type 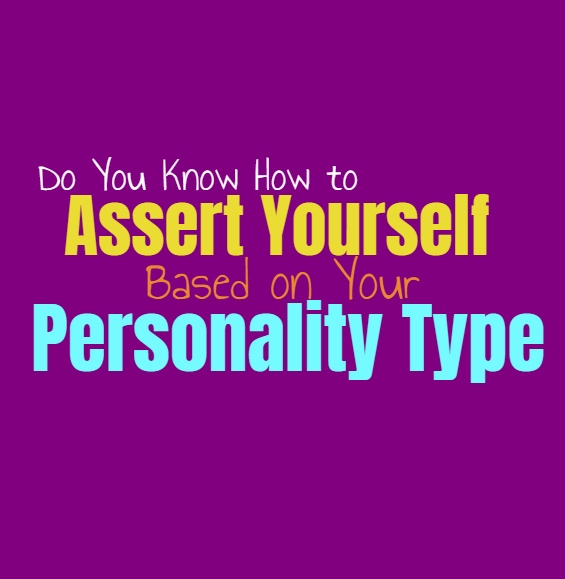 Do You Know How to Assert Yourself, Based on Your Personality Type

Some people are naturally skilled at asserting themselves and in expressing what they want in a situation. Others find it difficult to really take charge in this way and be this type of assertive person. Here is how good you are at asserting yourself, based on your personality type.

INFJs don’t really like being in situations where they have to assert themselves or command attention. For them it is easier when they can focus on doing things their own way and on their own time. Having to assert themselves in order to get the response they need, can be a bit unnerving and even exhausting for the INFJ. They are capable of being assertive when they feel truly inspired or connected to something, but this isn’t something they bring out whenever they feel like it.

INFPs aren’t usually viewed as assertive people but this is because they don’t enjoy putting themselves into these tense situations. INFPs prefer to keep to themselves and don’t want to create discord around them. Instead INFPs would much rather focus internally to achieve what they want and avoid situations where they are forced to assert themselves. While this isn’t something they often prefer, that doesn’t mean they are incapable of it. When the INFP is truly passionate about something then they are more than capable of asserting themselves.

ENFPs are not afraid of asserting themselves, even though they prefer to avoid discord. They often want to focus on positive things and don’t like getting caught up in a power struggle. While ENFPs would rather not focus their energy on situations where they have to assert themselves, this does not mean they are incapable of doing so. When the ENFP is passionate about something they are more than capable of making their presence and their desires known.

INTJs are very good at asserting themselves and making their intentions known in any given situation. They are focused and driven people who don’t like allowing things to hold them back or stand in their way. When they need to make their intentions clear in a situation they can certainly step in and assert themselves. They are also capable of leading and of taking charge if the situation calls for it. This is mostly because INTJs are efficient people who want to be sure that the right information is being circulated.

ENTJs are naturally very assertive and even sometimes aggressive people. They are not afraid of stepping into a situation and asserting what they need and want to be done. They believe in being efficient and this desire to get things done the right way, is part of what makes them so capable of asserting themselves. ENTJs are natural leaders and actually enjoy being able to take charge and really lay everything out for people to follow and understand.

ISTJs are naturally capable of asserting themselves, especially when it is necessary. They won’t stand in the background and allow people to do things incorrectly or take advantage of them. ISTJs are often much more strong-willed than people realize, since they keep focused on getting things done and don’t want to involve themselves in drama. When the ISTJ needs to assert themselves in order to get something done, then they are more than capable of doing this.

ESTJs are naturally assertive and controlled people, who are not afraid of taking charge of a situation. They feel more comfortable in a leadership position and are not afraid of maintaining this sense of dominance. ESTJs can assert themselves in pretty much any situation and are not fearful of doing so. They don’t like backing down or floating through without making their presence known and their intentions clear.

ISFJs don’t like feeling as if they have to assert themselves, especially if this might make others feel uncomfortable. They want to be able to put themselves in situations where they can get the job done without being too commanding. ISFJs sometimes avoid situations where they have to assert themselves, mostly because they don’t want to make others feel uncomfortable or seem as if they are being demanding or rude towards them.

ESFJs don’t like being too assertive if the situation does not call for it, but that doesn’t mean they aren’t capable of it. ESFJs like to coerce a situation and make the process more subtle. They don’t like making people feel uneasy and don’t want to appear overly aggressive. If there is a situation where they have to assert themselves in order to get something done, the ESFJ is not afraid of doing this.

ISTPs don’t really care to be assertive unless they feel it is entirely necessary. It isn’t that they are afraid of asserting themselves, they just prefer to avoid these types of situations. ISTPs want to have their own space and live their lives with freedom and independence. They often want to avoid these types of drama and don’t like getting into situations where they have to assert themselves and make their intentions known.

ESTPs are not afraid of asserting themselves if need be, but they do tend to avoid these situations. They don’t want to feel as if they are forced to take charge or be the assertive ones in the group. They do sometimes find themselves stepping back in order to avoid too much discord. ESTPs live in the present and go by what draws their attention in that moment. There may be situations where they know they are right about something and in these cases they are not afraid of asserting themselves.

ISFPs are not often assertive people, since they prefer to live a more open and free lifestyle. They don’t like feeling as if they are obligated to assert themselves and command attention from others. ISFPs can be a bit more passive in these situations, not wanting to appear like they are trying to dominate or control those around them. Having to assert themselves can make the ISFP feel uncomfortable and doesn’t often fit into who they are and what they want.

ESFPs are often more capable of asserting themselves when something important is on the line. They often prefer to live in the moment and focus on positive things in their lives, not wanting to be too assertive or even aggressive. For the ESFP it is best to live in the present and focus on the things which make them happy and make their lives easier. They will assert themselves if someone is taking advantage or holding them back, but this takes time for them to get to this situation.