Here’s How Seductive You Can Be, Based on Your Personality Type 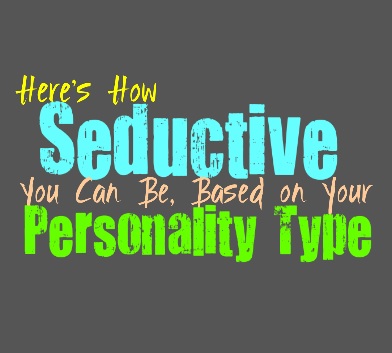 Here’s How Seductive You Can Be, Based on Your Personality Type

Some people have a knack for being seductive, and can often convince and lure others into just about anything. There are others who feel somewhat awkward with these situations, not really knowing how to behave in a manner that is perceived as seductive. Here is how good you are at seduction, based on your personality type.

INFJs don’t often perceive themselves as seductive, but they do have this within them. When they feel a deep connection with someone and are comfortable, they can often draw out this more seductive behavior. They have deep and complex personalities, which is often a naturally seductive quality. Their mysterious nature can definitely be something that draws people in, and their behavior can be rather penetrating. INFJs would rarely call themselves seductive, but they do possess many qualities that can easily seduce others.

ENFJs can definitely have a seductive way about them, especially since they can easily understand what others want. Being able to read the emotions and desires of others can often make it easy for the ENFJ to respond to their needs and desires, making seduction somewhat natural for them. While ENFJs do have a seductive side, it might not come out in obvious ways. They simply know how to lure someone in, and make them feel comfortable and responsive.

INFPs might not feel like naturally seductive people, often believing that they can be awkward in these situations. For the INFP it is more about behaving naturally, since this is when their seductive side comes out. If they feel pressure to flirt or be alluring, it can come off as completely awkward and uneasy. They don’t like being put on the spot in this way, and really don’t seem seductive when they actively try to be. Where INFPs can be seductive is when they are simply being natural and connecting with someone on a deep and passionate level.

ENFPs might not appear outwardly seductive, often behaving in a more open and playful manner. While ENFPs might not behave in a way that makes others believe they are capable of seduction, this is often something that lies within them. ENFPs can sometimes be awkward when they are actively trying to be seductive, since they personally feel a bit uncomfortable with this. When the ENFP is truly seductive to others, is when they are being natural and simply allowing their passionate nature to shine through.

INTJs might not appear seductive to most, since they can seem somewhat stern and even emotionless. INTJs just don’t express themselves in a way that can be easily perceived from an outside view. INTJs are often most seductive around people who can appreciate their intellect as a means of seduction. They are often aware that their mysterious and intellectual nature can be rather alluring to the right people. For someone who is drawn to this the INTJ will be capable of being extremely seductive.

ENTJs do not often appear seductive from an outside view, since they can seem a bit stern and overly focused. They have an aggressive nature and strive to get things done no matter what that means. They go after what they want and will work to make things happen. When the ENTJ does want to seduce someone they can actually be rather charming and alluring. This is often most effective with people who are drawn to their intelligence and their assertiveness.

INTPs would rarely consider themselves to be seductive people, since they don’t always find it natural or comfortable to actively attempt to draw someone in. While INTPs might not feel like the most seductive people, they have very mysterious and alluring qualities to the right people. For those that are curious and want to learn more about the INTP, their distant and aloof personalities can be extremely seductive without them actually trying. For the INTP working to seduce others can be a bit challenging, but often their natural attitudes can be rather alluring.

ENTPs actually can be rather seductive people, since they have such larger than life and alluring personalities. They often know how to draw people in, using their wit and charm in order to do so. ENTPs can be fairly aggressive when they are going after what they want, and they aren’t afraid to use a little seduction in order to accomplish this. ENTPs know how to draw someone in, and can often find ways to appear charming and appealing.

ISTJs don’t really view themselves as seductive people, since they are more practical than emotional. They can be rather passionate towards someone they care for, but having to actively seduce others can feel unnatural. ISTJs would rather just be sincere and open with what they want, instead of attempting to seduce someone with words or actions.

ESTJs don’t often consider themselves seductive, since they prefer to focus on obtaining things in a practical way. They do what they can to achieve their goals, and do whatever they can to make it happen. There are times when the ESTJ can be assertive which is definitely seductive for some people, but doesn’t work on everyone necessarily. They simply would rather be direct about what they want rather than having to come at it from a seductive angle.

ISFJs don’t really like having to be seductive, and can be seen as rather subtle and reserved. There are times when they can actually be surprisingly seductive though, especially towards someone they care for deeply. ISFJs can be rather passionate people even though it doesn’t always show outwardly. They understand others and can often read the best way to intrigue people and give them what they want.

ESFJs can actually be rather seductive when they want to be, especially since they understand the emotions of others. Being able to connect with people and read what they want, helps the ESFJ to feed into this. They often know what others desire and will do their best to give this to them. ESFJs are also great at adapting, and will do whatever they can to be more alluring to someone they are interested in.

ISTPs are naturally mysterious and charming people, which does help them when it comes to being seductive. While most of the time this is just something that happens naturally, ISTPs do know how to be alluring. They prefer to be on their own most of the time, but this aloof behavior is often exactly what can be seductive to others.

ESTPs do often have a rather seductive side to their personality, especially since they easily understand what others desire. They are good at being rather charming and can become rather irresistible because of this. Most people find themselves drawn to their mysterious and charming nature, making it natural for the ESTP to be seductive to most. When they are truly interested in someone they often know how to draw them in.

ISFPs actually can be rather seductive people since they are truly charming. They have a sensitive heart, but their passionate side often draws people in. ISFPs can be extremely alluring people, with a naturally whimsical and fun nature. They often intrigue people, and have a way of whisking them off into their own little world.

ESFPs can certainly be seductive people, since they are fun-loving and alluring. They have a charming nature which helps them draw people in and keep them interested. They also seek to have fun and can be rather passionate people, which is often something that causes them to be rather seductive when they want to be.