In order to understand the ENFP you have to know their four main functions. 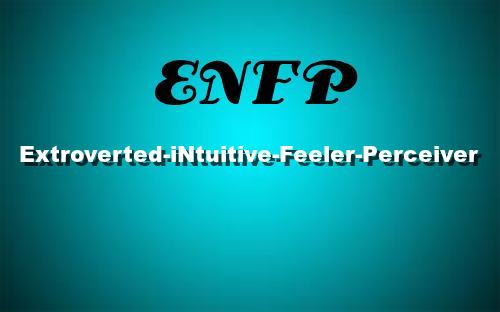 The first function of the ENFP is Extraverted Intuition or Ne and this is basically how the ENFP sees the world. It’s through their Extraverted Intuition which is good at being objective and seeing multiple possibilities and understanding other people’s point of view. It understands where others are coming from and sees both sides of the coin. This also gives them a good grasp of the big picture as well. They can come to conclusions that other people might have a hard time drawing. Ne also gives ENFPs an off the wall sense of humor in a way that other people might not understand and might see as quirky or goofy.

Next is Introverted Feeling or Fi. This is more internal. This gives the ENFP their moral structure and forms their own internal beliefs of what they believe is right and wrong and how things should be. It’s their own internal convictions and since this is introverted it can be hard for them to explain to others. While they could be having strong feelings internally, some others might not see that. And sometimes when they get stressed out they may become uncharacteristically strong about these and outwardly try to express them, which might shock some other people that they’re close to. But they can come out when they’re feeling a little overwhelmed about their feelings versus wanting to accommodate people. It could cause some conflict.

Extraverted Thinking, or Te, is developed a little bit later in the ENFPs life. This is basically like how they organize the world externally. They want things to be more structured and they get better at directing people or getting people into roles that they feel they’d be best in. Te is working towards making sure things happen.

One of the main strength of the ENFP is that they’re very enthusiastic and energetic. They have a charisma about them and can get people inspired, excited, or motivated. They’re able to use that very well. They’re also genuinely interested in people. They’re interested in having conversations with people and getting to know them better. They enjoy moving on to deep issues and over just small talk all the time. They really enjoy getting to know someone as a person deep down. And they are also extremely intuitive and perceptive about people. They can understand people, their motives and where they come from. This can help them easily deal with people in new situations because they can understand where most people are coming from and they’re very good at grasping that very quickly. They’re also able to grasp difficult concepts and theories as a whole. They can see the big picture quickly.

While all types have their strengths, obviously each type has a few weaknesses. One of the weaknesses of an ENFP is that they dislike performing routine tasks. They can get bored easily. Anything that is very structured and repetitive can really wear on the ENFP and demotivate them.
This can obviously cause some problems with paying bills or keeping their house clean. It obviously it can be a point of stress for some people in their lives. While ENFPs are typically very accommodating of other people and understanding them, they do need approval and appreciation from others or they definitely enjoy hearing that from other people. That can be a blessing and a curse because sometimes if they’re not getting that approval it could worry them or not keep their spirits up. Another potential problem is that ENFPs have a tendency to want to start many projects. They get really excited to start these projects but they might not always finish. They have that “shiny new object syndrome” and can want to move on to the next thing while like their other projects are still not completed.
ENFPs are also by nature very agreeable and want understand other people. They want to go along with people. This can cause them to be vulnerable to schemers or con artists. Because they are very accepting of others, people can take advantage of this.

When the ENFP is under stress they go into what is known as their shadow mode. When this happens they may become overwhelmed by unimportant details. The routine or structure or that they want to avoid can sometimes make them overwhelmed. They might revert back to dong these repetitive tasks to excess. They can also become very critical of others. They may just say what is on their mind and have complete disregard for others feelings. This is obviously uncharacteristic of how they typically are. An ENFP can also do things to excess when they are stressed such as over eating, drinking, or abusing drugs.
When they’re under stress they could take charge without consideration of others. This comes out because of their Extraverted Thinking and wanting to organize their external environment. In doing so, they might be pretty forceful about it. While it is sometimes a good thing, it can cause some conflicts with people that they’re close to when they’re trying to get tasks accomplished.

Check out these 22 Reasons Why You Are An ENFP!

I have some free reports on the ENFP. I have one on personal growth as well jobs and careers that would be suitable for the ENFP. And to get them I would encourage you to enter your email below, check your inbox, and click the confirmation link inside.

*We will occasionally email you about new postings on the site as well as ways that an ENFP can grow and improve themselves.