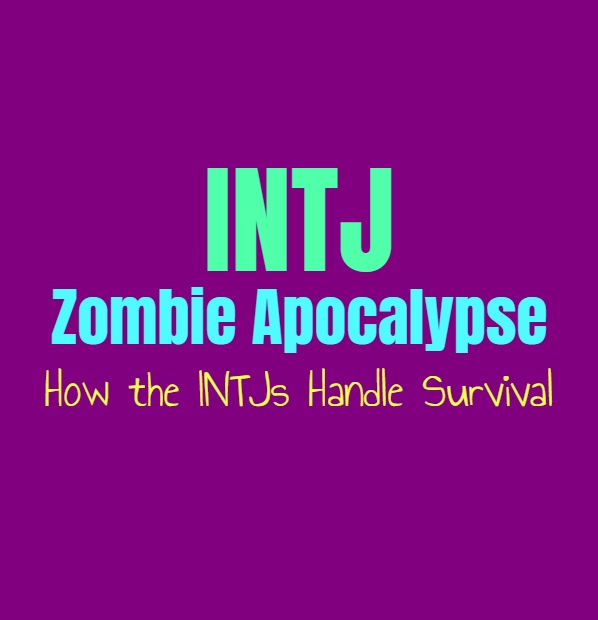 Most of us wonder what it would be like to survive through the first wave of a zombie outbreak. Or maybe it’s just those of us who have the nerdy imagination to explore those types of futures. We imagine ourselves in a reality where the world has crumbled and we have to fight for survival, or even fight to protect the ones we love. While pretty much everyone envisions themselves as part of the end of days, in reality many people wouldn’t be so lucky. So instead of just imagining this future, let’s dive a little deeper into how your personality type might help or hinder you in the zombie apocalypse.

When it comes to accomplishing goals the INTJ does not like to think of themselves as incapable of doing anything they set their minds to. Because of this they often view themselves as being highly capable of handling themselves in a zombie apocalypse. They might even picture the end of days and envision themselves as someone who can lead others and keep themselves safe. While this might be true, there are still many factors that need to be considered. INTJs have strengths which could help them in a zombie apocalypse, but just like everyone else they also possess certain weaknesses which could really hold them back.

INTJs are natural problem solvers who are capable of remembering a lot of different facts. Their ability to strategically plan and figure out the smartest course of action, is something which can be very beneficial. When they are in a sticky situation and need to figure out the best way to fix the problem. INTJs are naturally skilled at this. Their minds can analyze the situation in unique ways which really helps them to strategically plan and find the most efficient solution. Getting things done right and being accurate with their actions is truly important to the INTJ. These natural abilities are what helps the INTJ to figure out useful plans and solve problems which might be too challenging for other people to overcome.

INTJs are rational people who don’t want to let emotions get in the way or cloud their judgement. They have a natural ability to shut out those feelings and focus on what needs to be done. While emotions can be a strength in so many situations, they are rarely that useful when it comes to survival and escaping the clutches of the undead. In order to survive you have to be capable of focusing on the facts and you must be rational about your choices. INTJs are more than capable of doing this, and find it much more natural to push aside emotions and focus on the cold hard facts of a situation. Their ability to look at the evidence and keep their heads clear, is certainly a great strength in this type of life or death situations. Instead of being caught up on the sentimental, the INTJ wants to remain focused on the things they can fix or solve.

They are often intelligent people with minds which can hold onto so much information at once. They likely have cataloged information about survival situations, possibly even done this intentionally. INTJs believe in being prepared for just about everything they possibly can, and this might even include survival situations. The INTJ has likely spent hours upon hours researching and learning useful facts and tools in order to adapt and protect themselves. While they may not have been able to actually execute this knowledge, the INTJ will do their best to use what they know and work hard to get things done efficiently. They don’t simply give up because things are hard, and this is something which will help the INTJ push forward even when they might feel uneasy or afraid of the situation and the world around them.

INTJs can sometimes be arrogant about things, and this can be something which gets them into trouble. Their attitude can cause the INTJ to create tension around them, especially if they feel like they know better than everyone else. Sometimes their naturally direct approach can be something which pushes people away or even causes them to get into trouble with the wrong people. Because of this, it can be best if the INTJ avoid larger groups and instead only sticks with people they know well and can trust completely. While it can be ideal to avoid people in these situations, it is also important to be capable of keeping the peace and not angering the wrong groups.

INTJs are not as connected to the present moment or the physical world around them, which can be a weakness. When the zombies are invading and taking over, one needs to be focused on the world around them and be very connected to their surroundings. You have to be capable of using your physical senses in order to keep constantly alert to any threats. INTJs really don’t like having to focus on the physical and dislike being forced into the present moment. This really isn’t a natural strength of theirs and so they would certainly have to adapt and learn to change this part of themselves. This would not be easy for the INTJ, since it really isn’t part of who they are and could cause them to feel drained and emotionally exhausted after a while.

While INTJs have many strengths which would set them apart in the zombie apocalypse, they also have some weaknesses which could make things challenging for them. In order to survive and overcome the end of days, the INTJ would have to adapt to many different situations. They would have to strengthen some of their weaknesses, and likely find people who could help them with the specific things they lack. INTJs don’t really like dealing with other people and while this can be a good thing, it can also prevent them from making the right connections which could ultimately save their lives. If they want to endure the apocalypse they would certainly have to adapt to some of these weaknesses and find ways of overcoming them.