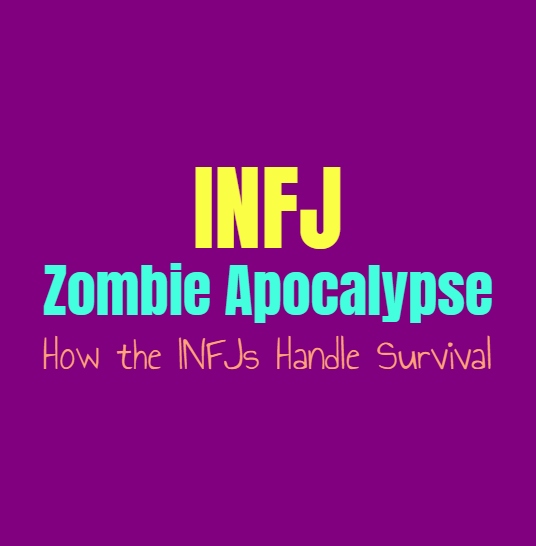 Most of us wonder what it would be like to survive through the first wave of a zombie outbreak. Or maybe it’s just those of us who have the nerdy imagination to explore those types of futures. We imagine ourselves in a reality where the world has crumbled and we have to fight for survival, or even fight to protect the ones we love. While pretty much everyone envisions themselves as part of the end of days, in reality many people wouldn’t be so lucky. So instead of just imagining this future, let’s dive a little deeper into how your personality type might help or hinder you in the zombie apocalypse.

When it comes to surviving the zombie apocalypse the INFJ is likely to have their own unique set of strengths and weaknesses. While these things won’t entirely determine whether or not you will be capable of surviving the zombie outbreak, there are certain talents which can really help each person push through and overcome. For INFJs there are more strengths than people might realize, but there are also plenty of weaknesses which might make it challenging for them to endure the zombie apocalypse.

The INFJs sense of intuitive is something which can be an incredible strength when things really go down during a crisis. When the apocalypse commences the INFJ will be capable of seeing around the corner, and might have even predicted it beforehand. They have an innate ability to sense when something is wrong, and will do their best to steer clear of anything truly dangerous. While others might head right into the danger, the INFJ can feel when they need to take a step back and even run in the other direction. This intuition can guide them, as long as the INFJ has learned to trust in this part of themselves. The INFJ who relies on their natural intuitive abilities is going to see where the danger is, and also see where the smartest path most likely is.

This intuition also helps the INFJ get a strong sense of who they can and cannot trust. As long as they can learn to rely on their ability to read people and tell when they are lying, the INFJ can get a good idea of who they can trust. This is something which can be an incredible strength in the end of days, especially when people are only out for themselves. Trusting in the wrong person can cost you your life, which is why know who they can truly rely on is a vital skill to have. The INFJ who trust in their instincts and follows who they know they can trust , will be capable of surviving much longer than the INFJ who doesn’t. The more they trust in this natural intuitive strength, the better of the INFJ will be in the zombie apocalypse. While others might be relying on the wrong people and going in the worst directions, the INFJ will be capable of reading their surroundings and will figure out the best path to take.

INFJs are often great at remembering details and facts, especially since they enjoy researching and learning about new things. Spending so much time reading actually can be a benefit, since the INFJ likely holds onto a lot of different useful information. While knowing survival techniques and information isn’t the same as executing, it is still an important tool. The INFJ might not be great at certain physical things, but knowing the information and facts can help them survive, especially if they have a partner who is great at executing these steps.

A weakness for the INFJ can be the fact that they become so caught up inside of their own inner minds. When it comes to living in a world surrounded by zombies ready to feast on your tender flesh, being distracted by your own inner world really isn’t the best thing. The fact that INFJs want to spend so much time inside of their thoughts and don’t really like living in the present, can be something which holds them back or becomes a stress in this situation. Not being able to really live inside of their thoughts and inner imagination can be something which causes the INFJ to feel emotionally exhausted after a while. They will really have to pull out of their own minds and live much more in the present, and this really is not a strength of the INFJ.

INFJs are not often connected to their physical body as much as their inner minds. This can be something which holds them back since the zombie apocalypse will require a lot of physical activities, as well as a focus on the world around you. INFJs will often feel a bit stressed with this type of environment, and will have to work on parts of themselves which are often weaker. This doesn’t mean it is impossible, but it will certainly be something which they struggle with and will need to adapt to in order to survive and be capable of handling themselves. INFJs are more focused on mental strength rather than physical strength and endurance, and so they might find this to be a drastic change.

Ultimately these strengths and weaknesses are not the only things which will decide whether or not we live or die in the zombie apocalypse. There are so many other contributing factors, but these details can certainly make a vast difference. The INFJ has plenty of strengths which can benefit them and make them a great asset to anyone zombie fighting team. In the end though, they would need to adapt in ways which could become a bit challenging for them after a while. The INFJ would need to focus on living in the present and this can become draining for people who are much more focused on their inner minds than the world around. The INFJ might benefit from teaming up with someone who is very focused on their physical self and can pay attention to what is going on around them.