Can You Be a Bit Deadpan, Based on Your Personality Type 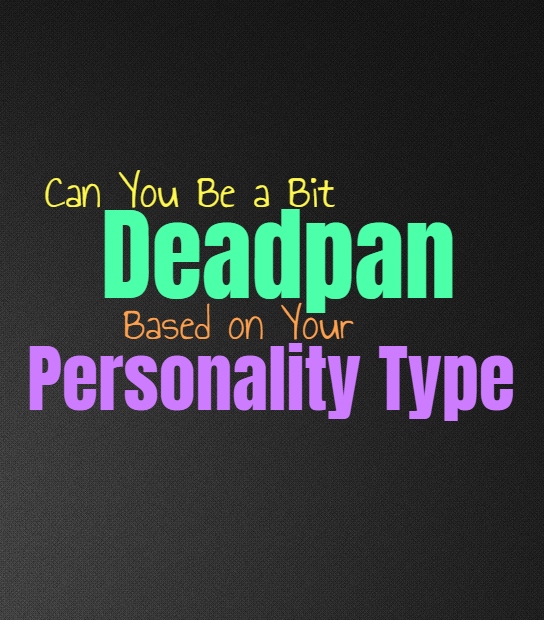 Can You Be a Bit Deadpan, Based on Your Personality Type

Some people have more playful and fun personalities, while others can express things in a more deadpan manner. These people might do this on purpose, or it might just be a natural way in which they express things. They are deapan without really intending to be, their voice and expressions just come out a bit flat. Her is how deadpan you can be, based on your personality type.

INFJs can certainly be a bit deadpan at times, but they are complex people who possess many different sides to them. They might possess an immensely playful side, but INFJs often show their deadpan personalities more prominently. They can often express themselves in a deadpan manner, not naturally showing a lot of emotions when they deliver a punchline or express something openly. INFJs are capable of showing tenderness and empathy, but they can certainly be very deadpan people.

ENFJs often try to be easier to connect with, wanting to be empathetic and open people. While they use their sense of empathy and compassion to make themselves more accessible, ENFJs can certainly be naturally deadpan people. They still possess a sense of humor which can be a bit dark and direct, which certainly makes them capable of delivering things in a deadpan manner. While they care about others and want to be compassionate and friendly, they definitely have moments of being deeply deadpan.

INFPs are often seen as sweet and playful people, but this is on the surface and does not at all express their true personalities. While INFPs are caring and sensitive people, they are often sarcastic and extremely deadpan. INFPs enjoy different types of humor, sometimes humor which is darker and more deadpan than most people expect from them. They can deliver something in such a deadpan manner that people don’t even understand they are joking.

ENFPs are seen as bubbly and kind people, but they possess far more than this to their personalities. They also can be very deadpan, especially when they want to deliver a joke or comment in a more expressionless manner. ENFPs are capable of many different sides, and sometimes they can be sarcastic and deadpan when the situation calls for it. While they do enjoy being silly and playful, this isn’t all there is to them.

INTJs are often very deadpan people, even when they don’t intend to be. They are not great at openly expressing emotions and so even when they are expressing something more emotional, it doesn’t really come across that way. INTJs are more natural with their deadpan expressions, and are comfortable delivering their humor and intentions this way. While INTJs possess a lot of inner emotions and complexities, they just don’t express these things in a bubbly or open manner.

ENTJs are often deadpan people, especially when they are trying to express something sarcastic and humorous. ENTJs do have many sides to them though, and being deadpan is not a constant for them. They are capable of being a bit more open than their introverted counterparts, since they are social people who want to connect with others. ENTJs care about being someone who others can trust and rely on, especially when it comes to their loved ones. They have times when they want to be playful and outgoing, and other moments when their deadpan side comes to play.

INTPs are definitely deadpan people, sometimes even when they don’t want to be. They can struggle to openly express emotions, and when they think they are being too emotional and expressive they are often complete deadpan. INTPs just don’t find it natural to express things in a bubbly and soft manner, since this isn’t natural for them. They will try to express things openly but it almost always comes out deadpan and dry.

ENTPs are definitely capable of being deadpan, especially when they want to express things in a dry manner. ENTPs enjoy humor quite a bit, and often feel more comfortable with a deadpan or sarcastic way of expressing things. ENTPs can however be more playful, it just depends on their current mood and what they are trying to convey. Depending on their current situation the ENTP can be capable of expressing things on different levels.

ISTJs are often very deadpan people, especially when they are trying to be direct and focused. Their natural personalities are often more deadpan than they are openly expressive. ISTJs focus on getting things done, but they do often have great senses of humor which not everyone recognizes. This is because the ISTJs humor style is often more sarcastic and deadpan, to the point where people cannot always notice this.

ESTJs are often deadpan people, especially when it comes to their senses of humor. They don’t really express things openly and aren’t often bubbly types of people. They enjoy expressing things in a more deadpan manner, but sometimes this causes people to miss their jokes and not entirely understand where they are coming from. ESTJs can sometimes sound deadpan even when they are trying to express themselves and show more emotions.

ISFJs are capable of having a deadpan sense of humor, but this isn’t their go-to way of expressing. They prefer to be more open so that they can express their sense of compassion and warmth to others. ISFJs just want to be capable of making their loved ones feel comforted and safe around them. While deep down ISFJs might enjoy being deadpan, they don’t like to bring this out all of the time, especially when it might lead to misunderstandings.

ESFJs are certainly capable of being deadpan and of expressing things in a sarcastic manner. ESFJs might have a rather deadpan part of themselves they want to let out, but at the same time they want to be able to make others feel comfortable and at ease around them. They sometimes try to bury this part of themselves because they want to show their compassion and make sure they can create a sense of harmony and warmth in their environment.

ISTPs are naturally more deadpan people, especially when it comes to expressing emotions. Even if they want to let things out and be expressive, they often deliver things in a much more deadpan manner. For the ISTP deadpan and direct is just more natural for them than expressing things emotionally or playfully.

ESTPs can certainly be deadpan people, especially when they are delivering something humorous. They are capable of being more sincere and gentle than people often expect from them though. For the ESTP it depends who they are communicating with and what they are trying to express. When they are expressing things directly or for humors sake, they might prefer being more deadpan.

ISFPs aren’t usually the most deadpan people, since they are more open and in the moment. It isn’t that ISFPs don’t enjoy sometimes sarcastic or deadpan humor, it just isn’t as natural for them. They prefer when things are open and sincere, instead of hiding behind something else. For the ISFP when things aren’t laid out clearly it can become a bit annoying for them, and so being deadpan isn’t as natural for them.

ESFPs don’t really enjoy deadpan expressions and often prefer when things are more upfront. When something is hidden beneath layers of sarcasm and a deadpan expression it can be draining for the ESFP. They really prefer when things are more open and expressive, even when the humor is a bit sarcastic they don’t want it to be overly deadpan. For the ESFP this can feel insincere and truly draining, and really isn’t something they prefer.