Can You Be Abrasive at Times, Based on Your Personality Type 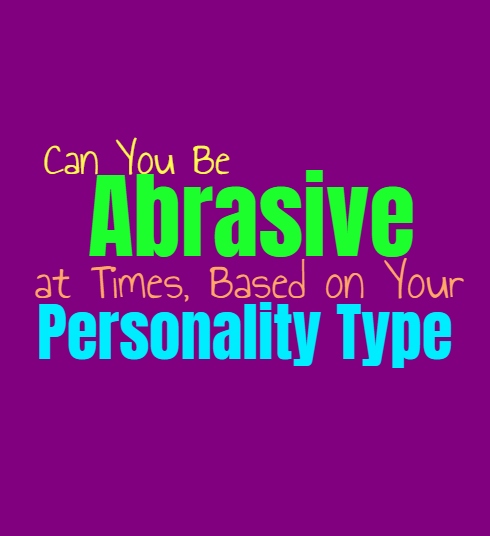 Can You Be Abrasive at Times, Based on Your Personality Type

Some people have a tendency to behave in a way which feels a bit abrasive to others. This can either be because they have over the top and in your face personalities, or because they can be a bit harsh in their delivery. Here is how abrasive you can be and why, based on your personality type.

INFJs don’t usually have abrasive personalities, since they keep to themselves a lot with things. They aren’t likely to express themselves openly and so they don’t often behave in a way that feels too abrasive. INFJs are also very aware of others and their needs, and can tell when someone finds their behavior to be too much. In these situations they know when the tone it back and be a bit less abrasive. Naturally they don’t have personalities which are too abrasive or hard to handle, since they are good at reading others and responding to them.

ENFJs are empathetic people so they can often tone things down when they are being abrasive. They do sometimes have over the top personalities though, especially when they are passionate about something. When the ENFJ gets excited about a subject sometimes they can go on chatting about it, and this can seem a bit abrasive to some people. To those who are less outgoing and chatty, the ENFJ might appear abrasive at times. Most of the time though, they like to make others feel comfortable and so they will tone it down.

INFPs are capable of keeping things to themselves and are often sensitive people. They don’t like being abrasive or behaving in a way which upsets others. They aren’t usually abrasive people since they prefer to give others their space and distance. They don’t enjoy when people get in their face and don’t give them room to breathe and so they aren’t often like this towards others. INFPs do have times when they want the attention of someone they love, and this can feel a bit needy but not necessarily abrasive.

ENFPs are outgoing people and sometimes this can feel a bit abrasive. Most of the time they don’t like to be too overboard with their behavior, but they express themselves openly. When the ENFP is feeling passionate and excited about something, they can be a little bit abrasive. They go after what they want and sometimes this can be hard for others to handle when the ENFP simply will stop at nothing to acquire these goals. They also can be occasionally needy when they want something from a specific person, and this can feel abrasive.

INTJs are not abrasive in the sense that they are in others faces, since they do believe in giving people space. While they may not go overboard in this way, INTJs can sometimes be abrasive in their own ways. They can sometimes be harsh and don’t always deliver things in a sensitive manner. They aren’t great at toning things down in order to be sensitive to the emotional needs of others, and this can be both abrasive and challenging for those around them sometimes.

ENTJs can be abrasive people sometimes, simply because they are honest and upfront people. When they are expressing a point it can sometimes come across abrasive, since they aren’t great at toning things down to be sensitive to others. They express the facts without really trying to hold back for the sake of someone else, and this can be a bit abrasive. ENTJs are also aggressive people, especially when they are going after what they want in life. This aggressive behavior can be a bit abrasive at times, especially for people who are more sensitive.

INTPs aren’t often abrasive since they prefer to be on their own and avoid people. They limit their interactions since they can become drained by too much socializing. INTPs also aren’t the type of people to be in someone’s face, instead they seem a bit more cool and collected in their behaviors. The only times INTPs might appear abrasive, is when they are being direct and expressing a fact to someone. They don’t always deliver things in a sensitive nature and so this can seem a bit abrasive and unintentionally hurtful at times.

ENTPs are sometimes abrasive people, since they don’t like holding back or pandering to spare someone’s feelings. ENTPs don’t want to hurt people, but they would rather be precise and accurate with their words. Sometimes they seek out debates as well, and this type of behavior can feel abrasive for those who don’t like drama or confrontation. ENTPs would rather be able to argue about things so they can learn more about the details and uncover little truths they didn’t quite know before.

ISTJs aren’t often abrasive people, since they like to keep to themselves and respect the boundaries of others. For them it is important to be courteous of others and what they need for space and distance. ISTJs won’t be in someone’s face when they need to be on their own, since they understand this desire. They do sometimes have a tendency to appear abrasive when they are being direct or trying to get something done, since they aren’t good at being sensitive to someone else’s emotions in this situation.

ESTJs do sometimes have abrasive personalities, since they are naturally aggressive people. They go after what they want and don’t like allowing anything to stand in their way. ESTJs also value efficiency and so when someone is being lazy or incapable of getting something done the ESTJ isn’t likely to just let this slide. They will express their thoughts very clearly, and they are not afraid of hurting someone’s feelings. ESTJs care about their loved ones but for them honesty is more important than sensitivity.

ISFJ
ISFJs are not usually abrasive people, since they care about being respectful of others. They care about how others feel and want to make them happy and comfortable. For the ISFJ it is important to take a step back and really think about how their actions will affect those around them. They try hard to be sensitive and don’t want to be seen as over the top people. ISFJs just aren’t naturally abrasive, and can actually be a bit more reserved than anything else.

ESFJs try not to be abrasive, since they want to be sensitive and respective of others. They can often tell when they are upsetting someone and so they will try to tone things down or take a step back when this happens. Their ability to connect with others and understand their needs, does often help the ESFJ avoid being too abrasive. The only times where the ESFJ might appear more abrasive, is when they are trying to help someone and that person really doesn’t want the help.

ISTPs don’t usually have abrasive personalities, since they are much more relaxed most of the time. They don’t like being over the top or pushing other people, they prefer to do things on their own most of the time. ISTPs understand how to respect others when they want space, since this is important for them as well. ISTPs are often seen as the chill and laid back people, instead of the abrasive types.

ESTPs can sometimes be a bit abrasive when they are passionate about something. When they become truly excited or worked up, there are times when their personality can feel a little bit abrasive. They express themselves openly and go after the things which inspire them most in life. ESTPs are outgoing people who enjoy really being able to feel comfortable being themselves, which can sometimes cause them to appear abrasive to people who are not prepared for it.

ISFPs aren’t often abrasive people, since they keep to themselves most of the time. They don’t like being too over the top around people who they do not understand or trust. When the ISFP does trust someone they might be a little bit more open to be themselves and even be a bit over the top. They aren’t usually abrasive though, since they are sensitive people who understand when someone needs their space and they won’t invade this in an obnoxious way.

ESFPs do sometimes have over the top personalities, which can be a bit abrasive for some. They express themselves openly, without allowing anything to hold them back. When the ESFP wants something they will stop at nothing to get it, and so this can feel a little bit abrasive for others. They don’t mind being a little wild when they want something, and simply want to go after what inspires them most. This can certainly make the ESFP abrasive to some people who cannot handle their intensity.