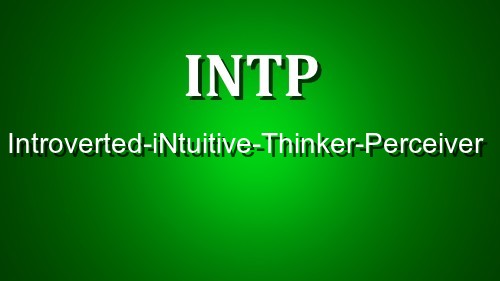 The first thing that you need to know about INTP is their functions. They have four main functions.

The four main functions of the INTP (in order) are:

First function would be Intraverted Thinking. And this basically means that they take everything internally and logically. The INTP wants everything to make sense and have sort of an internal framework on how everything works. And this will give them a better understanding of the world and their environment. This is introverted, so this is inward. So they might have a hard time expressing this to other people but it is how they see the world primarily.

And second is Extraverted Intuition or Ne. The INTP will use this function to examine possibilities and see situations in a multiple ways. They interpret a situation from multiple perspectives to figure out how certain people see things. It is an objective mindset that helps feed in into their intraverted thinking and helps them comprehend the world a little bit better by being objective about it.

Third is Introverted Sensing. This is developed a little bit later in the INTPs life. But basically, it is an appreciation for having things in order, thinking about the past, reflecting, and comparing it to the present. So, for example, they could use it to think about something that they’ve done or known about and see how that compares to what they currently perceive through extraordinary intuitions. They could use this Si to filter out the current situation and see how those compare and contrast and help to shape their world view even more.

And their final function is Extraverted Feeling. This is the weakest function of the four and it’s developed a lot later in life. It still never becomes really strong because it contradicts their Introverted Thinking with the world. INTPs can usually shut off this extraverted feeling. But what it does is understands other people’s feelings and emotions and empathizes with them. So, as an INTP develops, they could get a better sense of how what they say would it affect people instead of just saying something in a very detached way that others might interpret as offensive.

INTPs have many strengths. One of them is that they are very logical and analytical. They could figure anything out in their head and they are very good at figuring out systems and the way things work. This also makes them great troubleshooters. If something’s going wrong, or if something’s not working, they have really good ability to see what the biggest problem is, where the biggest bottle neck is, and just narrowing it down and knowing exactly what needs fixed. They have the ability to quickly ignore what is working and it’s just kind of natural ability to fix the broken system. Also, they can grasp underlying principles very easily. They can see how something works. For example, they can see how a car works or a motor and all the parts that connect between them. And they could grasp these underlying concepts pretty easily to figure out how the system works as a whole. This even applies to different things like physics, math and anything logic based. They just see these universal concepts and are able to use those and apply them to other parts of their lives that fit within their Intraverted Thinking.
Another strength is that INTPs are typically good-natured and have a good sense of humor. They can have a little of bit of an off-beat sense of humor. But most people find a way to appreciate that. And they also have relatively simple needs. If they’re in relationships or they’re with friends, they don’t really ask for too much. They don’t cause a much drama or anything like that. And they’re usually easy to live with and not too demanding.

While every type has their strengths, they also have weaknesses as well. A couple of the INTP weaknesses is that they can be very defensive or impatient with others. If somebody maybe attacks something that INTP feels very connected towards or knowledgable of, they might take a defensive stance towards the issue. They can also be a little bit standoff-ish, which can cause some problems. They can have a tendency to also a little bit impatient with people that don’t understand where they’re coming from.

They may dismiss others that they don’t see as intelligent when maybe that person just sees the world from a different point of view.
Another potential problem is that INTP may have trouble taking action on a decision. If they are INTP, they really like to understand the world and understand everything about it.
The thing is that this does take precedent over anything else including taking action on the conclusion that they have come up to. So, they almost have this catch 22 situation where knowing is enough and applying isn’t always necessary. This could frustrate people around them that are expected them to accomplish externally what they have concluded.

And they may also sometime dismiss emotions as illogical. If somebody is getting worked up about something and INTP does not think it makes sense, the INTP could really annoyed with that. This could cause the INTP to not even pay attention to their emotions or reactions which could cause some conflicts in a relationship or friendship.
They can also tend to be overly skeptical and cautious. And while these are good traits to have, to an extent, sometimes they could be too skeptical. Cautious is usually a good thing but sometimes an INTP might want to have too much information before they take action which could lead to a paralysis analysis sort of situation.

When the INTP is in a stressful situation they have the tendency to withdraw from the situation. The INTP can shut down and not want to deal with the world or the consequences of their actions.
This could make the situation worse, causing people to be frustrated with them being unavailable.
And when they’re stressed they may also become very angry and emotional.
Stress may also occur if they are put in a situation where they feel like they are not competent. That is really an uncomfortable place for an INTP to be because if they feel they are not competent or don’t understand what’s going on, it really messes with who they are as a person.
They derive a good deal of self esteem from being able to figure things out and if they are in a position that doesn’t play to their strengths it could overwhelm them a bit and cause them to be stressed out.
Another problem is when they’re stressed it could cause them to ignore others and live in their own head. So they could have their own conclusions that they might not share with other people. And this can cause a lot of misunderstandings.

There are also a couple of free reports on ways that an INTP can Grow as well as Careers that fit the INTP. If you just go ahead and enter your email below, check for the confirmation link, and then you will get the free report.

*We will occasionally email you about new postings on the site as well as ways that an INTP can grow and improve themselves.