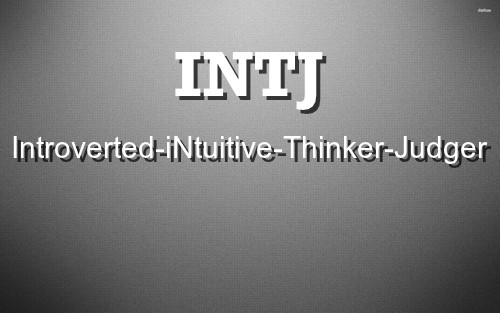 To understand the INTJ, the first thing that you need to know is the INTJs four main functions.

The four main functions of the INTJ (in order) are:

The INTJs first primary function is Introverted Intuition or Ni.This is basically their way of perceiving the world. They have this intuitive feel of how the world works and it is very perceptive. It sees connections between things and how they are going play out. They can use this to almost predict how future events are gonna play out go. It has sort of a mystical feel to it because it can be eerily accurate of how things are going to play out to a dismay of some people that might not understand this intuition. Since its introverted, they might have a hard time explaining this to other people. While they feel it, it might be tough to explain to somebody else.

INTJ second function is Extraverted Thinking or Te. And this is how they want to organize the external world. INTJ is a very good in anything that involves structure, accomplishing a task,  organizing their external environment, managing people or resources or anything like that. That’s Extraverted Thinking.

Now, their third function is Introverted Feeling or Fi. It is something that develops a little bit later in the INTJs life. It is a sort of moral compass. A sense of right and wrong. The convictions that an INTJ has. This is something that’s developed later in life and becomes stronger. It helps the INTJ understand what they believe and creates a cause for their actions.

And the final function of the INTJ is Extraverted Sensing or Se. This is developed a lot later in life. It never really become a strength because it goes against Introverted Intuition’s way of understanding the future and seeing how things are going to play out. Extraverted Sensing is more of a “living the moment” type of function and it’s very good at comprehending everything that is going on in the present moment. And this can be useful for accomplishing task that requires someone to force their way through to get their way a little bit. So they can use it in that sense. Also, it can come out if an INTJ is stressed. It could show up in ways that makes them do stuff to excess and not think about the future consequences of their actions.

The INTJ has a number of strengths. And one of their strengths is that they are able to handle conflict and criticism well. They’re very logical as a whole and so by using this logic and being primarily focused on that, they could brush off if someone’s criticism of them and they could use it constructively. They have a strong drive and determination. If they wanted to accomplish something they will set out to do it and usually get it done. That’s just a part of who they are as a person. They want to accomplish goals. They have a high sense of drive and determination. And they want to make sure that things are played out, and they are pretty structured about it. And they can be very insightful. Like I talked about before, their introverted intuition could help them see things that other people might not be able to comprehend yet. So they could use that to in some ways predict the future. And INTJs tend to be serious about relationships and responsibilities. They see people close to them as almost a duty and a responsibility to take care of or provide for. Once they set out to do something, they’ll do their best to follow through and take a lot of pride in it.

While every type has their strengths, every type also has a few weaknesses. And one weakness is that an INTJ can have is a poor understanding of emotions and understanding where other people are coming from. They can also be kind of dismissing of others because they find them to be illogical. And this can cause them to respond cold and illogically toward someone that might be looking for emotional support.

When somebody has a problem, by nature they would be thinking about ways to solve that problem whereas the person might just be looking for support to make them feel better.

So that could be a situation that could be tricky for an INTJ. They also have a tendency to believe that they’re always right. The INTJ is very perceptive and having introverted intuition, they can feel as if they know the future, and they see patterns and connections that could sometimes get the best of them if these are occasionally wrong. So that’s something that they will have to look out for. They have an urge to constantly improve things and while this is usually a strength, it could cause some difficulty with relationships and people close to them. They may have a desire of wanting that person to change they are in a way to improve themselves. While that is usually a good thing, it could definitely cause some stress to that person if they’re content with the way things currently are.

Also, for the INTJ when they are under stress, you may see that they become impulsive and do things to excess such as drinking or gambling. This behavior is something that is usually out of their nature but can definitely take a hold of them and lead them down a bad path. They can also become very sensitive to criticism. This could be a problem because by nature they want to constructively listen to feedback and improve themselves. But when they’re at the point of shutting it off, it could become a problem. Also they could express emotions in an intense and uncontrolled manner.. And since they don’t really deal with emotions too much this can cause it to be expressed in a way that might be inappropriate for the situation.

Check out 13 Ways You Are An INTJ!

And also, if you are interested, I have a couple of free reports on INTJ Growth and Jobs or Careers that an INTJ could be interested in. If you just go ahead and enter your email below, check for the confirmation link, and then you will get the free report.

*We will occasionally email you about new postings on the site as well as ways that an INTJ can grow and improve themselves.