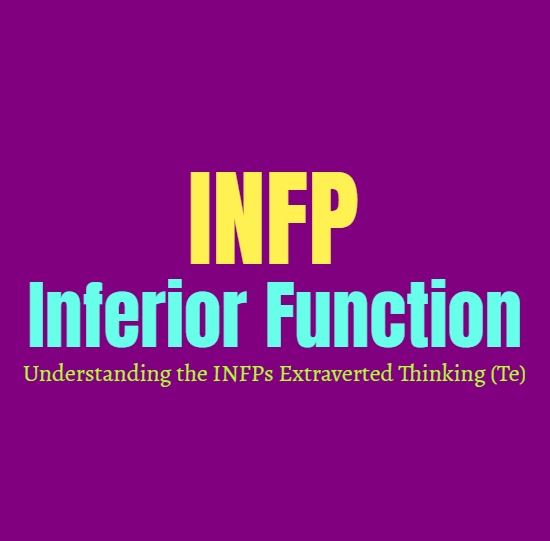 The INFPs inferior function is their extraverted thinking (Te), and is often utilized in smaller ways. This is still an important part of the INFPs behaviors and how they process the world, it is just expressed differently than their dominant introverted feeling (Fi). Extraverted thinking is a function which focuses on facts and logic, where as the INFP makes choices based on morals and inner belief systems. This doesn’t not mean they are illogical people and cannot process facts, they just don’t want this way of thinking to control or rule how they respond to the world. Instead INFPs are very focused on doing the right thing, and filter everything through their own internal set of ideals and morals. These functions do work together in some ways, helping the INFP to deal with certain details and facts in ways that might surprise people. This is why it is helpful to dig a little deeper, since the inferior function is not necessarily “weak” nor is it useless.

What Is Extraverted Thinking (Te)

Extraverted thinking or Te, is much more readily focused on facts and information, rather than emotions or people. This function is prone to making choices based on the facts, and will favor this over emotions or morals. People who use Te as their dominant function can see most moral choices are subjective, except for things which are obvious and even factually wrong. It is not likely to take emotions into account when it comes to making decisions, and will find this to be irrational and pointless. People who use Te as their dominant or auxiliary functions are often very direct and like to get to the point, rather than waste time. They are very focused on efficiency and getting things done, instead of allowing the feelings of others or themselves to prevent them from doing this. Te users can be very focused on the end result and ensuring that everything is in control and cared for properly. This can be difficult for as an inferior function, and can cause personality types like the INFP or ISFP to worry about their own logical abilities. They can become focused on picking apart details, since they might not see themselves as “intelligent” or logical people. While this is something they might not express outwardly, it is something they likely analyze and consider internally when no one is around. Combined with Fi, this function does still have certain values and ideals which are important regardless of where it is placed in their function stack.

The Role of the INFPs Inferior Function

When the INFP is using their inferior Te in healthy ways, it is something which aids them in being a bit more productive. They can see how certain processes work, and know how to problem solve with certain projects. It isn’t how the INFP responds to the world on a larger scale, and certainly isn’t a function they use when it comes to understanding themselves and their own needs better. For the INFP their extraverted thinking helps them to see things from a clear perspective, looking at the facts enough to be able to find a logical answer to the problem. INFPs will use this function when it is necessary, rather than allow it to help them make all of their choices. This is often what can help them when it comes to school work, or if they work in a career which requires certain types of perfunctory tasks and performances. It helps the INFP to clearly see the process and the steps, and be capable of executing to the best of their abilities. Even still this type of job can be draining for the INFP after a while, but using this Te helps them to get things done when they need to. It can help the INFP to make those quick choices and answer questions without having to search deep into their thoughts and feelings in order to figure out the right step to take. When the situation calls for practical responses the INFP is often more capable than most people realize, it just isn’t how they like to handle things most of the time.

When the INFP applies too much pressure onto their dominant function, or when they are going through times of extreme stress, their inferior function can come out to play in much less savory ways. This is something which can cause those Te habits to become exacerbated and even creates a more stressful environment for the INFP. When this occurs they likely become hyper-critical of everyone around them, as well as themselves. They attempt to focus on things which are pragmatic, always wanting to be “right” or logical in their choices. Instead of allowing their own emotions and values to take control, the INFP becomes drawn to over-analyzing and ensuring that they are making the smart and logical choice. During this time they can even become a bit moody, not realizing that they are being short-tempered with the people they love and are often so sensitive to. Their desire to focus on accuracy becomes something which overwhelms the INFPs focus, and makes them stress about things in ways they shouldn’t.