Here’s How Vague You Can Be, According to Your Personality Type 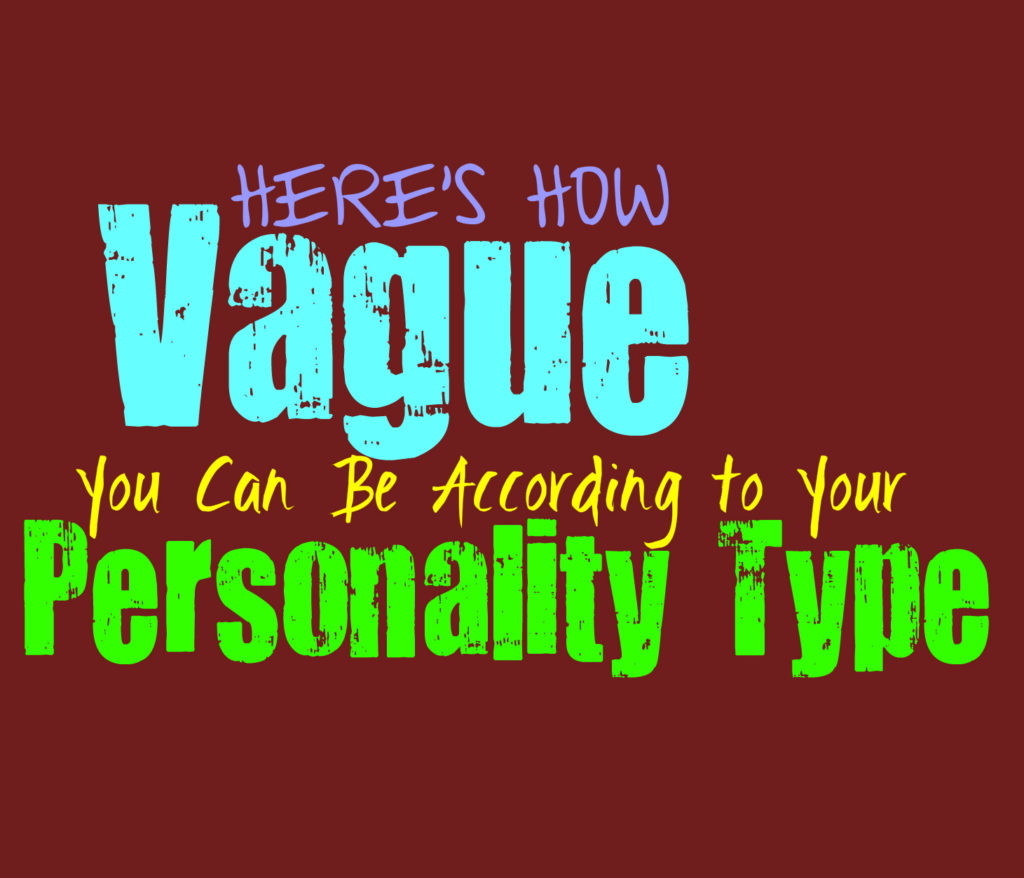 Here’s How Vague You Can Be, According to Your Personality Type

While some people are very concise with their wording, others can be a bit unintentionally vague. Here is how vague you can be, based on your personality type.

INFJs are not usually vague people, and enjoy being clear when they express themselves. They are best at being concise when they are writing, and have plenty of time to think things through. They have such active inner minds that they can become distracted sometimes, and it can be difficult for them to sift through their thoughts and feelings in order to express them properly. When the INFJ is allowed to write things out they will be extremely clear and concise to others.

ENFJs are expressive and open people, who enjoy being able to express themselves to others. They will be very clear with their wording, especially if they believe it is important. They want to be understood by others and want their loved ones to value what they say. ENFJs are great communicators, and realize that being clear is very important. They are rarely vague people, unless they are being this way intentionally in order to avoid being too expressive.

INFPs can seem vague sometimes, since their minds can go off on tangents. They try to be very specific though, and dislike feeling misunderstood. They really aren’t vague people, but sometimes their active thoughts can seem a bit intense to others. Sometimes their train of thought is difficult for other people to follow, simply because INFPs have rich and complex inner thoughts and feelings. They may not feel comfortable expressing themselves to everyone though, and only want to expose themselves to the people they can truly trust.

ENFPs are generally very detailed people, especially when they are expressing themselves. When they are being intent with their wording ENFPs are capable of bringing up impressive details. When they are distracted though, ENFPs can appear a bit vague to others. They might be talking out loud, while their internal train of thought is going into a million different directions. When this occurs the ENFP might not fully express the details of what they want to say, quite as well as they think.

INTJs are certainly not vague people, and express themselves with full intent. If they don’t want to openly make something clear, they simply won’t bother attempting to do so. When the INTJ speaks they want to be sure to be concise and express themselves very clearly to others. They do not like being misunderstood, and want to express their information very accurately to others. INTJs aren’t afraid of using details and facts in order to convey their point.

ENTJs are certainly not vague people, and prefer to be very clear with their wording. When they express themselves they are sure to be very on point with what they say. ENTJs are concise people who value efficiency in their lives. They do not enjoy anything that wastes time or energy, and being vague can do this. Vagueness is simply a lazy way of expressing oneself, and they want to be sure to word things in a way that people understand.

INTPs have such rich and incredibly active inner minds, but sometimes they struggle to express things outwardly. When the INTP is speaking they will try to be precise, but sometimes they think they have spoken more than they actually have. It can be difficult for them to process and express everything going on inside of their incredibly active minds. INTPs are logical and intelligent people, who love being able to analyze and understand information. While they can be much better at expressing things through writing, INTPs can seem a little vague when they are speaking.

ENTPs try not to be vague most of the time, but they can bounce from one thought to the next rather quickly. They have such incredibly active inner minds, and rich imaginations, this can make it difficult for them to express themselves in detail. When ENTPs are speaking they might jump to the next thoughts quickly and this can be difficult for others to follow. People cannot always follow the fast train of thought that the ENTP can go down, which can make them seem a little vague to others.

ISTJs are very detailed people, and will rarely be viewed as vague. They do not enjoy being misunderstood and want to be sure to express themselves very clearly to others. ISTJs are very capable of thinking outwardly and are often skilled at explaining themselves. ISTJs are hardworking and efficient people, who believe in getting things done. If they are vague or lack clarity, then they won’t be able to get things done effectively.

ESTJs are usually very clear and concise people, who prefer to be sure of things in life. When they are speaking they want to clearly convey what they are saying, and dislike being vague. If they are too vague it often means they won’t get things done as quickly and effectively as they need to. ESTJs are efficient people who value being able to be very direct and sure about their actions. They dislike being vague, and can become frustrated with people who aren’t clearer.

ISFJs are not usually vague people, but they can be a bit reserved. They don’t always feel comfortable expressing every detail openly, and prefer to keep to themselves oftentimes. ISFJs are hardworking people, who strive to take care of their loved ones. They don’t want to do anything that might hurt or upset them, so sometimes they leave certain information out. ISFJs can sometimes be vague, but this is usually intentional.

ESFJs don’t intend to be vague people, but they often have a lot on their minds. They try hard to care for their loved ones, and are often busy people. When they are doing many different things, they can become distracted and might leave details out of their conversations. ESFJs also have moments where they aren’t entirely decisive, and don’t want to seem too demanding. When they want to give people space the ESFJ can seem a bit vague with their wording.

ISTPs are generally precise people, when they feel comfortable expressing themselves. They can often avoid being too chatty with people, since they prefer to keep to themselves most of the time. ISTPs prefer accuracy, and what they do say will be very clear and concise. They don’t want to express themselves in a way that seems vague or lacking in directness.

ESTPs are expressive people, who enjoy being able to socialize. They do value accuracy and precision, so they try to be very direct when they speak. There are times when the ESTP will be vague though, since their thoughts are so internal. They can feel like they have expressed more than they actually have, and often keep things inside a lot. ESTPs want to be clear, they just aren’t always as expressive outwardly as they would like to be.

ISFPs are warm people, who enjoy being able to express their feelings openly. They certainly try not to be vague, since they do know what they want and what they are feeling. ISFPs can sometimes become distracted though, which makes them leave out some details. When ISFPs are focused on telling a specific store, they will be very clear and detailed about what they are explaining.

ESFPs can sometimes seem vague to others, simply because their thoughts seem to run away from them. They can bounce from one thought to the next rather quickly, which might cause them to express themselves in usual ways. People might not always be able to follow the ESFPs train of thought, since they can become rather easily distracted. They don’t want to be vague, they just aren’t obsessed with the small details.