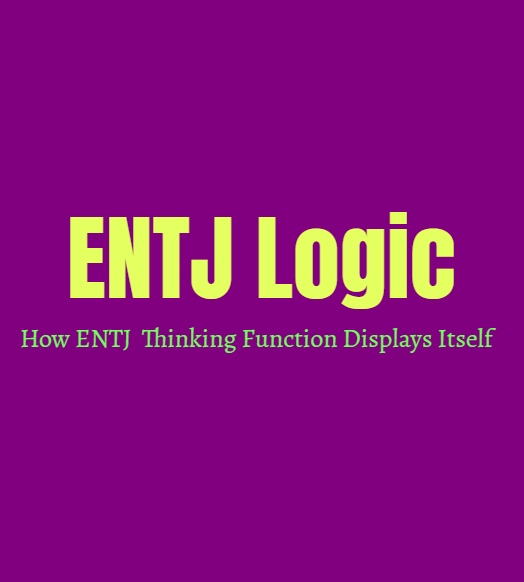 ENTJs are definitely very logic minded people who focus a lot on their thinking function. The ENTJs dominant function is actually their extraverted thinking and so it plays a major role in how they process information. For the ENTJ using this thinking function is what makes them so driven towards facts and accuracy, and is also what makes it is important to the ENTJ to always be efficient in everything they do. They don’t like wasting time or energy on things which could get in their way or prevent them from getting the job done properly. People who are overly emotional are rather draining for the ENTJ, since logic and reason are their main priority.

ENTJs are very focused on facts and details, and don’t like leaving anything to chance. Their extraverted thinking is their dominant function and this plays a major role in their sense of drive and motivation. This thinking skill causes the ENTJ to push themselves to get things done and focus on their goals ahead. They combine this with their introverted intuition which gives them a more in depth vision of the future and how to plan accordingly. ENTJs are very much focused on being efficient and so they don’t like leaving anything to change. Their thinking function helps them to pick up on all of the details and facts, and collects this information over time to help them strategize properly. They prefer to plan ahead since this helps them to be sure of themselves and the steps they need to take. Their extraverted thinking really does help the ENTJ gain a sense of confidence in themselves and their own choices. Once they have decided something they are completely sure of this, and because of that they don’t allow others to sway them. The ENTJ is confident because they have already spent so much time researching and learning about something, using their Te to help them plan and strategize the best course of action. This gives them that sense of direction and so the ENTJ doesn’t find it easy to be convinced otherwise.

ENTJs make their choices fairly quickly to the outside world, but have often spent a while picking up on information both consciously and subconsciously. They prepare themselves for many different possible scenarios, and believe in always being ready for what is to come. They are decisive people and this is owed in large part to their thinking function and their ability to naturally comprehend the information in front of them. This Te does often drive the ENTJ to be rather direct, and to some people this can appear somewhat harsh. For the ENTJ it isn’t about upsetting people or trying to appear aggressive, it is simply about being accurate and focusing on efficiency above emotions. They don’t believe in sugar-coating things in hopes of being sensitive to someone’s feelings, instead they feel that honesty is far more valuable and shows a great deal more respect towards someone.

The ENTJs thinking function is outwardly displayed rather naturally, and is often hard to miss. The ENTJ is direct and focused because of this, and is almost always capable of organizing things in order to get the job done. They are also natural leaders, and are skilled at finding ways to command a room and bring their team together the right way. The ENTJ is often seen as an intense and focused person, driven to accomplish their goals and completely unapologetic about this part of themselves. Their confidence is something which translates well into a work setting, and the ENTJ is often seen pushing themselves to the top of their career ladder.

The ENTJ is also a rather direct person when they are focused on a task, and this can be seen as intense at times. They don’t allow anything to stand in their way and sometimes this can be intimidating to those around them. They simply don’t favor emotions over logic, and instead feel like it is important to push aside feelings when they are trying to get something done. This is simply because facts and logic are things the ENTJ can trust to be true, while emotions are often fleeting and difficult for them to utilize in order to be efficient and accomplish their goals.

The greatest weakness with the ENTJ utilizing their thinking function so much, is simply that they neglect their emotions for long periods of time. The ENTJ can become so focused on getting things done and always being efficiently focused on their work, that they neglect their emotions. They push aside their inner feelings in favor of facts and logic, and prefer things they can prove and be sure of. This causes them to bury emotions which can ultimately become unhealthy for the ENTJ and those around them. While spending too much time on feelings is not good for the ENTJ, they do need to give themselves some portion of time to really process what they are experiencing emotionally. Everyone needs to be capable of sifting through and accepting their own feelings, as well as being able to pay attention to the emotions of their loved ones. For the ENTJ it is beneficial if they learn to strengthen their inferior feeling function, so that they can become more self-aware and not feel the need to bury their emotions or avoid them so adamantly.