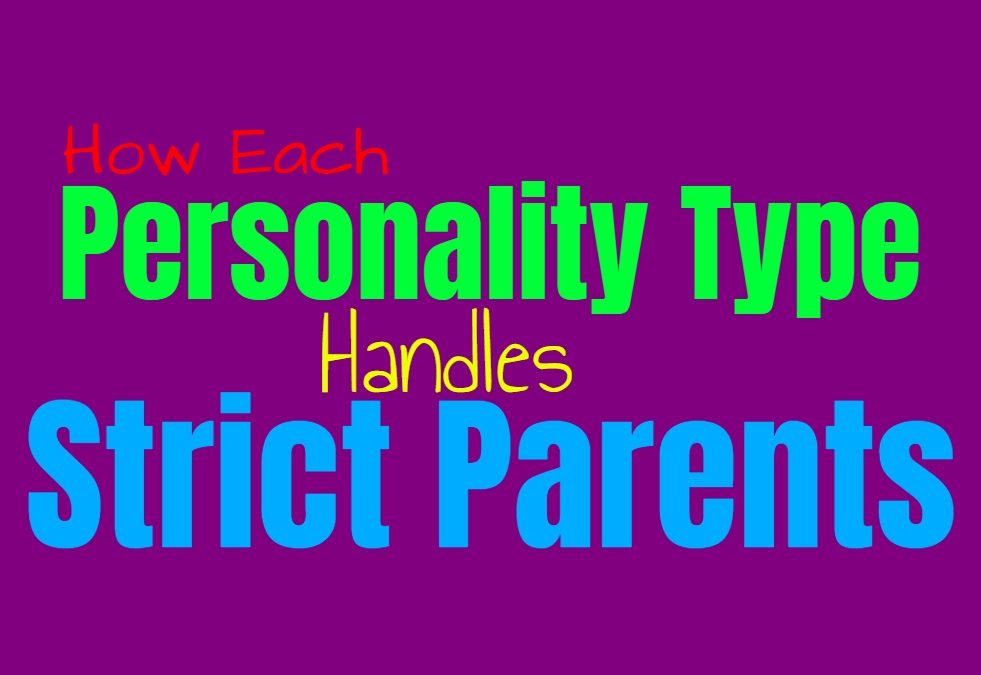 For some people dealing with strict parents means they need to rebel against it, for others it often causes them to adhere to their wishes as best they can. Here is how each personality type responds to having strict parents.

INFJs as children often do their best to please their parents, and will not want to upset them. At the same time they will be likely to go through a rebellious stage, they just might hide these things from their parents. The INFJ will find themselves breaking rules and going against what their family wants, but at the same time they hide this from them and don’t want them to actually witness their misbehaving. They can have a hard time really fighting against their strict parents, and this type of controlling environment is actually very unhealthy for the INFJ in the long run.

ENFJs often respond to strict parents by trying their best to please them constantly. When they are still living in the household of their parents, the ENFJ finds it difficult to really come against their wishes. They are naturally people pleasers and want to do their very best to make those around them happy. For the ENFJ child who endures strict parents, it often pushes them to overachieve and do their best to follow the rules. While they likely find themselves needing an escape when they are on their own, and this escape might include breaking those very rules they try to follow around their parents.

INFPs with strict parents certainly struggle in this type of household. They are independent spirits who need space and room to grow. If the INFP feels like they are being controlled, they will have a hard time adhering to this or really following those rules. They don’t want to disappoint their parents, and so this is often very painful for the INFP. While they want to please their family, they simply cannot go against who they are and what they believe in. So they often find themselves battling with their family, and struggle to feel like they fit in, in an authoritative household.

ENFPs are independent people with strong personalities, and so they do often struggle with strict parents. If they grow up with too many rules they will find themselves struggling to really follow them. Even if the ENFP wants to please their parents, they have a hard time focusing on these many rules and will struggle to adhere to all of them. They need to follow their own path and so they are often seen as the rebellious one in the family, even if this is not their intention.

INTJs don’t mind rules, as long as they make logical sense to them. They can often handle strict parents fairly well, as long as they explain things and give reasons for what they expect from the INTJ child. They do have a tendency to challenge things though, and this can make them troublesome for a stricter parent. INTJs want to be capable of doing things efficiently, but they are also very independent from a young age. They will likely want to escape this strict household eventually, but they find ways to manage the environment most of the time.

ENTJs can often handle a stricter household, since they don’t mind following rules. They often want to please their parents more than people realize, and dislike disappointing their loved ones. The ENTJ child is often good at living up to expectations and will do their best to follow the rules placed before them. As they get older this does become more difficult though, especially if they disagree with what their parents want to do.

While INTPs often put pressure on themselves to please their family, they also have a hard time following through with this. A household that has too many rules and restrictions, is going to be extremely stifling for the young INTP. When they are children they are even more inquisitive, and want to feel free to explore different options. INTPs can sometimes feel different from everyone else, and so feeling like their own parents are trying to restrain their minds is going to leave them feeling defeated in a lot of ways.

ENTPs don’t do well with following rules and often struggle to adhere to them. They want the freedom to follow their own path and this is something they feel from a young age. The ENTP growing up in a strict household might struggle to actually follow the rules and fit into what their parents want from them. This can lead to them being seen as rebellious, when really they are just struggling to understand why they are being restricted so much.

ISTJs can often handle a strict household, since they are naturally good at following rules. ISTJs want to please their parents often from a young age, and will do their best to fit into their expectations. While this can also put a lot of pressure on the ISTJ, they try their hardest to cope with it. They already can be hard on themselves, without the pressures of their family being placed on them as well. ISTJs simply want to live up to expectations and work hard to always be improving.

ESTJs do often handle stricter parents fairly well, since they are good at adhering to rules. As long as these rules are laid out clearly in front of them, they won’t have a hard time following or understanding them. ESTJs do become frustrated with parents who change their rules and don’t seem to be capable of setting their standards clearly. If the rules are easy to understand the ESTJ will try their best to do everything to the best of their ability.

While ISFJs will follow the rules and do their best to please their strict parents, this type of household can actually be a bit damaging for them. ISFJs naturally strive to take care of their family and want to please everyone around them. When they have parents who are strict and hard on them, it adds more pressure than they really need. The ISFJ who has strict parents can sometimes become more timid, and might have a hard time finding their own voice.

While ESFJs can often follow the rules and do their best to please their parents, a strict household can be hard on them. They already put too much pressure on themselves to make others happy, and so they will often push themselves to the breaking point when they have strict parents with high expectations. The ESFJ who grows up with strict parents also finds themselves struggling to really find their own voice, and might lose themselves a bit.

ISTPs often struggle with a strict environment of any kind, especially as children. If they grow up with strict parents they will often find themselves rebelling against this. The ISTP will find themselves trying to find ways to escape whenever they can, and might even move out at a younger age. They don’t want to displease their parents, but they don’t naturally find themselves capable of bending to what other people expect.

ESTPs are often rebellious when they are younger, especially if they grow up in a strict household. They don’t do this to be cruel to their parents, they just struggle to really follow rules. For the ESTP it is easier to do their own things and they find themselves taking risks in the moment without always thinking about the consequences. They aren’t good at focusing on what is around the corner, and so they will often rebel against strict parents.

ISFPs do want to please their parents, but at the same time they don’t find it easy to follow rules. ISFPs are inspired by their own path and inner desires, and so when they have a strict environment they often fail to adhere to this. While the ISFP will be upset by the fact that they struggle to follow the rules, it doesn’t make it easier for them to do so. ISFPs with strict parents often feel out of place and completely misunderstood.

ESFPs are not rule following people by nature, and so a strict household is very difficult for them. When ESFPs have to grow up with strict parents they find themselves completely smothered and misunderstood. They will likely rebel against their parents often, and might get into arguments with them on a constant basis. This isn’t something the ESFP enjoys doing, but they just don’t find it natural to follow constant rules.