How Do You Handle Having Inadequacies, According to Your Personality Type 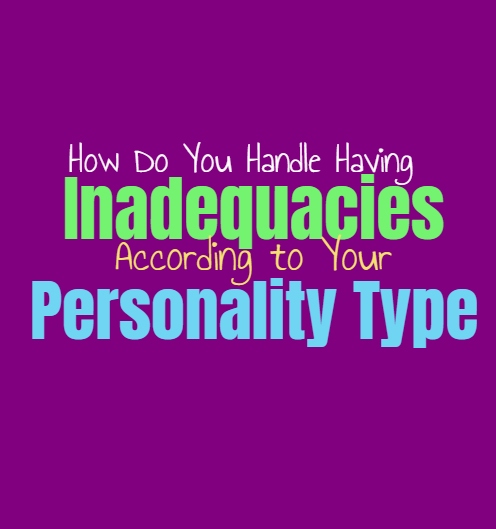 How Do You Handle Having Inadequacies, According to Your Personality Type

For some people the feeling of being inadequate is deeply troubling and simply something they cannot just accept. For others it is not a major problem to feel a bit inadequate, and they simply search for ways to improve and become what they want to be. Here is how you handle feeling inadequate, according to your personality type.

INFJs definitely have a hard time when it comes to feel inadequate, and struggle with this deeply. They want to feel like they are enough for those around them, always trying to be someone who can provide comfort and support to others. INFJs can put a lot of pressure on themselves to succeed and to be someone who impresses those around them. They have high standards and so feeling inadequate in any way can be truly difficult for them to cope with. They might even find themselves become angry over this and blaming themselves over it.

ENFJs definitely don’t handle inadequacies well at all, since they want to feel accomplished and capable of just about anything. ENFJs care about being able to provide for their loved ones and work hard to make them happy. They don’t want to feel as if they have failed in any way, and feeling inadequate is honestly one of the worst things for them. They want to be seen as competent and capable people who can do just about anything to perfection.

INFPs can certainly struggle with feeling a sense of inadequacy, and this is something which plagues them. They don’t want to feel as if they could be doing better and just aren’t meeting their goals and abilities. INFPs care about being someone who lives up to their expectations and upholds their own inner morals. If they feel like they are inadequate it often makes them fear that their loved ones will be disappointed in them and abandon them because of it. INFPs can be hard on themselves even though people might not see this outwardly.

ENFPs don’t like feeling a sense of inadequacy at all, and can become rather frustrated by this. They have a hard time feeling like they aren’t doing good enough or their abilities just aren’t meeting expectations. ENFPs often want to be skilled at everything they do, not enjoying the thought that there are people who are doing better than they are. When the ENFP fails at something they often feel lacking and even stupid, while this is likely untrue the ENFP still struggles with these inner doubts.

INTJs don’t care for inadequacies at all, and rarely will they just accept them. If they feel as if they are inadequate with something, they want to improve and work hard to meet their own high expectations. For the INTJ it is frustrating to be in a situation where they feel inadequate, but they don’t simply back down and give up if this happens. Instead they take on this challenge and find ways to improve and become more than competent and adequate in everything they do.

ENTJs don’t accept inadequacies in their lives, much like they do not stand for inefficiency. When they feel as if they could be better at something they simply work hard to improve upon these skills. ENTJs don’t accept failings in themselves, and will often do whatever it takes to become the best they can possibly be. When they feel inadequate it simply means they need to take this challenge and find ways of becoming better.

INTPs can struggle with feeling inadequate in different areas of their lives, but this isn’t something they want to experience by any means. INTPs don’t often feel inadequate when it comes to intellectual things, since they enjoy the chance to learn more and continue growing their inner minds. Where the INTP might struggle is when it comes to relationships or emotions, and in these situations they don’t like feeling inadequate or like they aren’t understanding the situation properly. They want to be able to be supportive and connect with others, and so feeling like they aren’t doing good enough is upsetting.

ENTPs definitely don’t enjoy feeling inadequate, but they often take this as a challenge and an opportunity to improve themselves. If the ENTP isn’t good enough at something they do whatever it takes to find ways to improve and become even better than everyone else. They are often strong-willed people with imaginative and rich inner minds, making them capable of immense growth. When the ENTP feels inadequate it can be upsetting at first, but they often strive to improve.

ISTJs don’t want to accept inadequacies in themselves, instead they want to find ways to improve. If they feel as if they could be better at something the ISTJ will do what they must to make this happen. They aren’t okay with failing for falling behind, instead they want to push themselves to get better and to become someone who is skilled and impressive in their craft and pretty much any situation.

ESTJs do not simply accept inadequacies, instead they want to improve themselves and become better at pretty much everything they do. ESTJs don’t handle feeling like failures all that well, instead they want to become better and always be capable of accomplishing their goals. ESTJs don’t simply accept failure as an option, they strive to be efficient and accomplished people in their lives. They will push forward and do whatever they must to get the job done and to improve upon their skills.

ISFJs are often hard on themselves when it comes to having inadequacies, instead they want to always be perfect for those around them. ISFJs don’t like failing or feeling as if they are not good enough. They will often try to hide any inadequacies, and find ways to improve upon them in the future. They don’t like showing that they make mistakes, since this can cause them to let down the people they love and this is often too much for the ISFJ to truly bare.

ESFJs really don’t handle feeling inadequate, instead they want to always be improving and find ways to become the best at whatever they do. They want to be someone who impresses their loved ones and they care deeply about pleasing them. When it comes to inadequacies ESFJs really don’t like accepting their failings, instead they want to find ways of removing them. They strive for a sense of perfection and can be rather hard on themselves when it comes to this.

ISTPs don’t take feeling inadequate as something to hold them back, they often ignore these feelings and try to push past them. ISTPs live in the present and don’t become hung up on past failings or mistakes. They realize they must learn from these errors and finds ways to improve and reach for what they want. ISTPs don’t often feel inadequate, unless it pertains to expressing emotions within a relationship. These situations can actually be challenging for them and leaving them feeling a bit frustrated.

ESTPs like to live in the present and don’t want to become hung up on inadequacies. They prefer to continue moving forward when they make a mistake and want to find ways to improve. If someone they care for does notice these inadequacies it becomes a bit more frustrating and upsetting for the ESTP. They want to be able to impress those around them and don’t want their loved ones to see them as inadequate.

For the ISFP inadequacies are only a problem when their loved ones seem to harp on these mistakes. When this happens they can feel rather overwhelmed and struggle inwardly. They want their loved ones to accept them for who they are, flaws and all. When it seems as if the people around them are not accepting their little inadequacies and mistakes, the ISFP really does struggle with this.

ESFPs don’t like focusing on inadequacies, instead they want to focus on being positive and moving forward. Instead of allowing these feelings to weigh them down, the ESFP wants to pay closer attention to the things they do well and the people who appreciate them. They don’t want to spend every moment obsessive over mistakes, instead ESFPs prefer to focus on the positive and happy things in their lives.