Do You Tend to Stir the Pot, According to Your Personality Type 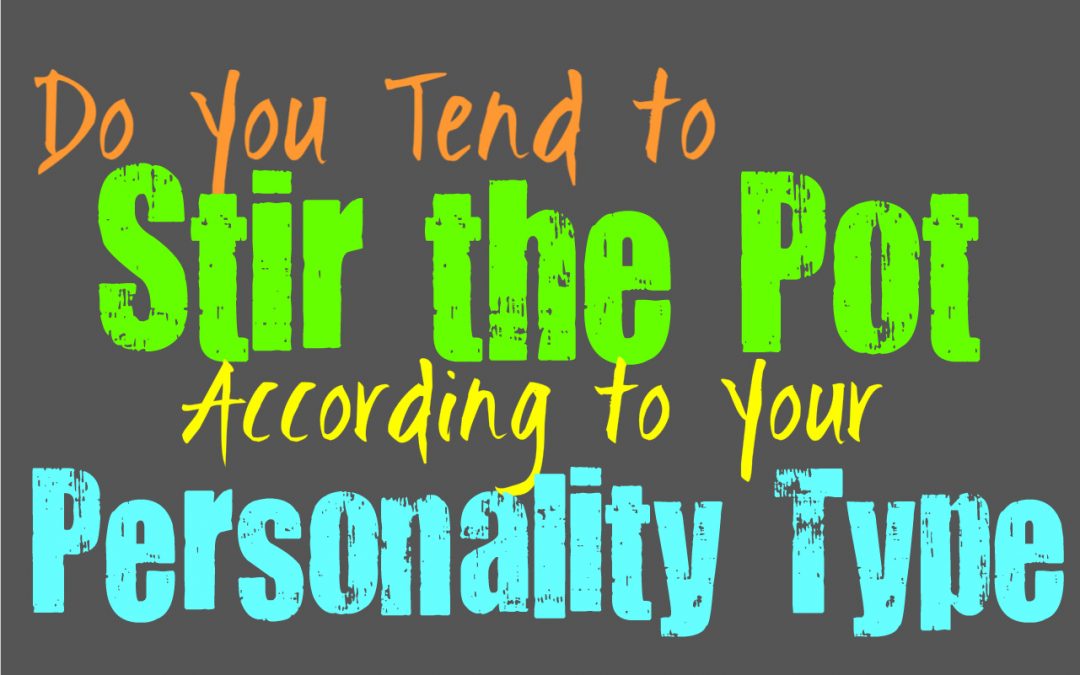 Do You Tend to Stir the Pot, According to Your Personality Type

Some people naturally stir the pot, and even enjoy creating a bit more drama around them. This isn’t always done maliciously, but in some cases it is all about pushing the limits. For some people stirring the pot and creating drama is truly exhausting and not something they want to be around. Here is how much you stir the pot, based on your personality type.

INFJs don’t usually like stirring the pot, especially if it will be harmful for people. Most of the time INFJs don’t like too much drama, since this can be emotionally draining for them. They can behave differently depending on who they are close to though, and so some behaviors can vary. INFJs are complex people who have many different layers to their personality, and so they don’t always behave as expected or predicted. When they are around someone they love who might enjoy stirring the pot a bit, the INFJ might engage in this behavior and might find it a bit amusing at times.

ENFJs do sometimes enjoy stirring the pot, as long as they aren’t deeply hurting anyone. If their actions aren’t going to cause any damage, than stirring the pot just a little bit can be entertaining. For the ENFJ the drama they like building is only in situations where it will fade away quickly and not cause any serious problems with people. They do sometimes get caught up in a clique mentality if they are around people who can stir the pot a lot. ENFJs don’t like hurting people, but they do like a little innocent drama on occasion.

Most of the time INFP do avoid drama and stirring the pot, since they don’t really like engaging in these situations. Sometimes having to deal with the aftermath can be far too exhausting for the INFP, especially since they need so much time to themselves. While in most situations they don’t like to stir the pot, there are moments when the INFP might enjoy pushing buttons to see how people respond. They can become bored easily and in the right surroundings they might enjoy stirring the pot just a tiny bit to see how it pans out.

ENFPs do sometimes stir the pot, simply for the fun of seeing how things turn out. They like to really shake things up since they become bored so easily. When the ENFP is feeling stagnant or truly bored, they do have a tendency to stir the pot and really push people’s limits. Sometimes they will do something simply for the sake of getting a rise out of someone, and this can be truly entertaining for them sometimes. ENFPs don’t intend to really hurt anyone, they just want to shake things up a bit and put a little more spice into a situation.

INTJs aren’t usually pot stirrers, simply because this can seem rather pointless for them. In many situations too much drama is just a way to keep them distracted from the things that are actually important in their lives. Most of the time the INTJ will find this to be foolish and completely obnoxious. While they aren’t often people who like to stir the pot, there might be certain circumstances were they change their minds. If for some reason the INTJ needs to teach someone a lesson, or simply get a small amount of payback for something, they won’t might stirring up a little drama in their direction.

In most situations ENTJs really don’t bother stirring the pot, since this can seem a little foolish to them. They prefer to focus on more realistic and important things in their lives, and want to maintain a sense of drive towards building their future. Allowing things to get in their way or distract them from what matters, isn’t something they are often interested in. There are some moments where the ENTJ might actually feel like stirring the pot, simply to see how things turn out. Sometimes situations this is because they think someone might need a little more drama in their lives, and so they are just providing it.

INTPs have a unique way of approaching things, and so sometimes they do believe in shaking things up. When they feel like a situation is completely boring and in need of some drama, they aren’t afraid of stirring the pot a bit. INTPs enjoy learning and observing and sometimes poking things just to see what happens. For them stirring the pot is often done in a more scientific manner, since they are naturally curious about how things might turn out. While they might get a little tired of drama in their own personal lives, they don’t mind it in a more distant way.

ENTPs don’t mind stirring the pot a bit, especially when they are truly curious to see how things turn out. They want to push buttons and create a little drama so that they can uncover some underlying information. Sometimes ENTPs want to stir the pot just to see how people behave and what the results of the situation are. For them it is more rewarding to see how things will change, than to just assume. They often have theories and different potential outcomes and this often makes them even more curious.

ISTJs really aren’t likely to stir the pot, instead they often try to avoid this drama entirely. They don’t usually enjoy any kind of drama, since this can feel rather childish for them. They would rather focus on the things that are valuable and rewarding for them, which does not include pointless theatrics. ISTJs value being able to get things done and don’t like wasting their energy on silly things. For them stirring the pot is rarely something they are interested in, only in extremely circumstances would it even make sense for them.

ESTJs aren’t often pot stirring people, since they don’t like drama most of the time. ESTJs would rather focus on the things they find important and valuable in their lives. For them it is best to work towards making their lives better and work towards making the future they want. For the ESTJ it is better to focus on taking care of their loved ones, and they rarely want to stir things up when they should just leave it be. For them causing drama where it does not belong is really just exhausting and immature.

ISFJs aren’t often pot stirring people, simply because they believe in creating harmony. They work hard to make peace in their environment, and don’t want to do anything that will stir things up in a negative way. For the ISFJ maintaining this harmony is vital, and so they don’t want to stir the pot if it will harm this. While they don’t like stirring the pot, there are times when they might be interested or curious in certain drama outside of their personal lives.

ESFJs aren’t usually interested in stirring the pot, especially if it will harm their loved ones in some way. They want to create a sense of comfort and harmony in their environments, and so they avoid certain kinds of drama. In most situations the ESFJ doesn’t want to stir the pot or shake things up, especially if it will hurt someone or create too much drama where they do not want it. There are times when the ESFJ might be around a loved one who is a bit of a pot stirrer, and they can occasionally get caught up in this with them.

ISTPs do sometimes stir the pot if they feel like it will be entertaining or exciting in some ways. They don’t mine certain kinds of drama if it will really shake things up. For the ISTP pointless and immature drama is something that can drain them, especially if people are just ranting about things they find a bit moronic. ISTPs do find themselves intrigued by stirring the pot occasionally, especially if it will make for some entertainment or surprising results.

ESTPs can sometimes stir the pot, especially when they are younger. The young ESTP might find it interesting the stir the pot and shake things up a bit, mostly for the sake of entertainment. They hate feeling stagnant or bored and really want to find things which will excite them a bit. When the ESTP is feeling like their lives need something a little more exciting, they might enjoy stirring the pot and finding ways to change the situation and make it more entertaining for them.

ISFPs do like to stir the pot on occasion, especially if they can do this without really immersing themselves in it too much. They simply don’t like being bored and prefer to seek out things which are more exciting and thrilling. While they don’t want to do anything that will seriously hurt people, just a little bit of drama is all in good fun. ISFPs can certainly stir the pot, especially if they want to see how things will pan out in that situation.

ESFPs do sometimes stir the pot, especially if they are doing it with a more playful intent. They don’t usually do this to harm anyone, they simply want to a little bit of entertainment in their lives. ESFPs dislike when things become boring or stagnant and so sometimes they seek out a little bit of drama. They might stir the pot just to see how things turn out, or simply because they want to push someone’s buttons because they feel it is deserved.