Is Your Mind Open to Impossible Things, Based on Your Personality Type 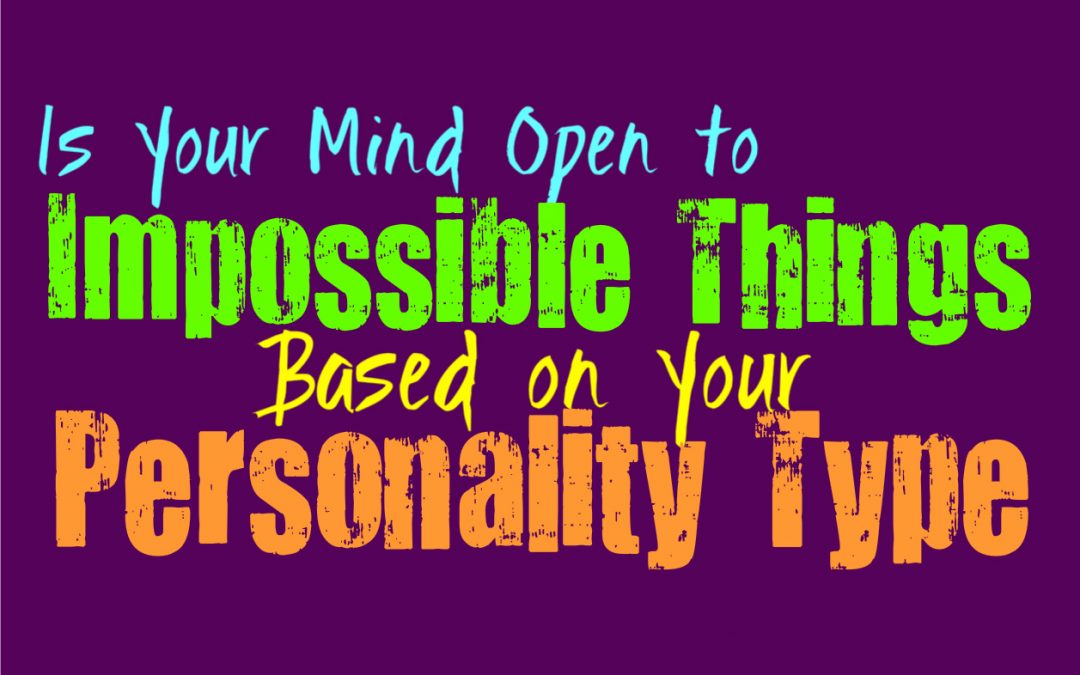 Is Your Mind Open to Impossible Things, Based on Your Personality Type

Some people are more prone to believing things which seem impossible, or in the very least highly improbable. For others it is far too challenging to believe in things they cannot see proven right in front of them. It isn’t easy to simply believe in something without some sort of tangible evidence, but some people find themselves much more open to these beliefs. Here is how capable you are of believing in the impossible, based on your personality type.

INFJs are sometimes more practical people, but their minds are capable of opening up to different possibilities. In most situations they are drawn to things they can see backed up with proof, simply because they like being sure. INFJs don’t like depending on or relying on things they cannot prove, simply because it can prevent them from doing things the right way. While their minds might be capable of believing in something which seems more improbable or even impossible, they don’t like using it as something they will depend on to get things done.

ENFJs can be more open minded than people realize, but this isn’t something they often show to others. They simply prefer to focus on more practical things, things which can be proven or trusted by their intuition. ENFJs minds absorb information and use these facts to come to future conclusions, and so this is based on facts more than most can fully comprehend. ENFJs usually are more drawn to what they can see proven, and so believing in something which seems impossible can really stand in their way. They don’t want to seem foolish or reckless because they believe in doing their best to get things done.

INFPs are often very open minded people, which means they sometimes believe in the things which seem unrealistic or impossible. For the INFP it is important to keep their minds open to possibilities, and they might enjoy considering the things other people deem improbable or impossible. They really enjoy diving into these unique thoughts and ideas, and feel satisfied by being able to dive down this sort of rabbit hole of imagination. They don’t like feeling blocked in to one way of thinking and so the INFP will explore things other people might avoid.

ENFPs are extremely imaginative people who can be rather open minded most of the time. They enjoy considering ideas and beliefs which might seem impossible to others, simply because they like exploring the possibilities. While ENFPs might not adapt these beliefs completely, they do enjoy thinking about them and considering the different angles. Their minds are deeply curious and analytical, and so ENFPs can become bored by things which are too predictable or ordinary.

INTJs are definitely not likely to be open to things which seem improbably, and those which are deemed impossible are definitely not going to be followed by them. INTJs prefer to focus on the things which can be proven and which makes logical sense. They base their beliefs on facts and information, instead of ideas which might be a bit unreasonable. INTJs prefer to analyze their information so that they can uncover the solid and proven truth behind everything. For them considering these seemingly impossible ideas can feel a bit like a waste of time and energy which could be better spent elsewhere.

ENTJs are drawn to facts and evidence which is proven and can be tangible seen. For them opening their minds to impossible beliefs feels a bit foolish and like a waste of their time. ENTJs don’t like following these ideas which aren’t completely reasonable, instead they strive to uncover the truth which they can tangible see and understand. To the ENTJ people who are constantly following things which are not readily proven, are simply being foolish and unreasonable.

INTPs have vivid imaginations and they do enjoy considering things which seem improbable or even impossible to some. While to others these things might seem crazy or impossible, INTPs can often see deeper and consider the possibilities without restrictions. Their minds can grasp and imagine so many different things, and so this helps them to really open up to ideas which other people are afraid to really venture towards. For the INTP simply following the path that has already been mapped out, is boring and leaves them feeling trapped.

ENTPs are imaginative people who enjoy considering different possibilities which others might be afraid of. They are open minded people who believe in really diving into new things, even if they seem a bit impossible to others. ENTPs realize that not everything is what it seems, and so they want to be able to consider things from different angles before simply believing what people tell them. For the ENTP it is rewarding to dive into something and learn as much as they can about, before actually making their decision about what is true.

ISTJs are very practical people who prefer to focus on things which can be proven true. They follow methods which have already been used and are efficient and effective. For the ISTJ following things which seem improbable or impossible, is just not something they are interested in. They want to do what is best for themselves and their families, and this means focusing on things they can see as tangible and proven.

ESTJs aren’t interested in impossible ideas, instead they focus on what has been proven. They follow the facts in order to be more efficient and focused people. ESTJs believe in working hard to achieve their goals and build a life they can be proud of. They are natural providers who want to be sure they can take care of their family. For the ESTJ not being able to get the job done with a sense of efficiency feels like a major failure, and so they aren’t really drawn to things which could stand in the way their goals.

ISFJs aren’t usually the type of people who enjoy seemingly impossible ideas or accomplishments, instead they strive for what is practical and reasonable. They want to take care of their loved ones and work hard to get things done, and so they do whatever they must in order to do this. For the ISFJ it is important to follow their goals and work hard to provide for the people in their lives. They care about their loved ones and they show this by doing what they know is right. ISFJs aren’t always seen as open minded people, but this is simply because they want to focus on facts.

ESFJs are more practical people, since anything else can stand in their way and prevent them from doing what is important to them. For the ESFJ following impossible beliefs and ideas can feel a bit reckless, especially if this curiosity prevents them from providing for their loved ones. They can be open to certain things but they don’t want this openness to hold them back in any way. ESFJs do sometimes have a certain level of imagination which allows them to consider things which seem unrealistic to others, they just usually keep this to themselves.

ISTPs are factual people who believe in following evidence and information which is in front of them. They go after what is tangible and true, instead of what is unrealistic and even improbable. For the ISTP if something is deemed completely impossible, they aren’t likely to become curious and want to dive into this subject since it feels like a waste of their time and energy. ISTPs enjoy facts and logic, and so this is where they spend their time focusing.

ESTPs are highly factual people and so they really don’t enjoy diving into things which have been deemed impossible. For them this feels like a waste of their time and energy, and seems a bit foolish. They base their information on facts which have been proven ready, and so they know they won’t be spreading inaccurate information. ESTPs are drawn to what is tangible and what is real, instead of fanciful ideas which are likely to be a bit crazy.

ISFPs can actually be rather imaginative people, and so they do sometimes consider things which seem unrealistic or even impossible to others. While this is something that often goes on inside of their minds, ISFPs enjoy allowing themselves to really consider these different possibilities. They don’t like focusing on the mundane and instead enjoy diving into thoughts and ideas which are enriching and unique. For the ISFP sometimes considering the impossible, is a rewarding experience.

ESFPs can have a practical and curious side to their personality, which can have them at odds with themselves in some ways. They do sometimes find themselves interested in things which seem completely crazy or impossible to others. For the ESFP it is about opening their minds to different things, and allowing their imagination to run a bit wild from time to time. They simply hate feeling stifled or contained, and enjoy being able to consider things which seem a bit out there.