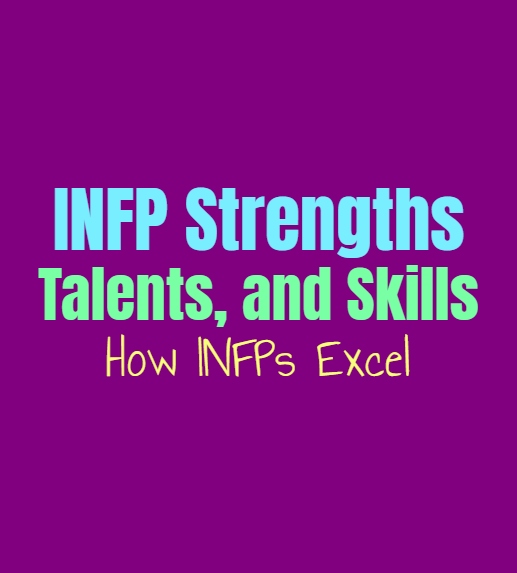 We all have our own unique strengths and special skills which naturally emerge from within us. Some of these strengths might not be ones we expect or ones which are quite as obvious or in your face. While some of these inner talents aren’t necessarily the ones people look for, that doesn’t make them any less valuable or unique. For some personality types there are these natural places in which they will excel and certain skills which they often possess. INFPs are naturally talented people with many unique skills that people might not even recognize on the outside. There are places in which they want to advance and grow, but there are also places in which they will naturally excel.

The INFPs natural creativity and imagination is not something to be ignored or scoffed at. This creative inner world of theirs is something which should be viewed as an incredible and impressive strength. This helps the INFP excel in the artistic world, capable of coming up with new ideas that most people would never imagine. They aren’t afraid of taking risks in order to make their creations beautiful and truly special. This imagination helps the INFP truly excel in most things which are creative- whether this be music, movies, painting, drawing, writing or anything that involved using this inner mind to create something out of almost nothing. INFPs can also excel when it comes to careers and positions which take a lot of ingenuity. They can see the possibilities that others just cannot, and are capable of finding new ways to approach what is in front of them.

When the INFP is asked to use their imagination they are certainly going to excel. Of course there are times when feeling obligated to do so might change their approach a bit. When the INFP is in situations where they are allowed to use their sense of creativity, they are going to be capable of showing their true talents and abilities in a rather impressive manner. Their minds are unique and filled with so much imagination, and the INFP often feels happiest when they are allowed to let this roam free. They enjoy creating things and bringing something new and beautiful into the world.

INFPs are also intuitive people who can see the bigger picture better than most can. They can see the many different possibilities in the situation, which helps them to come up with ways of solving the puzzle and problems in front of them. Most people won’t initially view the warm and imaginative INFP as being capable of this, but in truth they are. They can be excellent at problem solving and analyzing the situation in new ways. The talent is that INFPs are capable of approaching the problem from different angles, and can see things that most people will likely miss or be blind to. INFPs dig deeper than just looking at the surface, and this is actually quite an impressive and useful skill.

When the INFP is enlisted to solve a puzzle and approach it from their intuitive minds, they can often come up with very different ways of figuring out the answers. This unique approach is what helps them to gain a new perspective and often they are capable of solving the puzzles in front of them. INFPs might not always feel a natural motivation to do this, but that doesn’t mean they won’t excel in these situations if they are so inspired. INFPs can be truly talented when it comes to solving these puzzles and using their intuition to follow their own “gut” in the right direction. The problem is that people can easily underestimate the INFP, not realizing just how capable and talented they can be in more ways than just their creativity.

INFPs are actually rather quick learners and enjoy exploring new things. Their minds can pick up on things surprisingly fast, which helps them adapt in new situations. While others might take time to learn the process and want to be prepared for each step, the INFP enjoys diving right in. They become bored easily if they aren’t being stimulated enough, and so they actually like being able to pick things up quickly and move onto the next exploration. Their quick minds and wit helps the INFP to excel in new situations, and adapt where others might feel a bit lost or stuck.

INFPs excel in a fast pace situation much more than they do something mundane or slow. When the INFP seems uninspired and even a bit stagnant, is when their surroundings just to keep their minds stimulated in the right direction. When they are stuck in a monotonous situation the INFP feels trapped, where as a fast paced and exciting environment is more likely to be where the INFP will excel and be capable of really showing their skills and abilities.

Charming When They Want to Be

INFPs are sometimes seen as shy and internalized people, but in truth they are capable of being very charming. It might require them expending a lot of energy for the INFP to be those charming and expressive people, but it is still a natural skill they possess. This is why INFPs can make for excellent performers, they just find that this type of career can be both rewarding and emotionally exhausting for them. While they might be drained from this that doesn’t mean the INFP can not be excellent at it. They do have a talent for being charming and entertaining, which can often be rather surprising for those around them. While people might expect the INFP to be quiet and shy, they actually have rather larger than life personalities waiting to emerge. Because of this they do have a knack for being the center of attention and can be excellent performers. Many of the most popular and well-known celebrities are actually types as INFPs.